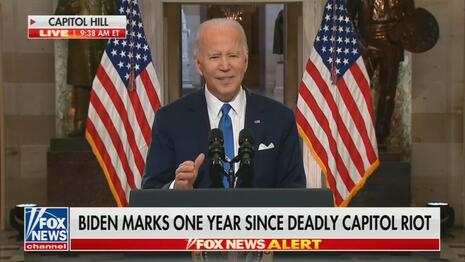 CNN and MSNBC spent over 1,600 minutes Thursday obsessing over the first anniversary of the January 6 riot on the U.S. Capitol, but it failed to translate into any success in the ratings department.

Thanks to early numbers from Nielsen Media Research, the Fox News Channel cruised to an easy victory in both total viewers with roughly 1.567 million and 245,000 in the 25-54 demographic.

According to a Fox News press release, FNC defeated CNN “in every hour across both categories” as the Jeff Zucker-led channel was only able to fetch 742,869 total viewers overall and 139,202 across Thursday in the demo.

MSNBC was able to best CNN in total viewers with about 1.049 million viewers, but narrowly lost in the 25-54 group as the Comcast-owned property garnered just 136,019 viewers.

And in the key 9:00 a.m. to 11:00 a.m. Eastern block during which President Biden and Vice President Harris delivered remarks from Statuary Hall, CNN and MSNBC still couldn’t pull in a sizable audience.

CNN’s gambit that Americans would tune into see rank partisanship and destructive rhetoric failed as, according to Fox, “CNN also failed to break 1.5 million viewers in any hour throughout the day” and both CNN and MSNBC lost “nearly 90 percent” of their primetime demo and total viewers compared to the same date a year ago.