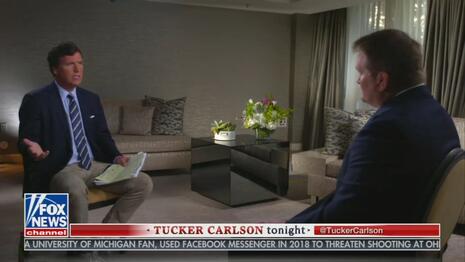 The numbers were in for Tucker Carlson’s Tuesday night interview with Tony Bobulinski and they’re gigantic. According to numbers released early Wednesday night, Carlson pulled in 7.562 million viewers for the bombshell interview with direct evidence of the Biden family’s rank corruption, including a phone call with Biden associate Bob Walker pleading with Bobulinski not to go public.

Tucker’s 7.562 million total viewers (and 1.54 million in the 25-54 demo) led the way Tuesday for not only the Fox News Channel, but all of cable television and came in third on broadcast networks, trailing game six of the World Series (on the Fox broadcast network with 12.627 million) and NBC’s The Voice (7.761 million).

That meant Carlson beat out ABC’s The Bachelorette, the season premiere of NBC’s This Is Us, and special primetime episodes of CBS’s Let’s Make a Deal and The Price Is Right.

FNC primetime had an average of 6.243 million viewers (and 1.254 million in the demo) that finished above ABC, CBS, CNN, and MSNBC.

For an interview that was so expansive and newsworthy, ABC, CBS, CNN, MSNBC, and NBC all willfully refused to cover the Bobulinski interview as part of their continuing effort to fluff the pillows of the Biden campaign.

The interview came on the heels of Tucker Carlson Tonight’s strongest month ever with an average of over 5.3 million total viewers in October and 670,000 in the 25-54 demo that even surpassed the CBS Evening News with Norah O’Donnell.

According to an FNC press release, that “marked...the highest-rated monthly viewership of any program in the history of cable news.”

Here's more from that press release, which included FNC expanding its primetime advantage over CNN in the 25-54 demo by 99 percent and record monthly ratings for Hannity and The Ingraham Angle (click “expand”):

In total day, FNC garnered 2.3 million viewers, 428,000 with A25-54 and 274,000 in the A18-49 demo, holding a 65 percent advantage over CNN in total viewers. The network also delivered the second highest-rated total day viewership in the history of cable news...In primetime, FNC delivered 4.9 million viewers, 971,000 in the 25-54 demographic, and 670,000 in the A18-49 demo, and widened its advantage over CNN by 99 percent. The network also claimed the number one spot in total viewers as well as both younger demographics in the 9AM-5PM/ET dayside hours.

In October, the FNC claimed 69 of the top 100 cable telecasts in total viewers and delivered 32 telecasts with over 5 million total viewers. FNC also comprised the top two telecasts in all of cable during special coverage of both presidential debates. Notably, FNC’s primetime lineup, including Hannity, Tucker Carlson Tonight, and The Ingraham Angle, all earned their highest-rated months in history in both total viewers and in the demo. Additionally, FOX News @ Night with anchor Shannon Bream also secured the program’s highest-rated month in overall viewers

FNC’s primetime powerhouse lineup swept the top spots in cable news across the board and the weekday lineup surpassed broadcast in primetime summer to date. At 9PM/ET, Hannity followed as the second most-watched program across the board with 5.1 million viewers, nearly 1 million in the 25-54 demo (982,000), and 657,000 in the 18-49 demo. Hannity also recorded the program’s highest-rated month across both categories since the program launched. Both Hannity and Tucker Carlson Tonight made cable news history as the two highest-rated primetime cable news programs ever for an entire month.

The Ingraham Angle also made cable news history, earning the highest-rated primetime program for a female host. The program crushed the 10PM/ET timeslot with over 4 million viewers and 760,000 in the 25-54 demo, outpacing the competition in both categories and hitting a new milestone earning over 4 million viewers for the first time ever, making The Ingraham Angle the most-watched 10PM/ET program in cable news ever. The Ingraham Angle also secured its highest-rated month in both total viewers and in the key demo this month, handedly surpassing MSNBC’s Rachel Maddow as the most-watched woman in cable news.

As for Zuckerville, they’re busy promoting a CNN contributor who lied to them on-air about whether he was the anti-Trump author known as Anonymous. And MSNBC? They’re having a totally normal day.

So while CNN and MSNBC continue to dicker, FNC has kept on trucking.