They Think You’re Morons: CNN Carries Less Than Half of Coronavirus Briefing 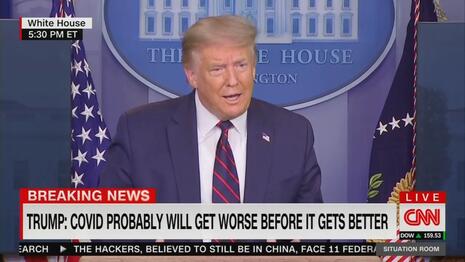 Showing how much they not only hate the American people but think they’re unintelligent, CNN carried less than half of the first episode of the reincarnated White House Coronavirus Task Force briefing, choosing to wait until the question and answer portion to allow viewers to listen to the latest news and thinking of President Trump.

All told, they carried 12 minutes and 18 seconds of the briefing, which lasted roughly 26 minutes and 11 seconds and works out to 46.9 percent. In contrast, MSNBC carried 91 percent of the briefing and left for just under three minutes before Q&A in the name of “a little fact-checking on the President” featuring Antifa supporter Chuck Todd and former Democratic Party operative Dr. Vin Gupta.

And predictably, the Fox News Channel carried the full briefing in its entirety. In other words, it was a return to normal from season one of the briefings when CNN carried only 69 percent of the briefings' runtime from March 30 to April 14, leaving over seven hours unaired.

Trump stepped to the podium at about 5:11 p.m. Eastern with FNC and MSNBC immediately cutting into hear from the President. Meanwhile, CNN’s Situation Room and host Wolf Blitzer kept serve, insisting that you heard from Zuckerville residents only seeing as how they supposedly live in facts.

Blitzer went to commercial break at 5:13 p.m. Eastern acting as though the briefing had yet to take place: “Up next, the first White House coronavirus briefing in almost three months as the pandemic ravages parts of the United States.”

He returned five minutes later promising that CNN was “watching all the late-breaking developments in the coronavirus pandemic,” but that didn’t include the briefing for another seven minutes.

Instead, he relied on chief political analyst Gloria Borger and former Planned Parenthood president Dr. Leana Wen (which, again, they didn’t disclose) to poison viewers with their spin on the briefing that they weren’t hearing for themselves.

Borger ruled that viewers shouldn’t take seriously or even respect the return of the briefings because they’re going to be entirely political.

“This is a President who wants this to be his show, doesn't want anyone else on the stage with him and I think that what we know from the President being alone is that this is largely about his poll numbers and about his re-election,” Borger huffed.

As for Wen, she was upset that the President was appearing solo. Here was a snippet (click “expand”):

I would like to see, Wolf, public health experts leading the briefing because this is a public health crisis and their voices should be at the forefront. Then I want to hear the science. I want to hear real numbers about what is the state of the outbreak. Trusted messengers would tell us what's happening, not try to paint a rosy picture for what they wish was happening, what we all wish were happening, but what's actually happening. Where are the surges? What are we the most concerned about?

Then I want to hear them also explain the science. These are the top scientists and public health leaders in the world. I want them to tell us about what's happening with vaccine trials, what's happening with treatment. How did they come up with these guidelines, for example, around school re-opening? What's the science behind that? That's top of mind for so many people. And then finally, and I actually think most importantly, I want to hear an acknowledgment of what are the problems that actually local officials, state officials, hospitals are facing?

And as we saw after the briefing, CNN continued to feed its personal fetish for fear and panic, chastising the President for expressing any sense of hope on any front of the pandemic. They also complained that Trump occasionally spoke using notes. Really.

Yet another reminder that these are fundamentally unserious people.

CNN’s refusal to let the public hear from the President was bought and paid for (and thus supported) by Clear Choice and USAA. Follow the links in the previous sentence to help fight back against the sophomoric liberal media.