All Aboard the Crazy Train! Here’s the Ten Craziest WH Briefing Moments 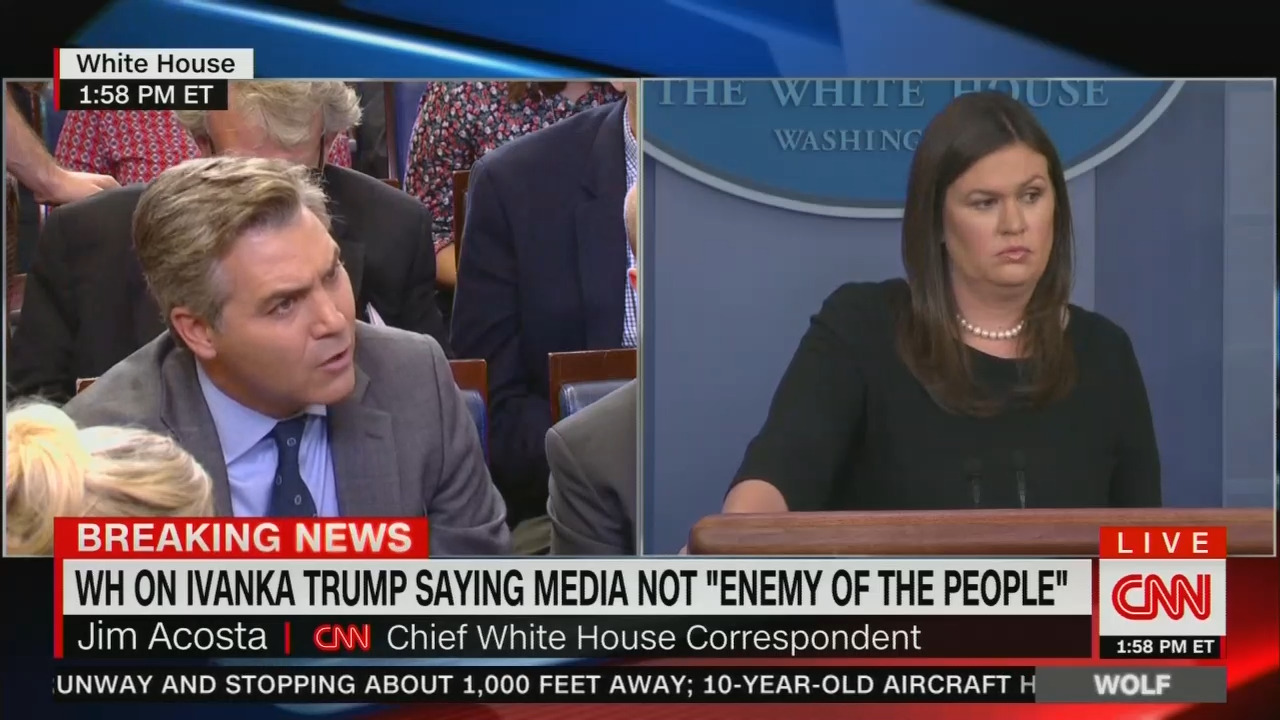 Though they decreased dramatically in frequency as 2018 wore on, the year still offered plenty of aggravating and head-scratching moments inside the White House Briefing Room.

Whether it was CNN chief White House correspondent Jim Acosta making a fool of himself, CNN political analyst April Ryan trying to make herself into a martyr, or most of the press corps questioning the President’s mental state, there were any number of possible nominees.

Without any further adieu, here are 10 of the nuttiest moments from 2018 White House press briefings, presented in chronological order with the original NewsBusters headlines.

Alexander asked Press Secretary Sarah Huckabee Sanders if Trump tweeting about having a button to launch nuclear weapons should leave “Americans...concerned about the President’s mental fitness.” Months before North Korea’s Kim Jong-un and Trump met in Singapore, Sanders shot back that Americans should instead “be concerned about” Kim’s “mental fitness.”

At the end of the briefing, Walker wanted to know if Trump was “engaging in authoritarian behavior” because he’s “attacking critics and key institutions in our democracy.” Where did these two get their questions? Brian Stelter?

The single craziest briefing took place on January 16 when then-White House physician and Navy Rear Admiral Dr. Ronny Jackson spoke about the results of the President’s physical exam. As this writer stated at the time, over a half-dozen reporters asked questions that pertained to the President’s mental state.

For ABC’s Cecilia Vega and CBS’s Margaret Brennan, both asked if the President showed any signs of Alzheimer’s disease. Whether it was Acosta, CBS News Radio’s Steven Portnoy or even The Washington Post’s Ashley Parker, the press corps were hellbent on finding any possible result from the President’s physical to conclude he was battling a mental illness and/or could be removed from office via the 25th Amendment.

A few weeks after the Parkland school shooting, Acosta sought to show Sanders on February 26 who was king when it came to gun control, asserting that “a lot of parents...are worried” that arming people inside schools for security purposes would “turn into a situation like the Wild West.” At no point did Acosta think that there would be people supportive of having more armed security or trained teachers to have weapons to defend their students, but facts are often difficult for Jim to grasp.

4. Sanders Torpedoes Acosta for His ‘Unnecessary’ ‘Tone’ in Press Briefings; ‘I’m Finished With You’

The April 25 briefing focused in part on the U.S. tumbling to 45th in the World Press Freedom Index, so it was the perfect occasion for CNN’s Captain America to flex his muscles.

With Ryan’s urging, Acosta threw a fit about the lack of respect for a free press by the White House and Sanders responded in kind by absolutely roasting him by lamenting that she’s taken “your questions in a tone that's completely unnecessary, unneeded and frankly doesn't help further the conversation or help the American people get any more information in a better way, which is your job and my job and that's what I'm trying to do.”

On May 1, Ryan offered quite the doozy of a question the wondered if Donald Trump has been an illegitimate President:

Payoffs, hush money, Russia trolls, Facebook, WikiLeaks, DNC hack, Comey e-mail investigations on the eve of the election, allegations of collusion. Do these issues give support to those who say, who offer questions about the President's legitimacy?

Ah, yes, so what would the Obama presidency be since there were scandals involving Benghazi, the IRS, the NSA, and the VA to name a few? And most know about at least a few of Bill Clinton’s problems. But it’s safe to say Ryan wouldn’t wonder about the legitimacy of those presidencies.

In mid-May, there were deadly protests along the Israeli/Gaza border coinciding with the opening of the U.S. Embassay in Jerusalem and so that gave the press corps the chance to flaunt their anti-Israel bent, trying to convince then-Deputy White House Press Secretary Raj Shah that the Israelis were responsible (rather than the Palestinians).

Reuters correspondent Steve Holland wondered if the U.S. would demand the Israelis “use restraint” while NBC’s Alexander later came up with an insane question about whether the Israelis have a right to “just kill at will,” doing nothing to point out how Hamas is a terrorist organization and used the protests as a propaganda tool.

Both were followed by Qatari-funded Al Jazeera English correpsondent Kimberly Halkett inquiring whether the Israel should “shoulder some of the blame” and accused the White House of being “in denial of the split screen reality” with the Embassy’s opening and the protests.

7. Sanders Rips into Liberal Media: If They ‘Want to Defend MS-13, They’re More Than Welcome to’

The press were up in arms on May 17 over the President calling illegal immigrant gang members and MS-13 “animals,” so it fell to Sanders to tell the press that, considering how censed they were with the President calling out some of the most violent criminals on Earth: “If the media and liberals want to defend MS-13, they're more than welcome to.” Kaboom.

My colleague Scott Whitlock had the story following the June 14 briefing when there was a CNN-wide meltdown over the illegal immigrant crisis at the U.S-Mexico border.

Acosta demanded: “The Attorney General earlier today said that somehow there's a justification for this in the Bible. Where does it say in the Bible that it's moral to take children away from their mothers?”

Political analyst, Playboy writer, and Sentinel Newspapers editor Brian Karem literally screamed at Sanders: “Come on, Sarah! You’re a parent! Don’t you have any empathy for what these people are going through?”

Sanders schooled Karem by telling him that “I know you want to get some TV time” before Karem again shouted the same question.

Fast-forwarding to August 2, Acosta demanded Sanders answer once and for all whether the “press is not the enemy of the people.” The carnival barker smugly declared that “I think it would be a good thing if you were to say right here at this briefing that the press, the people who are gathered in this room right now, doing their jobs every day, asking questions of officials like the ones you brought forward earlier, are not the enemy of the people. I think we — we deserve that.”

Sanders swatted him, telling him that she “politely waited and I even called on you despite the fact that you interrupted me when” she was trying to call on someone else.

She added that “[i]t’s ironic, Jim, that not only you and the media attack the President for his rhetoric when they frequently lower the level of conversation in this country repeatedly.”

Days after both the mail bomber was arrested and the Pittsburgh synagogue shooting, Sanders held a rare briefing on October 29 and numerous journalists used the occasion to berate Sanders by directly and indirectly suggesting that the President was responsible for both tragedies.

ABC’s Jonathan Karl wondered whether Trump had “any concern at all that his words could inspire or provoke troubled people to do awful things” and specifically his criticism of illegal immigrants and the media giving disturbed people an impetus to commit violence.

The AP’s Jill Colvin struck a similar tone, wondering if Trump will “stop using that kind of language in light of the fact that these individuals were targeted in this attack,” but no briefing would be complete without an Acosta lecture to Sanders that the President should stop calling them the “enemy of the people.” It’s always about you, Jim. It’s always about you.