This Is the Left: Fox’s Shannon Bream Forced to ‘Bail’ on SCOTUS Set After Threats, ‘Volatile’ Scene

UPDATE, 11:56 p.m. Eastern: Bream repeatedly elaborated on her tweets during Fox News @ Night with the first coming while speaking to Nebraska Republican Senator Ben Sasse in the A-Block.

Sasse pointed out that the interview was supposed to have taken place at the Court, but “it was a little loud out there” and Bream added that “it got a little too rowdy out there at the Court tonight.”

“Last year, there were certainly protesters out there and there was definitely opposition to justice Gorsuch upon his name being announced that night. Tonight, we saw something different. We did have a plan to have our show out their live. It got so volatile at points that we — we ultimately didn't feel like it would be safe to do an hour of live television out there,” she explained.

Throughout the show, she again hinted at it, telling panelists at the end of one segment that “[t]here’s definitely no kumbaya happening out there on the steps, but there is here tonight” while stating in another to Tony Perkins that there were “folks out there on the steps of the Supreme Court” that aren’t fans of him.

For more examples, check out the transcript at the bottom of this post.

Late Monday night, Fox News @ Night host and Supreme Court correspondent Shannon Bream tweeted that she had to flee her live shot from outside the Supreme Court after having “felt threatened” by the “very volatile” “mood” by the far-left protesters having conniptions over President Trump’s nomination of Brett Kavanaugh for the nation’s high Court. 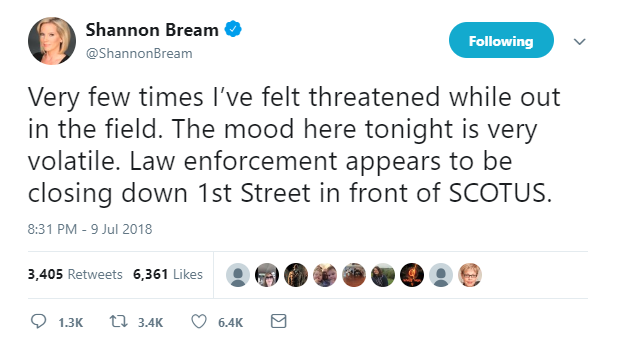 Just under an hour later, she followed up that she “literally had to bail” on her spot with other journalists in the interest of her “safety”: 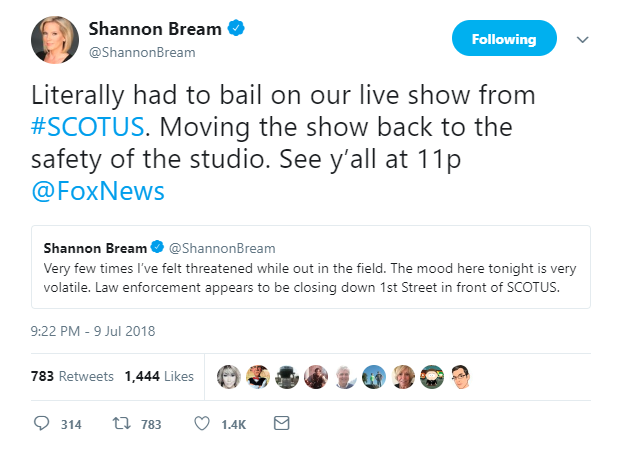 For some time, the CNN media team have tried to delegitimize and squelch any media criticism from outside the liberal media bubble under the guise of it being responsible for triggering death threats and creating a culture of verbal harassment against journalists (most notably at Trump rallies).

Throw in past scenes of harassment against White House officials, Senators, Trump supporters, and anyone not fully onboard with The Resistance and it’s no surprise that the next step for the perpetual leftist, violent mob is to go after conservative reporters or anyone not with, say, CNN or MSNBC.

NEBRASKA REPUBLICAN SENATOR BEN SASSE: You know, last year when Gorsuch was packed, you and I were supposed to be doing our interview on the Court — on the steps of the Court tonight —

SHANNON BREAM: It got a little too rowdy out there at the Court tonight. 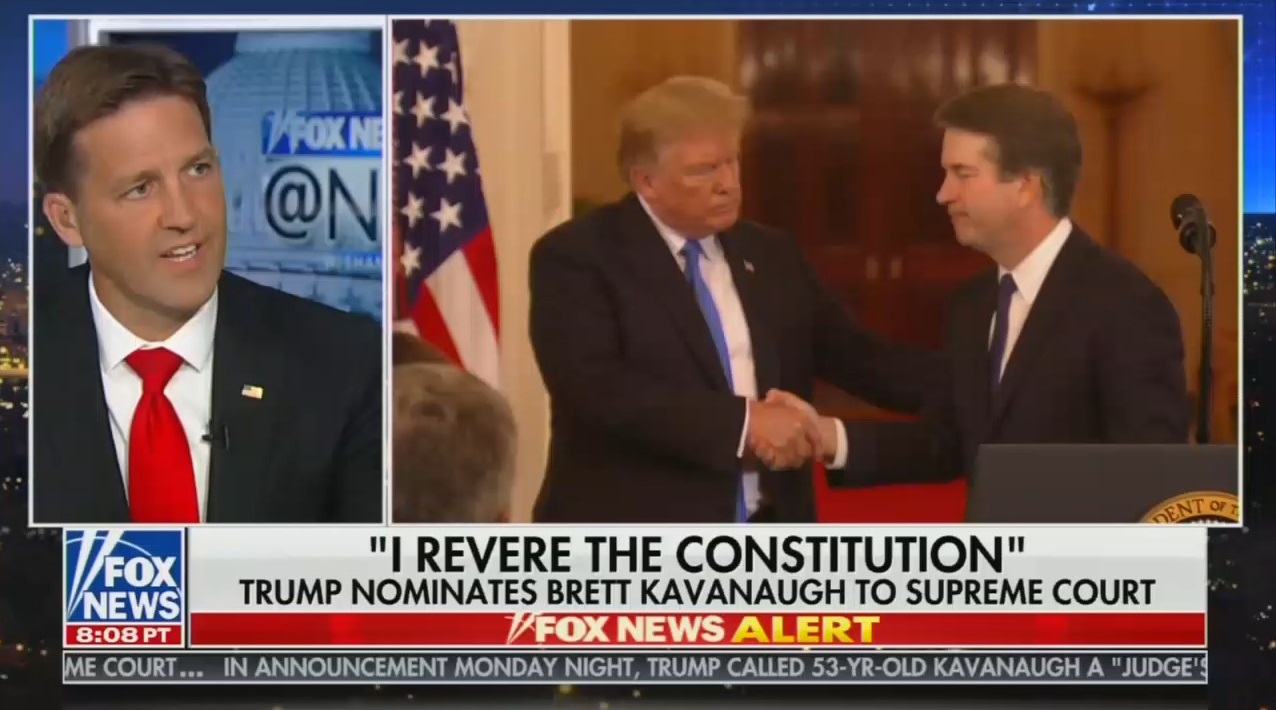 SASSE: — it was a little loud out there. You know, when Gorsuch was picked, I went over to just engage some of the protesters. I was at the White House for the President’s pick and a year ago, the President had me over when selected Gorsuch and we came back and I was headed to my office and I thought I would go outside and see who these protesters are and they had all these Mad Libs signs. They had signs that were made up and

BREAM: And they were left blank, right?

SASSE: — they had Sharpies to fill in the name of who the person was who was supposedly going to end the world. This isn’t the apocalypse. This is a chance to teach our kids basic civics and to celebrate checks and balances. So, I think what happens next is sadly going to be an attempt to Bork a guy. This — 30 years ago — or 31 years ago, in the summer of '87, the seat which Kennedy held for 30 years, was the Bork seat and when Bork wasn't given a fair hearing and when he wasn’t confirmed, he went out and wrote a book the next year called The Tempting of America which is about the politicization of everything. We are not supposed to have judges who think of themselves as super legislators. Protesting on the steps of the Supreme Court tells you that our system is breaking down in terms of basic civics. Protest at the White House. Protest at the Congress because those are places where people are supposed to be responsive to politics. Judges are not supposed to be responsive to politics. I think we’re going to see a big attempt at Borking coming next.

BREAM: I wouldn't be surprised at all and, as you said, last year, there were certainly protesters out there and there was definitely opposition to justice Gorsuch upon his name being announced that night. Tonight, we saw something different. We did have a plan to have our show out their live. It got so volatile at points that we — we ultimately didn't feel like it would be safe to do an hour of live television out there. Where are we?

SASSE: You know, I think it would be great to see people on the left who, even if they want Progressive goals that I don't want from a policy standpoint, admit that the judiciary is not the way to do it. If you want to move policy to the left, as many Democrats want to do, try to persuade the American people. Don't try to do it with people who sit on a court where they don't ever have to face the voters again. In our system, we the people are supposed to have the power and the first branch, Article I, and Article II, they stand for election. Article three judges, they were a black robe. They have lifetime apartments. They are not supposed to be politicians and when you have this much politics around every Supreme Court nomination, it means that we have too much activism in our courts.

BREAM: There’s definitely no kumbaya happening out there on the steps, but there is here tonight.

BREAM [TO TONY PERKINS]: Well, a lot of those folks out there on the steps of the Supreme Court tonight — probably not big fans and don’t see the Constitution the same way. Anyway, for now, you’re happy with these picks, so we will follow it and see what happens. Tony Perkins, thank you for coming in....Alright, those opposed to the choice of Brett Kavanaugh claim it's the end of the world and it’s also the end of Roe v. Wade and gay marriage. Others say that no matter who is on the Supreme Court, those precedents are safe. 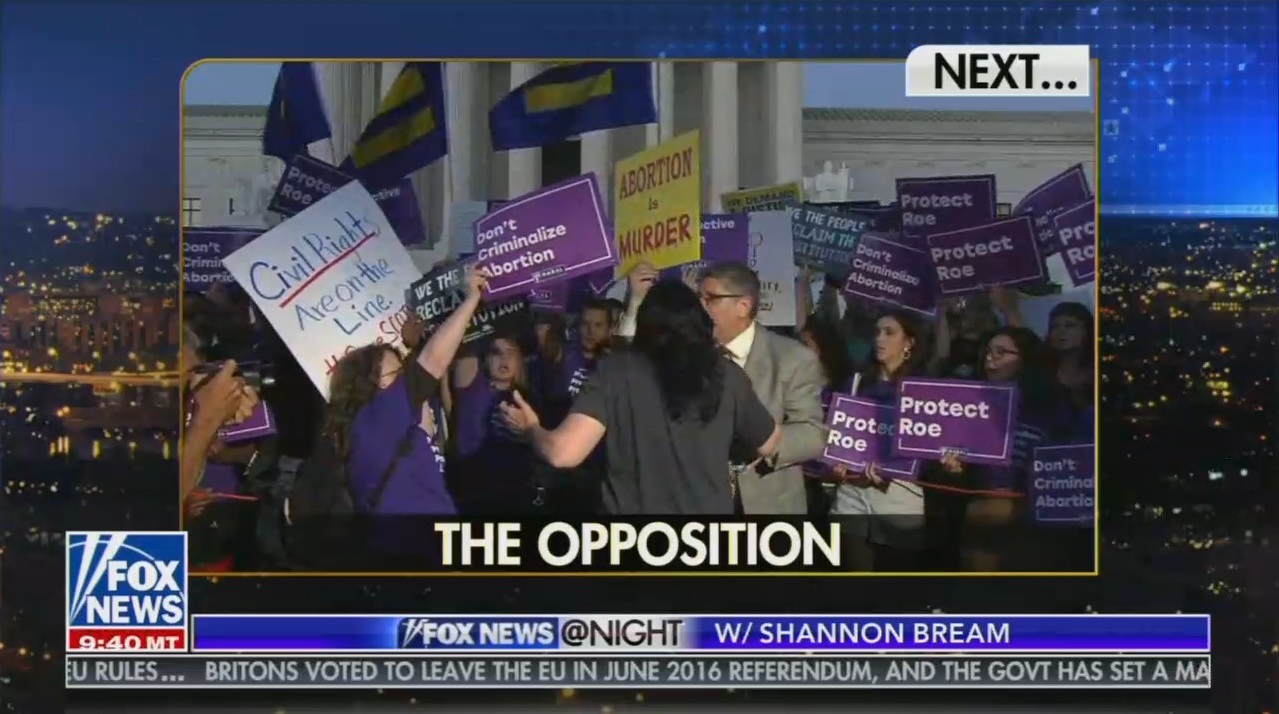 BREAM: Plus, there are not many people — there are many people who are not happy with President Trump's pick. Some of them are still out there protesting at the Court tonight. We are going to take a look at who they are and why they oppose this particular choice.

KRISTIN FISHER: Yeah and you were in the middle of those protests.