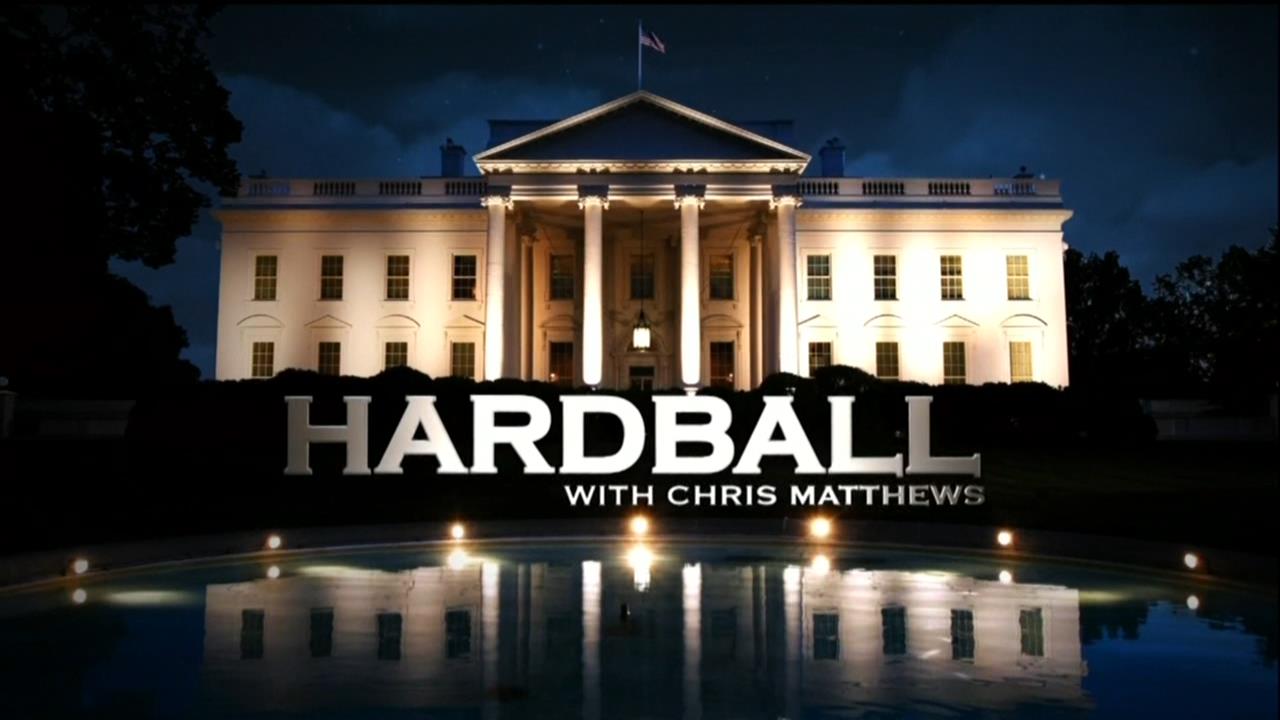 MSNBC’s Hardball featured not one or two particularly crazy moments in Thursday night’s installment by host Chris Matthews, but a whole host of notable exchanges, insinuations, and quotes from both Matthews and a few of his guests. Without any further adieu, here’s the top eight loony moments (presented in chronological order). 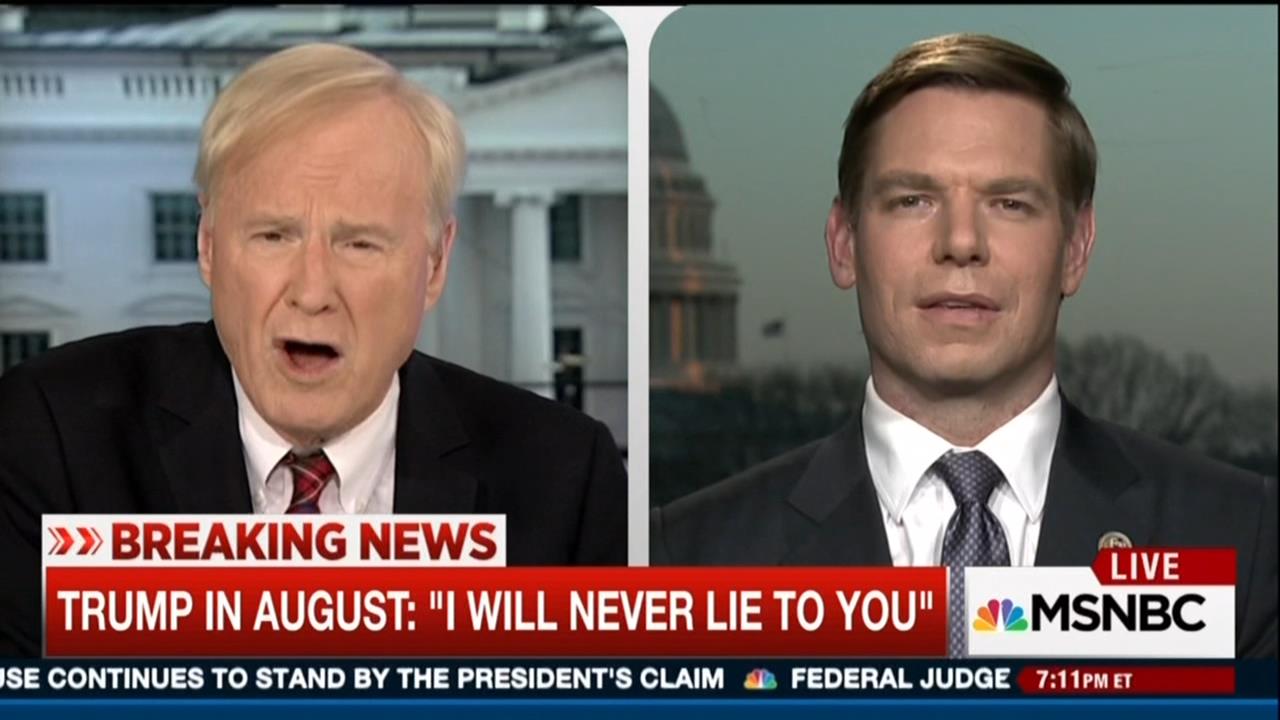 Speaking to Democratic Congresswoman Karen Bass (Calif.), Matthews explained that he came across a “recording of Franklin Roosevelt addressing the country...talking to the American people about their sons going to battle in Normandy, trying to liberate Europe and praying with them about the dangers they face.”

In between this explanation, he ruled that Roosevelt was “a real President” unlike the current one we have: “How is a President that says things that are off the wall. Not just out of right field or left field, but completely off the wall? How does that build that trust?” 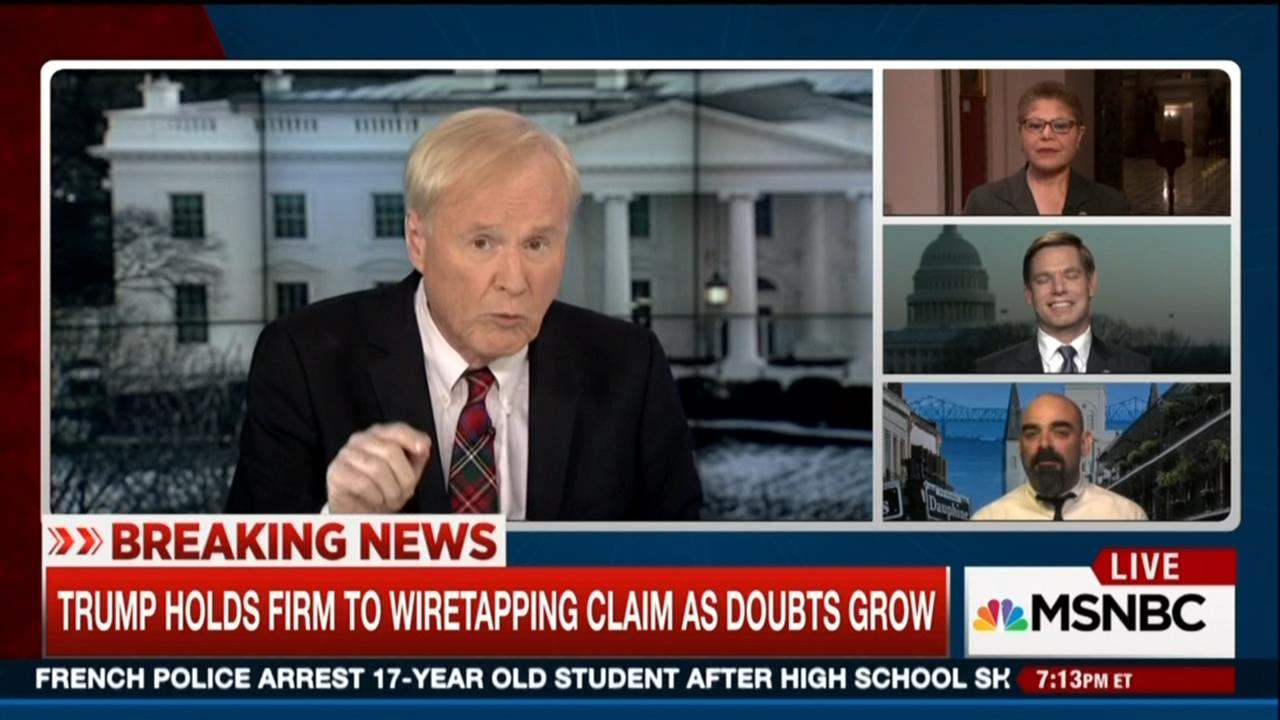 Matthews grew hostile when turning to BuzzFeed’s John Stanton, demanding an answer on whether Trump supporters are blind and gullible enough to believe President Trump if he wakes up and decides that Fridays will now instead be known as Saturday.

Talk about calling the kettle black. Matthews previously did this with movie times and days of the week, but he’s clearly refusing to let this one go as he argued with Stanton at least six times. Here’s the first attempt:

4. 3. Matthews Notices the World Didn’t Say a Word About Russia Until Trump Arrived 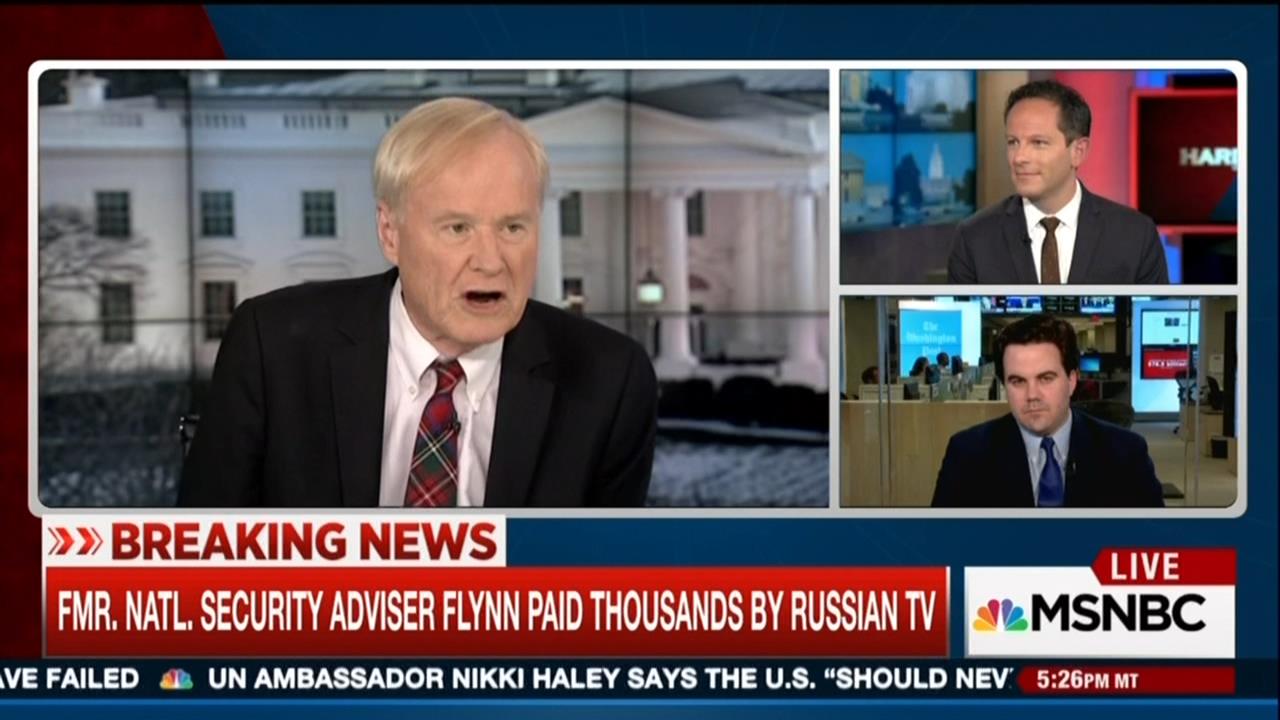 Matthews often stumbles onto something and unintentionally undermines the left and this case was no different. Near the end of a segment, he admitted that “[y]ears passed in this country, you don't hear the word Russian” and especially “[w]hen the Cold War ended.”

Forgetting the fact that Mitt Romney was laughed at for warning about Russia and the media absolving Obama of responsible for Russia’s aggressions in Crimea and eastern Ukraine, Matthews observed that “now, we hear it all the time from one source, Trump. Russia, Russia, Russia, money, money, money, coming from Russia.”

5. 4. False: Matthews Pictures Trump’s America as a Castle ‘Surrounded By This Moat’ 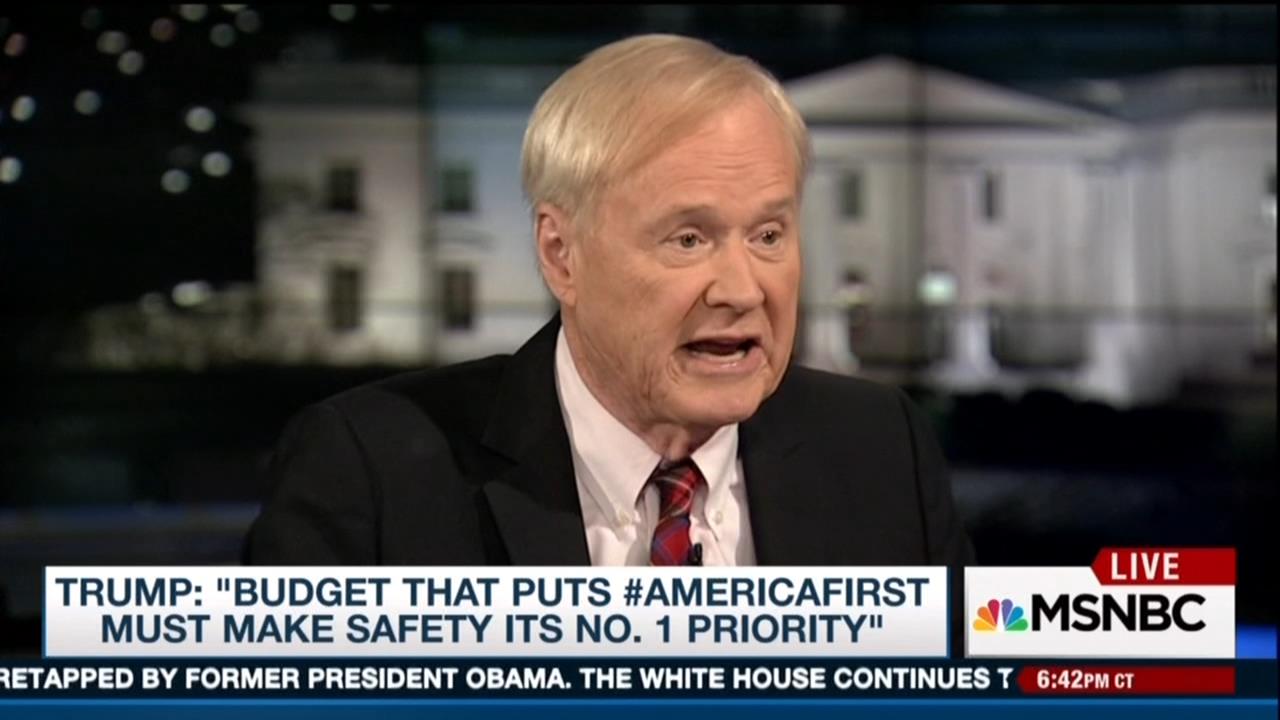 After introducing his Hardball Roundtable, he whined to The Washington Post’s Anne Gearan that, with the spending cuts (to the State Department and the United Nations), the Trump administration wants a “fortress America mentality, which is not going to talk to the rest of the world.”

Matthews ignored the fact that the U.S. is still a part of the U.N., wants to continue NATO, and Trump officials have already embarked on overseas trips when he told Gearan how he’s scared:

Anne, it’s scary when we’re not even going to try to communicate with the world. No more diplomacy, no more trying to — international exchanges, no more students coming here, just us all alone surrounded by this moat of water we think that’s going to protect us. 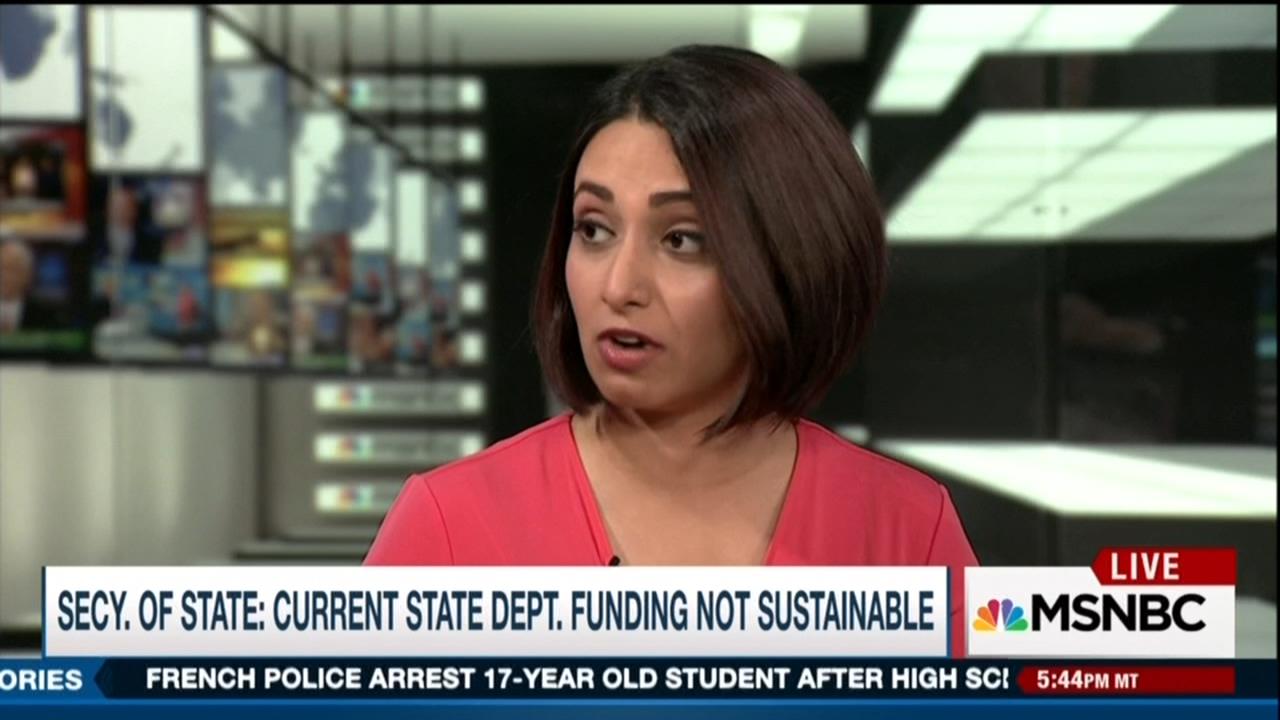 Former Obama State Department official Hayyera Haq told Matthews how displeased she is with the Trump budget proposal, worrying that such cuts to foreign aid will harm ideas like “support for freedom of the press, democracy and the governments” overseas that will allow totalitarian regimes to fill the vacuum instead. 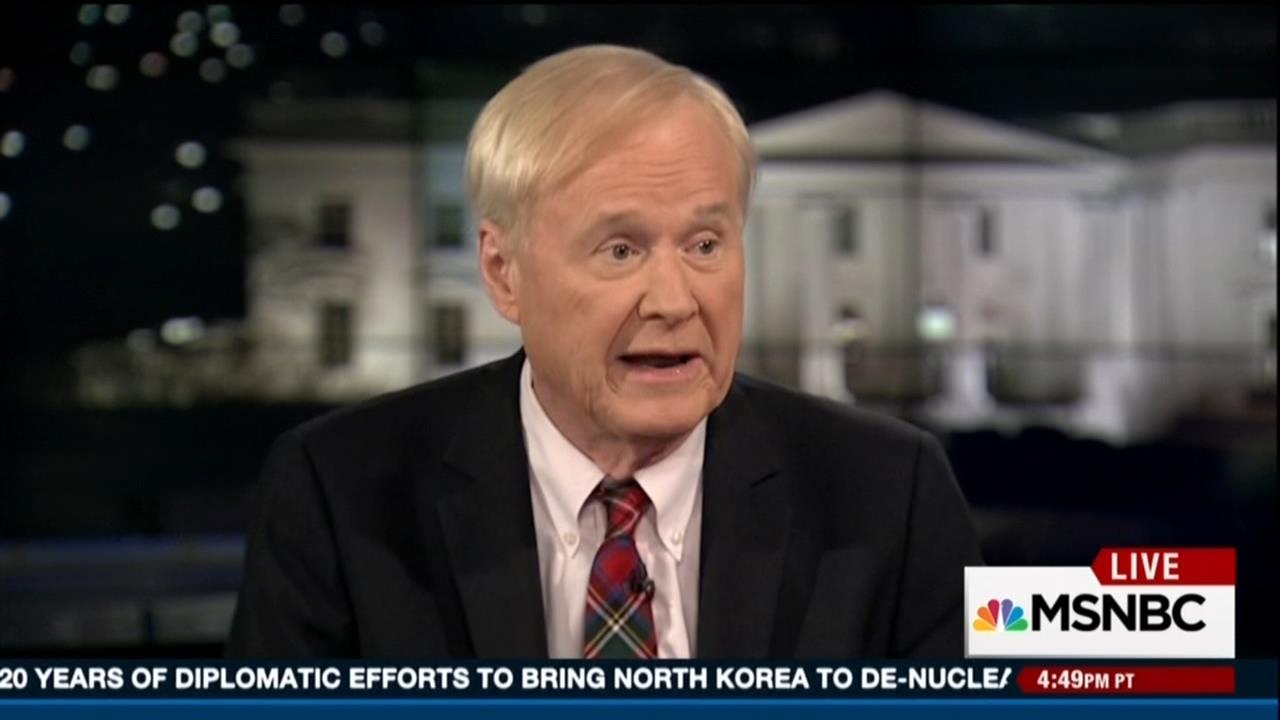 Going to commercial break, Matthews told his roundtable that he’s thankful that Trump wasn’t President when, say, Harry Truman and Dwight D. Eisenhower were when “we rebuilt Europe, rebuilt the whole trading relationships, rebuilt Germany, rebuilt France and we’re able to stand up against communism all those years.”

“That took leadership, that took American thinking, and not doing this twaddle that’s going on right now,” he added. 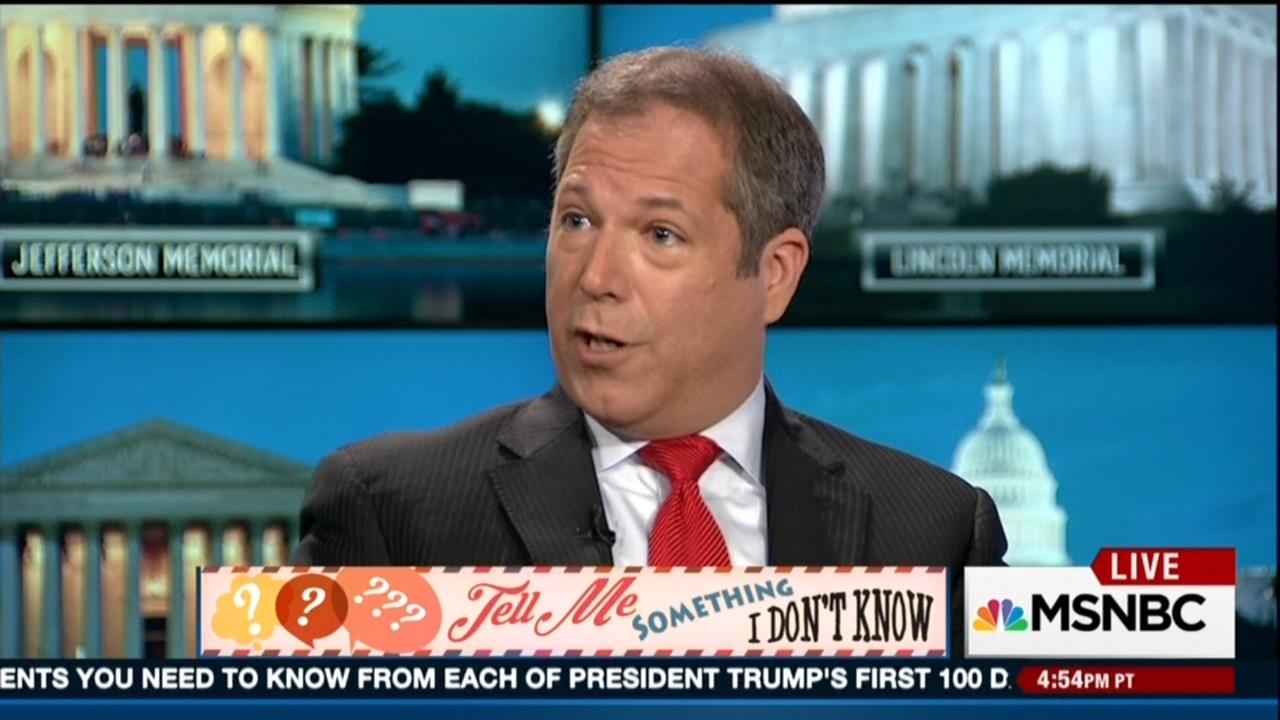 Former Ash Carter adviser Mark Jacobson shared with Matthews that he returned from a trip to Northern Africa and explained how fearful he is that a possible Arabic arm of Russia Today would “challenge al-Jazeera in the Middle East” and he blamed the U.S. for having “cede[d] leadership.”

Russia Today is an abhorrent excuse for a news outlet with its clear intent to push pro-Putin propaganda, undermine U.S. institutions, and attack good journalists like CNN’s Jake Tapper. However, fretting about the future of the liberal al-Jazeera (which is funded by a foreign government as well) isn’t exactly a sound argument to make. 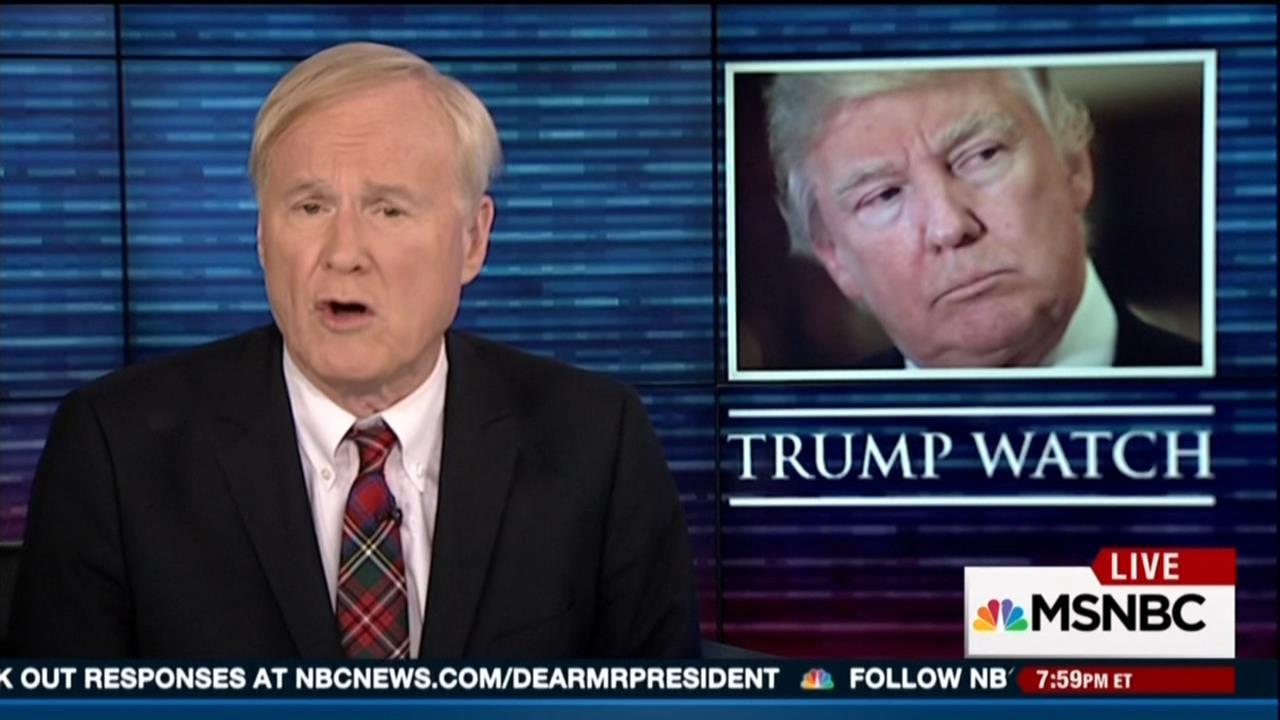 Closing out the show with this “Trump Watch” commentary, Matthews reasserted his lack of respect for the millions who, agree or disagree, voted for the President by hinting they’re so blind in their support of Trump that he could do something as drastic as alter the days of the week without pushback.

“Well, tomorrow is Friday. If the president were to rise at dawn and say “it’s Saturday,” what would be the meaning of that statement? Would his people, those who back him no matter what, check their calendars and convince themselves the calendar they’d been using is wrong and the leader they adore is right,” Matthews began.

Matthews continued on with the nonsense:

Would they say he didn’t mean exactly that it was Saturday but that he was saying that as President of the United States, he was declaring Friday simply the beginning of a long weekend? Would they say something like that if only to get him and therefore his fight-to-the-end-supporters off the hook? Would they? You tell me....The man in the White House is demonstrably capable of making up claims that have no reality. He’s no better than the weirdo in the basement who calls in the fire alarm just to hear the sirens going past.