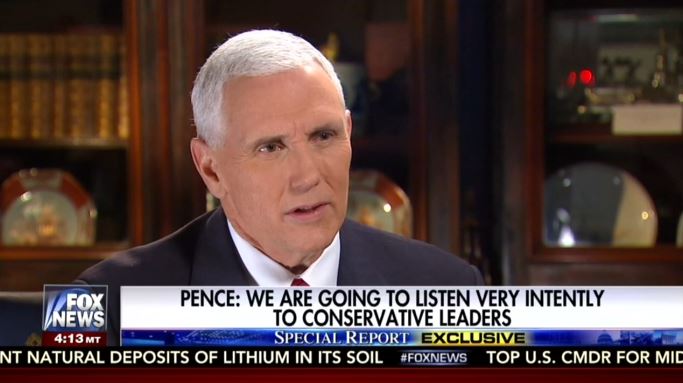 Chalk this up as something that wouldn’t have happened in 2009 under President Obama and Vice President Biden. In an Indianapolis Star column published Friday in USA Today, Matthew Tully wondered what the U.S. would be like if President Trump left “the presidency at some point” under any number of circumstances.

“Will he quit in a historic huff? Will he be pushed out by Congress? Or will he be lured away to host a reality show on Russian TV? I don’t know. For now, the last line of this book seems easier to imagine than all the pages before it,” Tully wondered.

Tully admitted that he “could be wrong,” but nonetheless wildly speculated that “the increasingly paranoid, reckless, authoritarian and generally unstable behavior of our new president makes it hard to see how the country or his own party sustains four years of this.”

From there, Tully spent the rest of the column wondering what it’d be like to have Mike Pence as a president by looking back at what it was like to cover Pence while he was the Governor of Indiana.

Of course, Tully argued a positive thing Pence did “at his best” was an “impressive” deal to essentially expand Medicaid. At the other end, the columnist hyped that the worst of Pence included signing pro-life legislation and “kill[ing] a federal preschool grant application.”

“Whether you reside on the political right or the left, or anywhere in the middle, Pence would be an upgrade. I say this as someone who arguably has written more critical columns about him than anyone, as someone who criticized both his politics and his leadership, and as someone who once wrote that he was “out of his league” as governor,” Tully added.

He then, in part, concluded:

In these early days of the Trump presidency, I keep thinking back to Pence’s years as governor. It has surprised me but within those years, years filled with so much deserved criticism, I find clear evidence that Pence is simply a better person and leader than his boss.

I disagree quite often with Pence’s political views, but I don’t fear that his goal is to bully or otherwise shut down the institutions and traditions that have made America great. He seems to respect these institutions, in fact.

Second, he doesn’t see enemies everywhere. Take the religious freedom controversy. Indeed, he stumbled when questioned and lost control of the debate, and he surrounded himself with an out-of-touch group before signing the bill. But here is what he didn’t do: He didn’t lash out at his critics or his staff. He didn’t label those of us questioning him as enemies or liars. He didn’t offer conspiracy theories. He didn’t descend into deep and dark places for his information. He actually listened to critics.

Third, while many mock Pence’s strict adherence to talking points, and it is indeed frustrating, the trait does make clear that he understands the value of carefully choosing one’s words.

With his conspiracy tweets about Obama, Trump showed that he is in no way suited for the presidency. He showed that he is a reckless and dangerous man, and either dishonest or delusional. He once again made it easy to imagine a scenario in which he at some point loses or leaves his job.