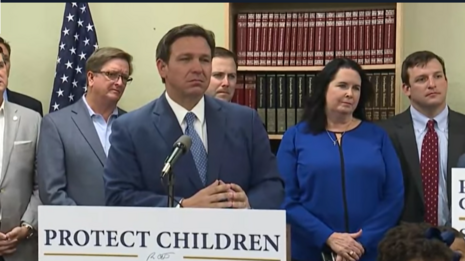 Florida’s onerous “curriculum restrictions” curb teachers from leftist indoctrination, but you wouldn't glean that from the paper's aggrieved tone. Mervosh launched her front-page story with a melodramatic anecdote from a lefty teacher.

Erin Brown, a teacher in St. Johns County, Fla., typically keeps a gay pride flag hanging up in her classroom. As the faculty sponsor of a Gay-Straight Alliance club at her high school, she wants her students to know they are safe with her.

But this year, Ms. Brown found herself quietly repurposing the flag.

No longer on full display, it now hangs as a “rainbow background,” partially obscured among posters, photos, a calendar and other trinkets on her class bulletin board.

The change is emblematic of the fear, uncertainty and confusion many educators in Florida say they are feeling this school year, as new laws take effect restricting teaching on gender identity, sexual orientation and race and expanding the oversight of books.

Gov. Ron DeSantis, who has championed the laws, argues that public schools should focus on teaching core academics, not on pushing a liberal ideology, and that parents have the right to know what is being taught in the classroom.

Didn’t all that sound horrible? It's like having a new conservative editor at the Times making your news stories more impartial. Mervosh's angry teacher called it "treacherous."

….Within the first few weeks of school, teachers in some parts of the state have been asked to take down stickers showing support for L.G.B.T.Q. students, to review every book on their classroom shelves and, in at least one case, to remove rainbow colored paper from a classroom door after the decorations prompted a complaint from a parent, according to interviews with teachers, union officials and advocates for gay rights across Florida.

“It feels treacherous,” Ms. Brown said of the new legislation. She rearranged her pride flag because, like other educators, she said she was erring on the side of caution this year.

Mervosh provided a depressing glimpse of what gender identity movement has wrought. Apparently there are no such things as tomboys anymore, just females trapped in male bodies, a fault presumably to be cured via gender-affirming surgery:

Perhaps most complicating of all, teachers say, are the ways students sometimes bring up race, gender identity and politics on their own -- from musing about whether Scout, the tomboy character in To Kill a Mockingbird, might be trans, to asking about illegal immigration during a lesson on citizenship.

More in that vein emerged in the Saturday edition of the paper’s The Morning newsletter. The teaser to writer German Lopez’s daily report read:

Good morning. Florida’s Republican governor is more conservative than the state’s electorate, but he is embracing a hard-right approach.

Lopez talked to Miami bureau chief Patricia Mazzei, who is hostile to DeSantis but had to admit his loosening of COVID restrictions won him admiration across the political spectrum.

….You can talk to independents, even Democrats, who may not necessarily vote for him, but they remember the lasting impact DeSantis’s policies had on their children, that they could go to school. They are happy they were able to keep their businesses open.