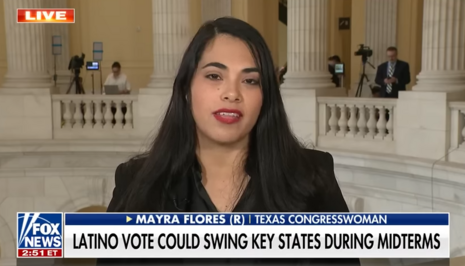 Latina Republican Mayra Flores’ historic win in a Texas congressional district in the Rio Grande Valley was greeted by the Times not with celebration but bitterness and denial. This is the same newspaper that loves to mark such supposed ethnic milestones on the Democratic side, as shown in the nauseating tributes to Sen. Kamala Harris and Biden press secretary Karine Jean-Pierre.

By contrast, Flores, for being guilty of conservative wrong-think, is reduced to a “far-right Latina” by political reporter Jennifer Medina in “The Rise of the Far-Right Latina -- Representative Mayra Flores is one of three Republican Latinas vying to transform South Texas politics by shunning moderates and often embracing the extreme.”

For years, Texas Republicans tried to win the Hispanic vote using a Bush-era brand of compassionate conservatism. The idea was that a moderate’s touch and a softer rhetoric on immigration were key to making inroads with Hispanic voters, particularly in Democratic strongholds along the southern border.

Such was the Texas of old. The Trump age has given rise to a new brand of Texas Republicans, one of whom is already walking the halls of Congress: the far-right Latina.

Representative Mayra Flores became the first Republican to represent the Rio Grande Valley in more than a century after she won a special election last month and flipped the congressional seat from blue to red. She also became the first Latina Republican ever sent by Texas to Congress. Her abbreviated term lasts only through the end of the year, and she is seen as a long shot to win re-election to a full one.

But what is most striking is that Ms. Flores won by shunning moderates, embracing the far right and wearing her support for Donald J. Trump on her sleeve -- more Marjorie Taylor Greene than Kay Bailey Hutchison.

Medina couldn't hide her "can you believe this" tone.

Her campaign slogan -- “God, family, country” -- was meant to appeal to what she calls the “traditional values” of her majority-Hispanic district in the border city of Brownsville. She called for President Biden’s impeachment. She tweeted QAnon hashtags. And she called the Democratic Party the “greatest threat America faces.”

The Democrats don't attack the Republicans as destroyers of democracy? Then there's the Big Lie section:

In an interview in her still-barren office the day after her swearing-in ceremony, Ms. Flores was asked whether she considered Mr. Biden the legitimately elected president.

“He’s the worst president of the United States,” she said.

Was it Medina herself that hassled Flores by repeating the same hostile question three times?

When asked three more times whether Mr. Biden had been legitimately elected, she repeated the same nonanswer.

Medina barely held in her disdain for the area Republicans were gaining new voters.

The Rio Grande Valley has long been a politically liberal yet culturally conservative place. Church pews are packed on Sundays, American flags wave from their poles on front lawns and law enforcement is revered. Ms. Flores’s husband is a Border Patrol agent, a note she often emphasized on the campaign trail.

The Times finds all this distasteful. The reporter found a not-so-objective voice to criticize Flores.

Medina has previously tried to explain away conservative gains among Hispanics by blaming “misinformation” and “conspiracy theories.”