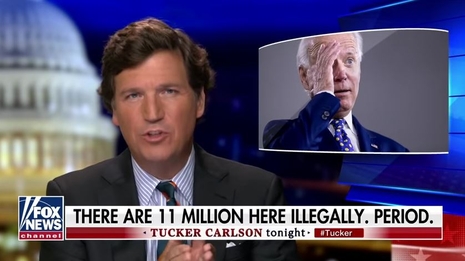 He “had adopted increasingly catastrophic views of immigration and the country’s shifting demographics….Even among the generally right-of-center rank-and-file, discontent was growing over Fox’s nativist tilt and racial scaremongering….”

Each night, Mr. Carlson channels the passions and grievances that have replaced the Reagan-era conservatism he grew up on...He has aggressively defended the insurrectionists who stormed the Capitol on Jan. 6 -- an attack that Mr. Carlson, borrowing the former president’s “deep state” canards, has portrayed as a false-flag operation masterminded by the Federal Bureau of Investigation. Ambitious Republican lawmakers now echo his embrace of the “great replacement” conspiracy theory, once relegated to the far-right fringe, that Western elites are importing immigrants to disempower the native-born.

The Times has previously embraced the anti-Trump “deep state,” while "replacement theory" twists conservatives’ justified concern that Democrats want to import immigrants into America and give them citizenship – Democrats who would then dutifully pull the lever for the big-spending party who fought to get them into the country.

Most strikingly, “Tucker Carlson Tonight” began devoting more and more airtime to immigration and to what its host depicted as the looming catastrophe of demographic change. “He is going to double down on the white nationalism because the minute-by-minutes show that the audience eats it up,” said another former Fox employee, who worked frequently with Mr. Carlson….Fox executives wanted to focus on “the grievance, the stuff that would get people boiled up,” said one current Fox employee. “They’re coming for you, the Blacks are coming for you, the Mexicans are coming for you.”

The Times even managed to twist a threatening radical-left Antifa protest outside Carlson’s home against him.

....Standing in his driveway, yelling through bullhorns, they chanted, “We know where you sleep at night.” Mr. Carlson was not at home, but his wife, Susie Andrews, was. According to the Carlsons, someone banged on the door. Panicked, she locked herself in the pantry and dialed 911.

That was Confessore’s excuse to go into unnecessary, disturbing detail about just where Tucker had moved in Maine. He even had the nerve to write:

….when a local newspaper, The Sun Journal, published news of the proposed purchase, [Carlson] lashed out like a man under siege.

Perhaps because Carlson had been literally “under siege” in D.C.?

The Times wasn’t done. A supposedly terrifying statistical analysis of some of Carlson’s common show themes was put together by a team of nine reporters under the rubric “Inside the Apocalyptic Worldview of ‘Tucker Carlson Tonight.’” But perhaps it’s only scary if you’re a far-left Times reporter or researcher. To normal people, Tucker's catchphrases sound like garden variety populism:

Night after night, the host of the most watched show in prime-time cable news uses a simple narrative to instill fear in his viewers: “They” want to control and then destroy “you.”

They bragged that their “analysis of 1,150 episodes reveals how Tucker Carlson pushes extremist ideas and conspiracy theories into millions of households, five nights a week.” Which begs the question: After that kind of obsessive scrutiny, is this series really the worst they could find from Fox's horribly “racist” host?