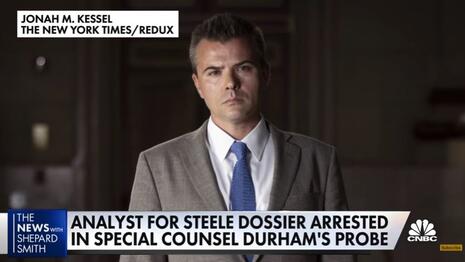 The infamous tissue of rumors and lies that would foster the false “collusion”-with-Russia narrative (a word the Times once tossed over Trump-related stories like salt) was put together by British spy Christopher Steele as opposition research funded by the Democratic National Committee on behalf of candidate Hillary Clinton. The conspiratorial stew dishonestly used by the FBI to persuade a court to authorize a wiretap of Trump campaign staffer Carter Page.

Yet the document was treated seriously as an excuse to launch investigations into Trump and his associates, under the rubric of “Russiagate.”

Savage is defensive, perhaps because his paper swallowed the conspiracy whole. In 2017 the paper noted “the respectable credentials of the British spy, Christopher Steele,” and even gave the FUSION GPS authors of the dubious dossier a do-over via op-ed in November 2019 under the headline “Don’t Let Trump Rewrite History.”

Former President Donald J. Trump and his allies have stepped up an effort to conflate the so-called Steele dossier with the Russia investigation following the indictment of a researcher for the document on charges that he lied to the F.B.I. about some of its sources.

Mr. Trump and his supporters have long sought to use the flaws of the dossier to discredit the investigation into Russian interference in the 2016 presidential election -- and the nature of numerous links between Russia and the Trump campaign -- as a “hoax.”

But the available evidence indicates that the dossier was largely tangential to the Russia investigation. Here is a look at the facts.

Many things that were not immediately apparent about the dossier have since become clearer. It grew out of a political opposition research effort to dig up information about Mr. Trump funded by Hillary Clinton’s campaign and the Democratic Party….

“Not immediately apparent” because the Times and the rest of the anti-Trump press had no incentive to look closer?

Savage did his best to downplay the phony dossier’s significance.

....when counterintelligence agents launched the effort on July 30, 2016, they did not yet know about the dossier….

The basis for the investigation was instead that WikiLeaks had disrupted the Democratic National Convention by releasing Democratic emails believed to have been stolen by Russian hackers, and that an Australian diplomat said a Trump campaign foreign policy adviser had bragged to him about apparent outreach from Russia involving an offer to help the campaign by anonymously releasing information damaging to Mrs. Clinton.

He had to admit the FBI took investigative steps based on the dossier, including lies by the FBI to wiretap Trump campaign adviser Carter Page, which he euphemistically termed “numerous flaws in those wiretap applications.”

While the dossier-tainted wiretap of Mr. Page has received significant attention, it was a small part of the overall investigation….

Still, the dossier did not create this atmosphere of suspicion. Mr. Trump’s relationship with Russia had been a topic of significant discussion dating back to the campaign….

Savage then listed vague circumstantial suspicions of Trump, as if they somehow justified the years-long investigation.

Among the reasons: Mr. Trump had said flattering things about Russian President Vladimir V. Putin, kept bringing on advisers with ties to Russia, had financial ties to Russia, publicly encouraged Russia to hack Mrs. Clinton, and at his nominating convention, the party dropped a plank that called for arming Ukraine against Russian-backed rebels….