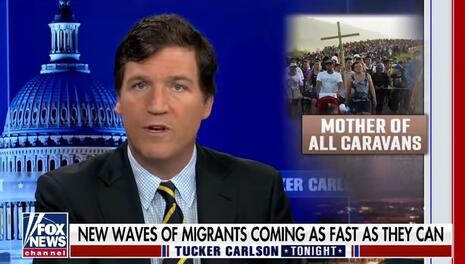 The headline was “Charlottesville’s Extremist Theories Echo in the Mainstream Right.”

The jury verdict on Tuesday holding a dozen white supremacists liable for the violence at the 2017 “Unite the Right” rally in Charlottesville, Va., was a victory for those who have long inveighed against far-right extremists and a rare example of hate group leaders being held responsible not only for the language….

But even though the planners of the rally lost their civil trial and now confront the prospect of $25 million in damages, their legacy lives on.

Four years after the event, the same ideas that made “Unite the Right” a lightning rod for hate groups are increasingly being echoed, albeit in modulated tones, by prominent figures in conservative media and politics. Chief among them is the great replacement theory, which holds that Democrats and others on the left are trying to supplant white Americans with immigrants and others for their own political gain.

That’s a hostile way to describe what for most conservatives is the justified concern that Democrats want to import immigrants into America who would then dutifully pull the lever for the party who fought to get them into the country.

….their once-fringe belief that white people are under attack in America has now moved closer to the conservative mainstream.

In the spring, a Pennsylvania Republican, Representative Scott Perry, made reference to replacement theory at an immigration hearing on the floor of the House. In September, Elise Stefanik of New York, the House Republican conference chair, released a campaign ad based on a version of the theory….

According to the Washington Post article he linked to, Stefanik’s campaign ad said Democrats “plan to grant amnesty to 11 MILLION illegal immigrants” which will “overthrow our current electorate and create a permanent liberal majority in Washington.” In other words, fierce conservative rhetoric, not conspiratorial white supremacism. Surely Democrats are counting on these new voters?

Feuer made the leap from “replacement theory” to…criticizing Colin Kaepernick?

….During his years in office, Mr. Trump repeatedly stoked white grievances by focusing on issues like his border wall or on N.F.L. players who knelt during the national anthem, encouraging the notion that white people in America were under attack, Mr. Greenblatt said.

Feuer cited the domestic terror attacks on a Pittsburgh synagogue in 2018, and an attack in El Paso in 2019. Then he lumped in terror attacks with a supposed spike in threats against school board officials.

Indeed, in recent months, as Republican officials have pursued an agenda of combating what they have described as critical race theory in schools, there has been a disturbing spike in threats against school board officials. Ordinary people have also been involved in sending hundreds of intimidating messages to election officials in at least a dozen states.

This after an actual domestic terrorism incident in Wisconsin by a BLM supporter and career criminal that has left six dead.

Feuer segued to the January 6 attack on the Capitol (one marvels at his self-control, waiting until paragraph 19).

What makes Feuer’s unfair attack on mainstream conservatism particularly galling is that he actually promoted dangerous left-wing extremism back in June 2006, reporting from a convention where people were convinced the Bush administration either knew or was actually instigated the 9-11 attacks that killed over 3,000 Americans. The text box said of the conference: "Some participants see an American tradition of questioning concentrated power."