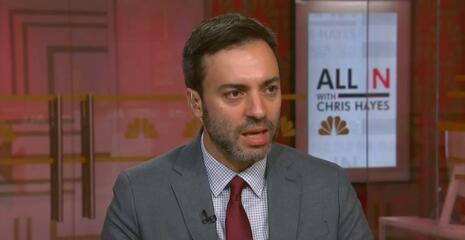 Following up on his 10,000-word expose last month during the trial of Kyle Rittenhouse over shootings in Kenosha, Wisconsin during a race riot, New York Times reporter Charles Homans on Monday delivered another 1,600 words of paranoia fretting over “mostly white armed paramilitaries” in the aftermath of Rittenhouse’s acquittal, “In Rittenhouse Verdict, Paramilitary Groups See Vindication.”

The subhead? "His acquittal has reinvigorated support on the right for armed responses to racial justice protests and unrest." This is the problem: that somehow a white teen's self-defense is horrendous, but you can combine the phrases "racial justice" and "unrest" without seeing any intellectual incoherence.

On Friday, as Kyle Rittenhouse stood in a courtroom in Kenosha, Wis., awaiting the verdict in his trial, a large bald man with mutton chop sideburns sat in a pew several rows behind him. As a court clerk announced Mr. Rittenhouse’s acquittal on all charges, a faint smile passed across the man’s lips.

That man would be Kevin Mathewson, “a prominent and divisive figure in Kenosha” who created the armed group Kenosha Guard “to deter rioting/looting” amid demonstrations in Kenosha after the police killing of Jacob Blake. Just as he did in October, Homans tried to discredit Rittenhouse by linking him to far-right “paramilitaries,” even though he found no connection between Rittenhouse and the Kenosha Guard founder with which he leads his story.

...no evidence ever connected Mr. Rittenhouse -- whom Mr. Mathewson said he had never met -- to his Facebook post. But his proximity to the incident led to him being banned from Facebook, where his Aug. 25 post had been flagged repeatedly for violating the platform’s ban on militia activity and had left an aura of suspicion around him.

Now that Mr. Rittenhouse had been acquitted, Mr. Mathewson felt cleared by association….

The paper's liberal priorities show through again with far more concern over armed men defending property than the Black Lives Matter-affiliated rioters destroying it. This is all about race:

White vigilante groups, some of them openly white supremacist, responded violently to unrest in Black communities in multiple cities in the late 1960s, often with the acquiescence or active support of local police. Photographs of armed Korean American business owners in Los Angeles defending their properties during the 1992 riots have been touchstones for Second Amendment advocates for years, and they were circulated again as social media memes after the Rittenhouse verdict.

No mention is made that one of the Rittenhouse’s attackers, Gaige Grosskreutz, drew his own gun on Rittenhouse. Where’s the condemnation of armed Antifa vigilantism? Being armed is fine....when you're on the "right side of history."

Homans ended with a local black racial activist bitterly claiming racism had stopped him from open carrying a firearm the way Rittenhouse did, as if the teenager who went on trial somehow got away with something and racial fairness would have required locking him up, or worse:

To [Raymond] Roberts, the Rittenhouse verdict was a stark reminder of who was likely to be seen by the police and jury members as “helping” in a situation like the one Mr. Rittenhouse placed himself in, and who was not. “I have to be honest and say I’m angry because I’m jealous,” he said.

“That 17-year-old white boy, this country belongs to him more than it’ll ever belong to me. It doesn’t matter how many years I did in the Army, how much taxes I pay. I can’t do what he did. I can’t walk around in the middle of the night open carrying,” Mr. Roberts said.