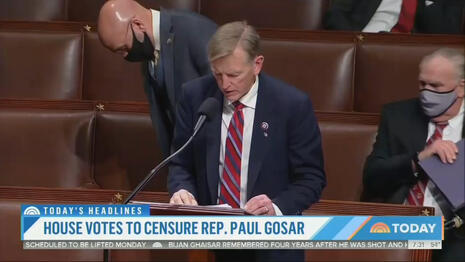 Never mind months of violent left-wing street riots nationwide, multiple assaults on Sen. Rand Paul, an attempted assassination of Republican congressmen at a ballfield. The New York Times is wringing its hands over an animated video issued by a far-right Republican congressman, smearing the entire party as coursing with violence in Wednesday’s story by Catie Edmondson, “Democrats Press for House Censure of Gosar for Violent Anime Video.”

House Democrats plan to move on Wednesday to formally rebuke Representative Paul Gosar, Republican of Arizona, and strip him of committee assignments for posting an animated video depicting him killing a Democratic congresswoman and attacking President Biden.

(The House of Representatives voted Wednesday afternoon to censure Gosar.)

House Republican leaders have not publicly condemned Mr. Gosar for the video, which surfaced as prominent members of the party have become increasingly tolerant of violent statements, and their core supporters have resorted to threats against lawmakers considered insufficiently loyal to the G.O.P. line.

Do Times reporters really not remember the assaults on Republican Sen. Rand Paul, or the Bernie Sanders’ supporter who shot up a ballfield of Republican congressmen in 2017? The obnoxious protests outside the homes of Senate Majority Leader Mitch McConnell and Sen. Lindsay Graham? The Federalist also ran a useful compendium of Democrat threats against Republicans: “14 Times Republican Officials Viciously Harassed, Threatened With Death.”

For Democrats, the animated video was the final straw.

Even worse in its hysteria and bias by omission was a front-page story on Saturday by Lisa Lerer and Astead Herndon, “Menace Enters the Republican Mainstream.”

From congressional offices to community meeting rooms, threats of violence are becoming commonplace among a significant segment of the Republican Party. Ten months after rioters attacked the United States Capitol on Jan. 6, and after four years of a president who often spoke in violent terms about his adversaries, right-wing Republicans are talking more openly and frequently about the use of force as justifiable in opposition to those who dislodged him from power.

Most galling, they let the Democrats off the hook for their own violence, linking to a story on the 2017 shooting by a Bernie Sanders supporter of Republican Rep. Steve Scalise and other Republican congressmen on a ballfield, but without mentioning it in the story itself -- while praising Democrats for condemning such violence! (Links included below for context.)

Political violence has been part of the American story since the founding of the country, often entwined with racial politics and erupting in periods of great change: More than 70 brawls, duels and other violent incidents embroiled members of Congress from 1830 to 1860 alone. And elements of the left have contributed to the confrontational tenor of the country’s current politics, though Democratic leaders routinely condemn violence and violent imagery.

But historians and those who study democracy say what has changed has been the embrace of violent speech by a sizable portion of one party, including some of its loudest voices inside government and most influential voices outside.

In effect, they warn, the Republican Party is mainstreaming menace as a political tool.

The story even descended into dredging up domestic rumors, as if Republicans have some monopoly on those scandals, and as if they have anything to do with political rhetoric.

There is little indication that the party has paid a political price for its increasingly violent tone.

Lerer and Herndon evaded party identification while relaying this statistic:

And threats against members of Congress have jumped by 107 percent compared with the same period in 2020, according to the Capitol Police. Lawmakers have been harassed at airports, targeted at their homes and had family members threatened….

Democrat Sen. Kyrsten Sinema of Arizona has been harassed on a plane and in airports multiple times by liberal activists, as has Senate Majority Leader Mitch McConnell, but somehow those examples are not relevant.