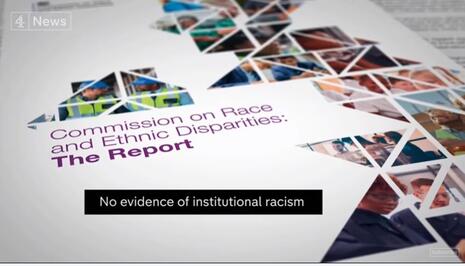 In the United Kingdom, Boris Johnson’s government commissioned a report on race. Released in March, it offered an optimistic view, saying institutional racism for minorities no longer blocked minority achievement in the UK.

But left-wing pressure groups and their journalistic allies were appalled to read that the country they lived in was not hopelessly bigoted. Now the United Nations’ own batch of “experts” have condemned the findings, and the New York Times predictably pounced.

Nick Cumming-Bruce, who reports on the United Nations for the Times, crowed that “U.N. Rights Experts Reject Britain’s Report on Racism.” The text box is a quote from the report, which suggests official Times’ approval of its sentiment: “‘A tone-deaf attempt at rejecting the lived realities of people.’”

It’s the paper’s second attack on the report. That suggests its existence threatens the psychological need of Times staffers to believe in the recurrent sway of white supremacy and systemic racism in America and abroad -- or at least under allied conservative governments like that of the much-loathed Boris Johnson in the United Kingdom.

The British race report was “a tone-deaf attempt at rejecting the lived realities of people of African descent and other ethnic minorities” in Britain, the U.N. Working Group of Experts on People of African Descent said.

The Times also called it “an embarrassing blow for Mr. Johnson’s approach to race from the United Nations human rights machinery….”

Speaking of “embarrassing,” when exactly did the operationally anti-Semitic, China-coddling United Nations gain the moral authority to issue a supposedly “devastating critique” of a UK report on racism?

British cities echoed last year with the cries of Black Lives Matter protesters, demanding a racial reckoning in Britain similar to that convulsing the United States in the wake of multiple killings of Black Americans by the police.

On Wednesday, Prime Minister Boris Johnson responded by releasing a government-commissioned report on the state of racial discrimination in Britain that concluded that the country “should be regarded as a model for other white-majority countries.” The backlash was swift and scathing.

Critics accused the Conservative government of whitewashing racial injustice by arguing that discrimination is more a result of socio-economic disparities than skin color. By discouraging use of the term institutional racism, they said, the report sought to turn back the clock on how Britons talk about race.

These two supposedly experienced Times reporters treated a common liberal practice (pressure groups giving sympathetic reporters an early look at a report) as sinister when the Conservative Party does it.

Even before its release, critics complained that the report’s conclusions were handed to selected journalists before publication as part of a media strategy shaped more by politics than a desire to expand the discourse over race.