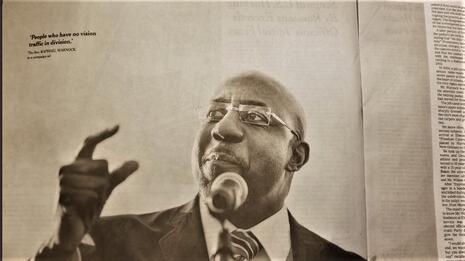 Radical Rev. Raphael Warnock is running against a Senator the New York Times calls “strident Trump loyalist” Sen. Kelly Loeffler in one of two U.S. Senate runoffs that end Tuesday in Georgia. The Times has been feverishly promoting both Democratic runoff candidates (the other is Jon Ossoff), especially Warnock, while lobbing accusations at the Republicans.

The pro-Democratic propaganda culminated with the paper blessing Rev. Warnock’s campaign with an enormous 5,000-word profile on Sunday's front page by reporters Shaila Dewan and Mike Baker, “In Georgia Race, Raising ‘Uncomfortable’ Truths.” The profilers found excuses for his radical outbursts while promoting his resume.

The duo began with how Warnock tried to shame the state's black attorney general, Thurbert Baker, on a prison-release case in a sermon as he sat before him in his church: “He has said that it’s his job to be the state’s attorney, and that’s true,” Mr. Warnock said. “But it’s my job to be the state’s conscience.” It continued:

….The race has attracted record sums. Mr. Warnock has raised more than $100 million to help make the case that his life trajectory has better prepared him for this moment than anyone else.

This moment, he frequently reminds his audiences on the campaign trail, includes a pandemic with glaring racial disparities, global calls for justice spurred by police killings of Black people, and the stunning fact that Georgia voters, who have never elected a Black senator, just gave the nod to a Democratic presidential nominee for the first time since 1992.

Mr. Warnock is betting that the time is ripe for a Black Baptist preacher in robes trimmed with kente cloth, who speaks of police brutality and voter suppression from one of the world’s most famous pulpits. While he has built a résumé that piles credential on top of credential, he has not hesitated to share personal experiences like being suspected of shoplifting and having an incarcerated brother.

Republicans have tried to paint him as a dangerous radical, noting his denunciation of white privilege, his defense of Black pastors who have criticized the United States and his support of abortion rights. Incidents from his past have come under greater scrutiny, including an arrest for which the charges were later dropped and an incident last year where his now ex-wife called the police after a conflict outside her home.

This paragraph could have come out of a Warnock campaign flier:

In the pulpit, Mr. Warnock has positioned himself as a moral compass for government. Now he wants to continue that job -- in Washington.

After a brief summary of the controversy over Warnock defending Obama preacher Rev. Jeremiah (“God damn America!”) Wright, reporters Dewan and Baker pivoted back to defending the Democrat.

In a state where three-quarters of the population identifies as Christian, and many white evangelicals embrace conservative political views, Republicans and Ms. Loeffler’s campaign have used his messages and sermons to try and paint him as a “radical” -- and their claims have often been labeled by fact checkers as misleading.

The Times quotes from a Warnock campaign ad, a quote also used to caption a huge photo of Warnock inside the paper: "People who have no vision traffic in division." This, from the Jeremiah Wright supporter!

Later in the lengthy story, the reporters recited the bare bones of some of Warnock’s personal controversies. But it ended by reciting Warnock’s call-and-response schtick at a get-out-the-vote rally,  an odd ending to a supposedly objective news story. 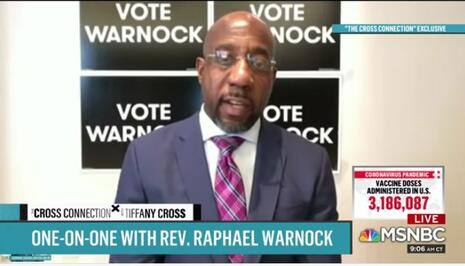 Mr. Warnock finessed [the crowd] with the confidence of a man who gave his first sermon at 11. Back then, he said it was time he was about his Father’s business. Four decades later, for him that has come to mean politics.

“We the people!” the crowd shouted back.

Mr. Warnock went on to define “we the people” in this moment: workers who don’t have health care, people who don’t make a living wage, seniors who struggle to pay for prescription drugs.

“Get up,” he called, his speech building to a get-out-the-vote crescendo.

The crowd repeated, “Get up!”

Then he said, “Put your shoes on.”

And vote for Warnock! That’s now how the story actually ended, but might as well have been.