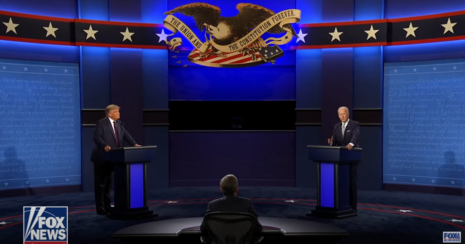 Before the chaotic presidential debate between Donald Trump and Joe Biden began, Tuesday’s New York Times’ “political memo” by Sarah Lyall seeded the ground with “Debating How to Debate Trump, the Unpredictable Aggressor,” bringing in psychiatrists and others to advise Biden on how to deal with Trump during the debate (and how Hillary Clinton should have dealt with him in 2016).

Perhaps to cover herself, Lyall actually brought up the “Goldwater Rule,” named after 1964 Republican presidential candidate Barry Goldwater, a custom whereby mental health professionals should refrain from diagnosing public figures. Then Lyall proceeded to help some members of that profession break that rule, to smear the current Republican candidate for president.

She began by quoting Hillary Clinton’s memoir about how “incredibly uncomfortable” Donald Trump made her on the debate stage in 2016. As Lyall melodramatically summarized, Hillary “could feel him breathing down her neck.” She set the scene:

The stakes are high. The mood is feral. And the question for Mr. Biden is: What is the best way to confront an opponent who does not play by the rules?

The question is as much psychological as political. Although American mental health professionals tend to follow the Goldwater Rule, which holds that they should not offer formal opinions about public figures they have not examined, a number of psychologists have broken with that tradition in the Trump era, saying their duty to warn the public supersedes their professional reserve.

In the 2017 book “The Dangerous Case of Donald Trump,” 27 mental health experts argued that the president’s mental instability made him unfit for the job and a threat to the country. He exhibits signs of narcissism, sociopathy and extreme present hedonism, they wrote; he is grandiose, unable to accept criticism, vain, impulsive, lacking in empathy and desperate for affirmation.

How should Joseph R. Biden Jr. debate such a president? Saying they were alarmed at Mr. Trump’s behavior, a number of mental health professionals offered a variety of suggestions for how to respond.

Martha Beck, an author and sociologist, said that Mr. Trump was like “a tantrummy child” in a supermarket.

Lyall rounded up some familiar Trump opponents, like Jay Carney, former press secretary for President Barack Obama and spokesman for Vice President Biden, and Trump’s niece Mary Trump. She circled back to Hillary in conclusion:

'.…as Mrs. Clinton wrote: “Do you stay calm, keep smiling and carry on as if he weren’t repeatedly invading your space? Or do you turn, look him in the eye and say loudly and clearly, ‘Back up, you creep. Get away from me.’”

While the Times takes everything Trump says literally and judges him accordingly, Biden can call Trump "Putin’s puppy,” which is metaphorically dubious and factually false (Trump is no breed of Canis) and garner the "True" seal of approval as reporter Michael Crowley did with this Biden quote:

“The fact is that I’ve gone head-to-head with Putin and made it clear to him, we’re not going to take any of his stuff. He’s Putin’s puppy. He still refuses to even say anything to Putin about the bounty on the heads of American soldiers.”

After Biden affirmed a study’s prediction that up to 100,000 lives would be saved between now and January if everyone used masks, the paper eagerly marked it as “True,” which seems a category error for what boils down to an informed guess. For some reason, that particular “fact check” seems to have vanished from nytimes.com (it previously resided here)

Trump’s criticism of the left-wing domestic terrorists of Antifa -- “Somebody has to do something about antifa and the left. This is not a right-wing problem. This is left wing”-- was dubiously declared “Misleading” by reporter Zolan Kanno-Youngs:

Some members of antifa, a loose movement of “anti-fascists,” have committed acts of violence….But Mr. Trump’s own top national security officials have said the movement has not represented the most lethal threat to the United States in recent years.