David Marchese’s “Talk” interview for an upcoming issue of the New York Times Magazine promoted Rep. Ilhan Omar, Democrat of Minnesota. Omar, a controversial left-wing congresswoman and outspoken member of “The Squad,” has made multiple anti-Semitic remarks, most of which have been downplayed or excused by the paper. Smugness radiated from the headline: “Ilhan Omar Is Not Here to Put You at Ease.” 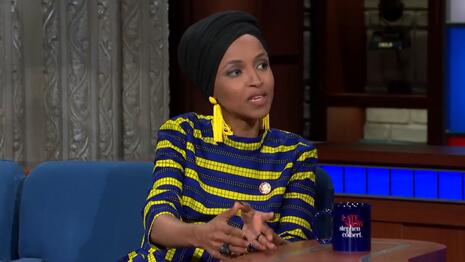 Few members of Congress have been as much of a political lightning rod during the storm-heavy Trump era as Ilhan Omar. The spotlight has at times been useful, as the 37-year-old Democratic congresswoman from Minnesota has become a prominent voice on issues like racial justice and police reform. But it has also resulted in disturbingly violent rhetoric from her opponents on the right. “I have-- in one body -- six or seven marginalized identities,” said Omar, who this year published an autobiography, This Is What America Looks Like, “and there’s an expectation from everyone on how those particular identities should behave.”

*There’s a section of your book where -- well, I’ll quote it directly: “I am, by nature, a starter of fires. My work has been to figure out where I’m going to burn down everything around me by adding the fuel of my religion, skin color, gender or even tone.” Couldn’t that kind of language be interpreted as a form of demagoguery? Why is it helpful to express yourself in those terms rather than, say, in terms of building things up?

Omar went on a rant about how "There’s no one else that exists in a space where they have to deal with the hate of anti-Muslim, anti-immigrant, anti-Blackness, but also with sexism. People will say it’s my “tone.” I’m like, you’re agitated by my tone because you think people like me should be sitting in a corner, not heard and not seen. Everything that comes out of my mouth is going to be filtered through the lens of you despising my existence."

*Do you believe there’s a connection between what you’re describing -- the way you’re interpreted -- and the accusations of anti-Semitism that you’ve received?

A footnote to that above statement contained this lame excuse: “Omar has drawn criticism for comments and tweets about Israel’s influence on American foreign policy that have been interpreted as anti-Semitic and for which she has since apologized.”

Rep. Omar has accused Jews of buying influence ("It's all about the Benjamins") and American Jews of dual loyalty. In 2012 she tweeted “Israel has hypnotized the world, may Allah awaken the people and help them see the evil doings of Israel.”

With a few awkwardly worded, semi-critical questions out of the way, Marchese devoted the rest of the text to aligning with Rep. Omar against the GOP.

*A Republican House candidate posted an image on a Facebook page that showed her holding a gun next to pictures of you and Alexandria Ocasio-Cortez and Rashida Tlaib. How do you even begin to think about something like that? This is not a random person who did that. This is someone who is likely to win a seat with you in Congress.

*Have any of your Republican colleagues ever reached out, publicly or privately, and said the use of violent imagery or language toward you is not OK?

*Really? No Republican member of the House or Senate has ever offered any words of support?

*Someone could think whatever they want about your politics, but the whole idea of politicians even invoking violence against other politicians -- and it being remotely acceptable -- is just so discouraging. Are you at all hopeful that these extreme levels of tension will diminish at some point?

*What do you make of the way that part of the larger political conversation has been shifting toward one centered on “law and order” and away from racial injustice and racial equality?

Note the scare quotes around “law and order,” a common Times tactic.

Marchese’s “Talk” with a black Republican congressman played out quite differently. In January 2020 he interviewed Rep. Will Hurd of Texas, a moderate Republican whose criticism of Trump didn’t save him from ideologically loaded questioning from Marchese. He introduced Rep. Hurd as “the only black Republican in the House” and pondered if he “could help forge a more inclusive future for Republicans,” who clearly need the help:

*Texas is an increasingly purple state, in part because of the state’s rising Hispanic population. Is there any concern on your part that your approach -- the success you’ve had in connecting with that demographic -- is undermined by broader divisive Republican rhetoric?

*I’m not sure I fully understood the distinction you just made between showing people that the Republican Party cares and its policy. Isn’t it possible that Republican branding is not that great among the demographics you identified because the party pursues policies that alienate those voters?