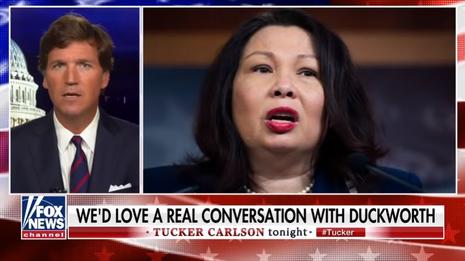 Reid fumed under the headline: “After Fox Host Questions Her Patriotism, Senator Who Lost Legs to War Hits Back.” The text box: “Beyond her sacrifices in Iraq as proof, a D.A.R. membership.”

Hmm. Given the left’s -- and the Times -- clear disdain for founding patriots like George Washington and Thomas Jefferson, why would they assume “questioning patriotism” is a bad thing? What liberal Democrat would want to be accused of patriotism these days?

Senator Tammy Duckworth of Illinois, a Thai-American Democrat who lost both of her legs fighting in the Iraq war and is now a potential vice-presidential nominee, was targeted with nativist smears for the second night in a row on Tuesday by Fox News’s Tucker Carlson.

Mr. Carlson, whose broadsides have been amplified on Twitter by President Trump, attacked Ms. Duckworth in his monologue for suggesting during a Sunday interview on CNN’s “State of the Union” that it was worth discussing the value of removing monuments of George Washington, the nation’s slave-owning first president.

On Tuesday night Mr. Carlson labeled both Ms. Duckworth, who was born in Thailand to a Thai mother of Chinese descent and a white American veteran father, and the Somali-born Representative Ilhan Omar of Minnesota, “vandals” who hate the United States because they have called attention to its historical racism and inequities.

“We live here,” he said. Then, adopting language used for a century by those aiming to restrict the country to people of Northern and Western European ancestry, he added: “We don’t want to destroy it. We have every right to fight to preserve our nation and our heritage and our culture.

“And when vandals like Tammy Duckworth and Ilhan Omar tell us that we’re not allowed to question their patriotism, even as they scream about how horrible America is, we have every right to laugh in their faces, and we should,” Mr. Carlson said.

He added: “Let’s tear down our statues, rename our capital city Sharpton or Mandela and let the revolution continue. Tammy Duckworth is not a child, at least not technically; she is a sitting United States senator.”

Epstein played the racist card to protect Duckworth from any criticism.

Nativist attacks on Democratic women of color in Congress are hardly new for Mr. Carlson and Mr. Trump. Ms. Omar was one of four Democratic women who were the target of “send her back” chants at a Trump rally in North Carolina nearly a year....

Epstein wrote nothing about Duckworth spreading falsehoods about Trump during interviews, such as claiming that in his speech at Mount Rushmore (land “stolen from the Native Americans”) Trump “spent more time worried about honoring dead Confederates.”

The paper piled on with an opinion piece in Friday's paper from Sen. Duckworth: "America's Imposter Patriots.” Zero chance of Duckworth’s opinion piece being withdrawn in the dishonest fashion Republican Sen. Tom Cotton online-only piece was.