That was the caricature drawn by Times White House correspondent Annie Karni in her story “A Trump Retweet: Guns Pointed at Protesters,” about a videotaped confrontation between protestors and homeowners in St. Louis that went viral. Putting the reality of the mob aside, Karni described “a peaceful march” (through a private neighborhood) that encompassed destruction of a gate, trespassing on private property and verbal shouts and threats.

She smeared both the homeowners protecting their home and President Trump for tweeting about it, which was the ostensible reason that Washington-based Karni was covering a St. Louis incident in the first place.

In case any Times reader was confused whose side they were supposed to be on, Karni threw in unnecessarily racial and loaded (pardon the pun) terminology. 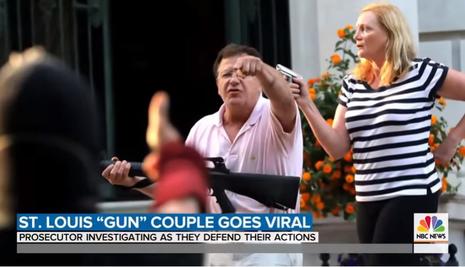 President Trump retweeted a video on Monday morning of a white man and woman brandishing a semiautomatic rifle and a handgun at peaceful black protesters in St. Louis over the weekend, amplifying a surreal scene that embodied the racial divisions roiling the country.

Mr. Trump’s promotion of the St. Louis confrontation was the second time in two days that the president used his social media platforms -- which he often credits with allowing him to circumvent mainstream news outlets -- to exacerbate racial divisions as Americans have been protesting police brutality and demanding social justice reforms after the killing of George Floyd.

In the video from the protest on Sunday in St. Louis, a barefoot white man dressed in a pastel pink polo shirt and khakis emerges from his marble mansion and appears to threaten protesters who are marching down a private residential street. A woman, also barefoot, stands next to him in a pair of black capri pants, with her finger on the trigger of a silver handgun she points at the protesters.

From her perch in D.C., Karni insisted the protest, which ended with the gate to the private community destroyed, was wholly “peaceful.” That coverage is in keeping with the paper’s ludicrous evasion of actual violence at left-wing protests.

The protesters were participating in a peaceful march to the home of Lyda Krewson, the Democratic mayor of St. Louis, in order to demand her resignation after she released the names and identifying details of individuals who supported defunding the police.

The group can be heard banging on drums and yelling to one another, “Keep moving!” as they walk past the couple threatening them with firearms. According to the St. Louis Post-Dispatch, the white couple in the video were identified as Mark T. McCloskey and Patricia N. McCloskey, both personal injury lawyers.

But NewsBusters pointed to local CBS affiliate KMOV, which noted in a photo description that protesters “broke down a gate in the neighborhood to march past their home.”

“It was like the storming of the Bastille, the gate came down and a large crowd of angry, aggressive people poured through,” Mark McCloskey said. “I was terrified that we’d be murdered within seconds. Our house would be burned down, our pets would be killed.”

"A mob of at least 100 smashed through the historic wrought iron gates of Portland Place, destroying them, rushed towards my home where my family was having dinner outside and put us in fear for our lives," Mark McCloskey said, and shared photos of the destroyed gate.