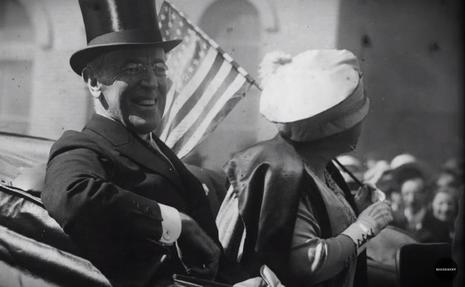 The left has come for former progressive President Woodrow Wilson, perhaps the founding father of the modern-day liberal state, for his deep racism and the segregationist policies he pushed both as president of Princeton University and president of the United States from 1913-1921.

Wilson served as president of Princeton University and as governor of New Jersey before he was elected president of the United States in 1912. While he is perhaps best known as the architect of the League of Nations, the precursor to the United Nations, and is considered by some to be a founder of modern liberalism, his legacy has faced increasing scrutiny in recent years.

“Increased scrutiny” by whom?

The paper wasn’t always critical of President Wilson’s views on race, which were objectionable even at the time. When popular conservative voices raised the same alarm a decade ago, they had their motives questioned and their concerns waved away by the Times, most notoriously in an online discussion hosted by the paper.

The online symposium, featuring six scholars, appeared in 2010 under the slanted rubric “Hating Woodrow Wilson.” Check the sneering, cynical tone of the introduction:

Franklin Roosevelt has easily held the top spot on the conservatives' list of worst presidents, but Woodrow Wilson, who was in office from 1913 to 1921, has given him strong competition in the last couple of years.

Why is that? The many followers of Glenn Beck would know the answer, as explained in a Sunday Magazine article in The Times a week ago. The Fox News host has railed against the 28th president's leadership of the Progressive Era's expansion of federal and police power that has been detailed by conservative scholars like Ronald J. Pestritto and popularized in "Liberal Fascism," a 2008 book by Jonah Goldberg, a National Review columnist.

Why is Woodrow Wilson singled out and not, say, Theodore Roosevelt, who in popular history is far more associated with the Progressive cause? What in the current political climate is continuing to fuel the criticism of Wilson?

A late 2007 headline over a book review of Jonah Goldberg’s best-seller Liberal Fascism, which jump-started the new debate over Wilson’s racial views, was dismissive of the very idea of Wilson the racist: “Heil Woodrow!” Goldberg was distinctly underwhelmed by the Times’ 2010 discussion:

A few of the folks use it as an excuse to beat up on Glenn Beck, even trying to make him into a mouthpiece for Leo Strauss (no, really). Others get bogged down in the question of motives, as if motives were relevant to the substance of the debate, particularly when all of the “defenders” are unwilling or unable to offer much, if any,  substance in Wilson’s defense.

Even as the paper gradually woke up to Wilson hateful views, conservatives were given no credit for being ahead of the debate.