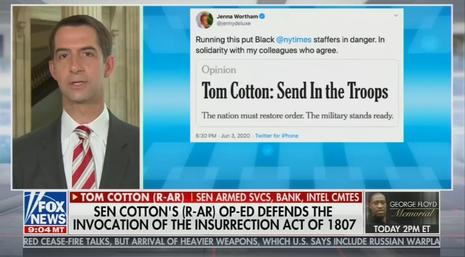 Liberal feminist Roxane Gay has a new gig at the New York Times as the paper’s “Work Friend” work-advice columnist, and she used a fascinating query to launch her latest column, “Taking a Stand Against an Employer.” Twist: That "employer" happens to be the New York Times itself.

An employee of the paper was appalled by the paper’s publication of an op-ed by Republican Sen. Tom Cotton of Arkansas that called for military troops to be deployed to quell the looting and rioting that accompanied the protests over George Floyd's killing:

I work at The New York Times. On June 3, the Opinion section ran an Op-Ed by Senator Tom Cotton that I found deeply appalling. It wasn’t the first editorial decision Opinion made that has received public pushback -- nor the newsroom editors, for that matter. But this Op-Ed put our Black staff and reporters covering protests at risk.

I love my employer. I believe in the importance of The Times as an institution and am proud of my work in support of it. But I’m worried about the future of our publication and our role in the current crisis....

I guess I’m asking: What should I do when my employer does something incredibly stupid?

The letter was of course unsigned.

When The Times published this Op-Ed, it was an egregious lapse in judgment -- not because the senator is conservative and espousing a disagreeable opinion, but because, I would argue, he was advocating fascism. He was vigorously encouraging the use of violence to subdue what he called rioters -- but what I would call people protesting unchecked police brutality against black people. This was not a matter of considering a supposedly different perspective on the protests taking place around the world. There are no two sides to racism, fascism or tyranny. This was definitely one of those moments where you could voice your disagreement and concern to your employer, ideally in concert with colleagues -- and that was exactly what happened....

After expanding on the common-sense idea that “You have to pick your battles,” Gay warned that that concept can’t be a cop-out, and actually brought up the Floyd killing as comparison.

That’s the tidy answer that doesn’t really force you to make the difficult decision. But now, more than ever, with so much at stake, we have to be willing to make difficult decisions. We have to be willing to make ourselves uncomfortable in service of what’s right. When the Minneapolis police officer Derek Chauvin kept his knee on George Floyd’s neck for nearly nine minutes, three of his co-workers stood by and did nothing....

Gay is quite a radical choice for the benign-sounding slot, proving the Times can inject politics into every avenue of life. Last year Gay said of former White House press secretary Sean Spicer’s turn on Dancing With the Stars,  “There is no friendship with people who enable fascism.”