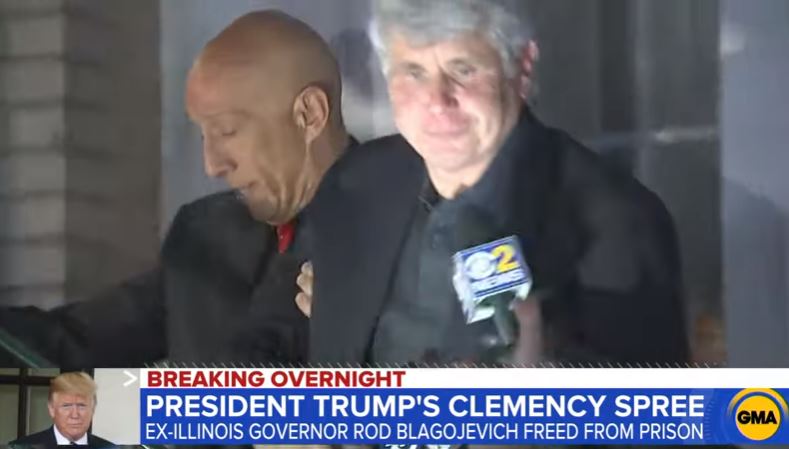 On Wednesday, the front page of The New York Times was topped with a hostile lead story: “Trump Exerts His Power With a Spree of Pardons – Critics Denounce Clemency for Blagojevich, Milken and Kerik as Undeserved” by Michael Shear and Maggie Haberman.

Catch the echo of “crime spree” in the headline? This was all about aiding rich and powerful white guys:

President Trump, citing what he said was advice from friends and business associates, granted clemency on Tuesday to a who’s who of white-collar criminals from politics, sports and business who were convicted on charges involving fraud, corruption and lies -- including the financier Michael R. Milken.

The president pardoned Mr. Milken, the so-called junk bond king of the 1980s, as well as the former New York City police commissioner Bernard B. Kerik and Edward J. DeBartolo Jr., a former owner of the San Francisco 49ers. He also commuted the sentence of Rod R. Blagojevich, a former Democratic governor of Illinois.

Mr. Trump has repeatedly stated his commitment to a criminal justice overhaul and addressing the excessive sentences given to minorities....

But the president’s announcements on Tuesday were mostly aimed at wiping clean the slates of rich, powerful and well-connected white men. And they came after years of sophisticated public relations campaigns aimed at persuading Mr. Trump to exercise the authority given to him under the Constitution.

He was particularly critical of the 14-year prison sentence for Mr. Blagojevich, who was convicted of trying when he was governor of Illinois to essentially sell the Senate seat vacated by Barack Obama when he became president. Mr. Blagojevich also once appeared on the reality TV series “The Celebrity Apprentice,” which Mr. Trump hosted.

The Times took a different tone when it was Barack Obama making controversial pardons and commutations. Shear and Haberman huffed that Obama and George W. Bush "largely reserved their clemency authority for people convicted of nonviolent, low-level drug crimes and other offenses." A March 2016 story highlighted praise for Obama's drug commutations, and the only criticism was the hint he could do more. Today's story had harsh words from Democrat Rep. Bill Pascrell and Sen. Bernie Sanders.

Trump's commutations for Tynice Nichole Hall and Crystal Munoz for "low-level drug crimes" were not mentioned in the article (although they were below the story on page A-13 in the paper).

The story also didn’t mention more controversial moves by President Obama, including his clemency for Oscar Lopez Rivera, a member of a terrorist group for Puerto Rican independence known as F.A.L.N. that carried out a nationwide bombing campaign, including an attack at Fraunces Tavern in New York City in 1974 that killed four.

Also not noted was Obama's controversial commutation of the sentence of Bradley Manning for handing a trove of military and intelligence secrets to WikiLeaks.

One of these same reporters, Michael Shear, wrote in December 2016 about Obama’s pardons and clemencies under the headline “Obama’s 78 Pardons and 153 Commutations Extend Record of Mercy.” No “spree” there.

PS: Mollie Hemingway at The Federalist caught Times reporter Eric Lipton in a double standard on his Twitter feed, calmly noting Obama’s pardons and commutations back then (“A big day for executive actions”) and commutations while shrieking now about Trump’s: "A moment that live in history. And deserves to be remembered. President Trump is now both the executive and judicial branch...."