New York Times Gets Excited, Invokes John Dean and ‘an Echo of Watergate’ 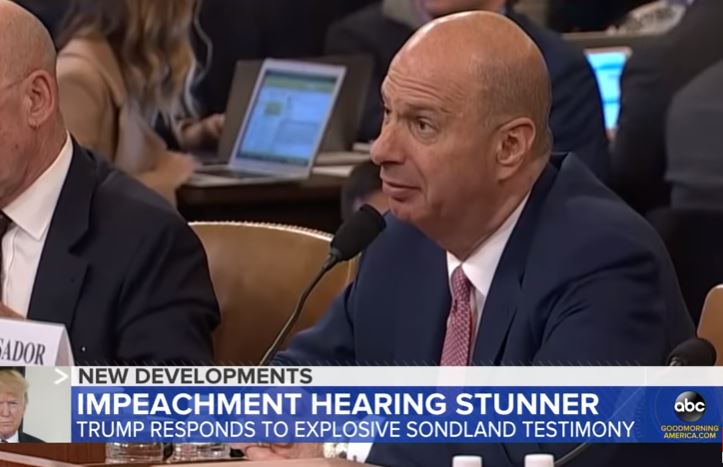 The headline to the “jump” page betrayed the same giddiness: “An Echo of Watergate As Sondland Remarks Refocus the Debate.” That would be Gordon Sondland, ambassador to the European Union, whose testimony before Congress on Wednesday alleging Trump pressured Ukraine to conduct investigations into the Biden family excited the media and the Democratic Party.

Baker has become increasingly colorful in his condemnation of President Trump; in an October 2019 book review he wrote scathingly:

On Thursday, Baker didn’t wait a single sentence before breathlessly declaring Sondland’s testimony a “John Dean moment” -- as in John Dean, Nixon's White House counsel and the infamous witness for the prosecution in the impeachment of President Richard Nixon.

Gordon D. Sondland had not even finished his testimony on Wednesday before it was being called the “John Dean moment” of the President Trump impeachment drama. With the presidency on the line, a once-trusted lieutenant pointed the finger at Mr. Trump in a proceeding that could lead to Watergate-style charges of high crimes and misdemeanors.

For the first time, Mr. Trump’s critics got the sort of viral moments they have craved, crisp accusatory cancer-on-the-presidency lines uttered on camera that can now be played over and over again on social media and cable television, making clear just who was in charge of the campaign to pressure a foreign power to help bring down the president’s domestic political rivals.

“We followed the president’s orders.”

“The president directed us to do so.”

“At the express direction of the president of the United States.”

Even John Dean thought it was a bit of a John Dean moment for Mr. Sondland, the million-dollar Trump donor turned ambassador to the European Union. “He decided to put the truth over party and president, because the president really can’t be pleased with it,” Mr. Dean said in an interview after the hearing. “It’s going to change the dynamics of the proceedings.”

The testimony before the House Intelligence Committee energized Democrats who called it their smoking gun and seemed to take back Republicans....

But Mr. Sondland was more of a flawed witness than Mr. Dean, who was the former White House counsel when he testified against President Richard M. Nixon in 1973. While Mr. Dean described many meetings about the Watergate cover-up with Mr. Nixon, Mr. Sondland could only recall the details of one conversation in which Mr. Trump made his wishes clear and even then the words uttered by the president were somewhat elliptical.

Republicans on the committee eventually rallied to press Mr. Sondland about his direct communications with Mr. Trump. Under questioning, Mr. Sondland acknowledged that the president never explicitly told him that $391 million in suspended security aid was tied to Ukraine publicly committing to investigate Democrats; that was a connection he “presumed.”

But Baker assured readers that despite that:

[Sondland] was the witness Democrats had hoped he would be. In their quest to impeach Mr. Trump, Democrats have been looking for a John Dean figure all year without success....

That gave renewed energy to Democrats, who predicted a burst of momentum that may make it harder for Senate Republicans to look away if it gets to a trial. “Biggest day ever,” said Rahm Emanuel, a former congressman, mayor of Chicago and senior aide to President Bill Clinton and Mr. Obama. “It changes everything. There is no line of defense left.”

Baker extended the Dean comparison, then concluded with a quote from the legend himself:

“I’d call it a modified limited hangout,” Mr. Dean said, recalling a phrase made famous during Watergate, “which means he protected himself, nailed a few other people and gave limited insights into what’s really going on.”