Brexit-Sliming NY Times Has Nerve to Attack 'Right-Wing' Pro-Brexit Press (Like the BBC?) 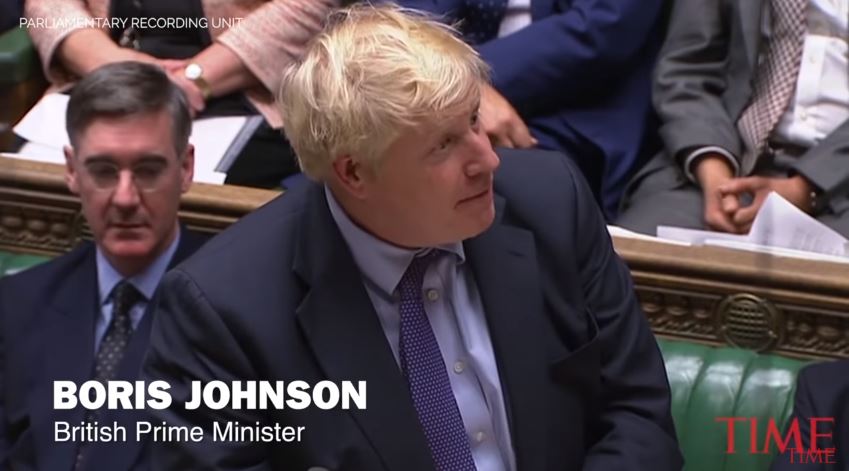 Some nerve: New York Times anti-Brexit reporter Benjamin Mueller devoted 1,350 words Monday to going after his competitors on the Brexit-beat, accusing other media outlets of slanting the news in favor of British Prime Minister Boris Johnson’s quest to fulfill the 2916 vote to withdraw the United Kingdom from the European Union. As if the Times and Mueller himself hasn’t been notoriously, often hysterically, anti-Brexit in news coverage: “Pro-Brexit Press Frames Johnson as Defiant Hero.” The text box: “Ignoring a string of defeats in Parliament and a close deadline.”

The online headline deck: “For Pro-Brexit Press, Boris Johnson Is Already a Winner -- The right-wing newspapers that dominate in Britain shaped a narrative of events that could have not been more pleasing to the prime minister.”

By the time the Sunday newspapers went to press this past weekend, Prime Minister Boris Johnson of Britain had done something that he judged worse than laying “dead in a ditch”: asking the European Union to postpone Brexit, the project at the heart of his political being.

And yet Britons awoke on Sunday to front pages depicting a swaggering prime minister, tousle-haired and defiant, refusing to back down.

“Johnson refuses to sign Brexit delay letter,” The Sunday Telegraph blared, referring to a ploy that, along with the extra letters he sent, was promptly ignored by top European officials.

The Sunday Express, a tabloid, castigated Britain’s Parliament for having refused to give Mr. Johnson’s Brexit deal the approval he craved. “Why won’t they let us leave?”

The gloating news coverage turned what analysts called an undeniable setback into an act of great resolve, averting the sort of humiliating news moment that ultimately doomed Mr. Johnson’s predecessor, Theresa May.

Despite a losing streak in Parliament and serious concessions to European officials in Brexit talks, Mr. Johnson has managed to cast himself in much of the British print press as a conquering hero, the country’s best hope in a Britain-versus-Europe conflict that he helped foment as a Telegraph journalist decades ago.

The Times reporter kept picking at other media outlets for being insufficiently hostile toward Prime Minister Boris Johnson and Brexit.

Mr. Johnson’s success in parts of the press has led to a reckoning over British news coverage of Brexit more broadly, with critics accusing major broadcasters of taking their cues too often from right-wing newspapers and of failing to inform Britain about the long and difficult trade negotiations that await even if a Brexit deal is approved.

Britain’s media landscape is considerably more polarized than the United States’, and its newsstands are dominated by right-wing papers that have long rooted for Brexit, giving Mr. Johnson a ready-made audience in the press for his maneuvering.

Mueller worked sexism into the mix.

Having worked as a journalist, first as a Brussels correspondent for The Daily Telegraph and recently as a columnist, Mr. Johnson is at home in the backslapping, male-centric media world in a way Mrs. May never was. Some journalists refer to him simply as “Boris,” a familiarity that evaded Mrs. May....Some analysts also said that Mr. Johnson, both in the British press and among the public, is being forgiven for bungles because he is a man....

“Boris Johnson is kind of ‘hail fellow well met,’ blustering Eton schoolboy, and Theresa May was an uptight, hard-working, completely uncharismatic head girl,” said Angela Phillips, a professor of journalism at Goldsmiths University of London, describing how the two leaders were portrayed in the right-wing press. “Quite a lot of it has been incredibly sexist.”

In much of Mr. Johnson’s favorable news coverage, analysts have seen the hand of Dominic Cummings, the prime minister’s chief aide, who has long sparred with the British press in his government posts.

(Indeed, Mueller cowrote a shocking hit piece on the “political assassin” Cummings in September. Mueller has had his hand in many histrionic anti-Brexit hit pieces since Great Britain had the bad manners to vote in favor of leaving the European Union.)

The Times, which feels free to push its own (unconfessed) liberal outlook in the news pages, is hypocritically critical when less-liberal papers doing the exact same thing on hot-button issues like radical Islam or Brexit.

But if nothing else, the right-wing press can still set the agenda for major television outlets like the British Broadcasting Corporation, Professor Phillips said.

The state-broadcaster BBC has long been a safely liberal purveyor of conventional wisdom, especially in matters relating to the European Union, which makes the idea of a right-wing pro-Brexit BBC rather outlandish.