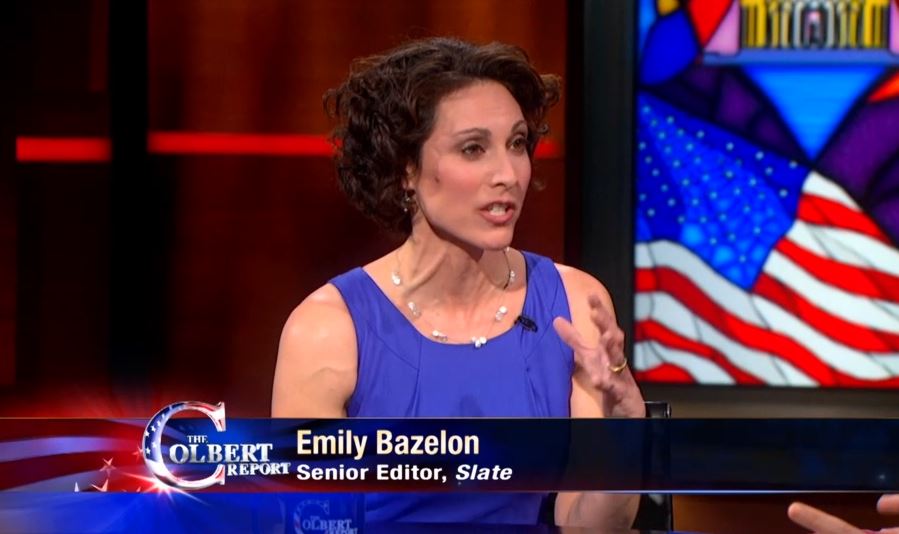 Emily Bazelon, a liberal writer on legal issues, is a staff writer for the New York Times Sunday Magazine, but she was lead author of the earth-shattering story that Supreme Court nominee Brett Kavanaugh apparently threw ice (yes, ice) during an altercation at a bar in New Haven, Conn. in 1985. The online headline that appeared Monday evening was explicit: “Kavanaugh Was Questioned by Police After Bar Fight in 1985.”

Bazelon is also a fellow at Yale Law School, Kavanaugh’s alma mater, and upon his nomination in July she made clear her contempt. Brent Scher at the Washington Free Beacon uncovered this Twitter gem from July 9, after Yale Law School had the temerity to support the Supreme Court nomination of its alum Kavanaugh. It reveals Bazelon has no business reporting on this story in the supposedly straight news pages of the Times, especially without disclosure:

As a YaleLawSch grad & lecturer, I strongly disassociate myself from tonight’s praise of Brett Kavanaugh. With respect, he’s a 5th vote for a hard-right turn on voting rights and so much more that will harm the democratic process & prevent a more equal society.

And now she’s breaking anti-Kavanaugh news (or rather, “news”) in the Times about Kavanaugh throwing ice in a bar a generation ago.

The print edition headline on Tuesday was poetically evasive: “At Beery Yale, Curses, Fists, Glass, Blood And a Student.” Perhaps the paper was abashed by the social media backlash over both the silliness of the story and the idea of a Yale Law School Kavanaugh-hater getting the lead byline (Ben Protess cowrote) without any acknowledgment of her publicly stated anti-Kavanaugh feelings. But the text box got the name in: “A police report puts Kavanaugh at the center of a melee.”

Responding to the outcry over reporter Bazelon’s conflict regarding Kavanaugh, a Times spokesperson told Mediaite:

Emily Bazelon is a writer for The New York Times Magazine who occasionally writes op-eds for the opinion section. She is not a news reporter. Her role in this story was to help colleagues in the newsroom gather public documents in New Haven, where Emily is based. In retrospect, editors should have used a newsroom reporter for that assignment. To be clear, the story is straightforward, fact-based and we fully stand behind it.

As an undergraduate student at Yale, Brett M. Kavanaugh was involved in an altercation at a local bar during which he was accused of throwing ice on another patron, according to a police report.

The incident, which occurred in September 1985 during Mr. Kavanaugh’s junior year, resulted in Mr. Kavanaugh and four other men being questioned by the New Haven Police Department. Mr. Kavanaugh was not arrested, but the police report stated that a 21-year-old man accused Mr. Kavanaugh of throwing ice on him “for some unknown reason.”

A witness to the fight said that Chris Dudley, a Yale basketball player who is friends with Mr. Kavanaugh, then threw a glass that hit the 21-year-old man in the ear, according to the police report, which was obtained by The New York Times.

If this sounds vaguely familiar, it’s because Kavanaugh classmate Chad Ludington referenced it:

“On one of the last occasions I purposely socialized with Brett, I witnessed him respond to a semi-hostile remark, not by defusing the situation, but by throwing his beer in the man’s face,” Mr. Ludington said in the statement. Mr. Ludington, a professor at North Carolina State University, said he came forward because he believed Judge Kavanaugh had mischaracterized the extent of his drinking at Yale.

Bazelon of course pointed to her Times story on her Twitter on Monday night:

Kavanaugh in a bar fight, 1985 in New Haven. This is the story behind Chris Ludington’s report. Kavanaugh reportedly started it by throwing ice at a guy. Chris Dudley reported to have thrown a glass. The guy went to the hospital.

She followed up with this sleazy, impossible-to-disprove insinuation: “No report of an arrest. Could have been expunged, I’m told.”

Bazelon’s fear of a right-wing Supreme Court is long-standing. As senior editor at Slate, she emphasized her fears of a conservative Supreme Court while explaining her vote for Obama in 2008: “...he is about 1,000 times more likely than John McCain to choose Supreme Court justices who will resist rather than further the push to the right by Bush's picks, Chief Justice John Roberts and Justice Samuel Alito...”

Now she gets to try and sink a potential conservative justice by reporting for the Times.