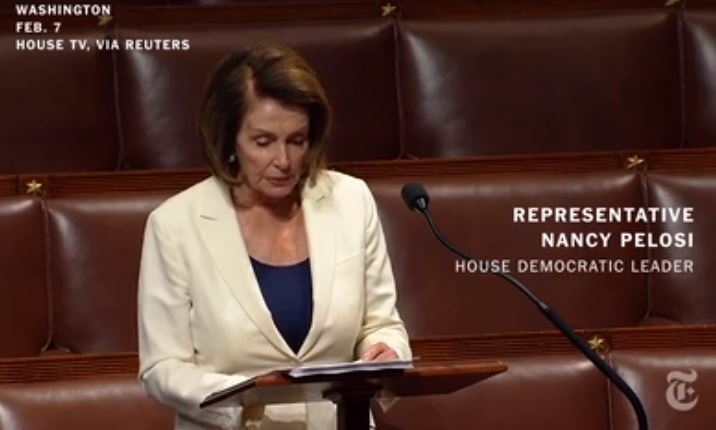 Her marathon monologue -- highly unusual for the House, which has no equivalent to the Senate filibuster -- appears to have set the record for the longest continuous speech in the chamber, dating to at least 1909, according to the House historian. It tied up the House into the evening, delaying debate on a bill intended to spur competition in the mortgage market.

It also demonstrated, yet again, why Ms. Pelosi, 77, of California, remains one of the most enduring -- and to many, infuriating -- figures in Washington.

Ms. Pelosi’s talk was quickly called the “DACA-Buster” on Twitter. (Twitter users also noted, in admiration, that Ms. Pelosi never removed her four-inch heels.)....Ms. Pelosi read heart-rending testimonies from Dreamers who had written their representatives about their lives....

Stolberg let the pro-abortion Pelosi pose as a devout Catholic.

At one point, perhaps running out of stories, Ms. Pelosi suggested she might turn to the Bible. “Perhaps I should bring my rosary, blessed by the pope,” she said.

The contrast in coverage was striking between Pelosi and Kentucky’s Republican Sen. Rand Paul, a budget hawk and civil libertarian. Thomas Kaplan’s lead story Friday (online version) on the budget passage prominently featured Rand, who temporarily blocked a vote to stop a government shutdown by attempting to offer an amendment to the big-spending bill.

The House gave final approval early Friday to a far-reaching budget deal that will reopen the federal government and boost spending by hundreds of billions of dollars, hours after a one-man blockade by Senator Rand Paul of Kentucky delayed the votes and forced the government to close....As midnight approached, Mr. Paul did not relent, bemoaning from the Senate floor what he saw as out-of-control government spending and repeatedly rebuffing attempts by his fellow senators to move ahead with a vote....Mr. Paul’s ideological opponents were not buying his fiscal rectitude either. Senator Brian Schatz, Democrat of Hawaii, posted on Twitter: “Rand Paul voted for a tax bill that blew a $1.5 trillion hole in the budget. Now he is shutting the government down for three hours because of the debt...."

Because standing on principle is just so tiresome when Republicans do it.

While the Times embraced Pelosi’s publicity stunt, it is hostile to limited-government Rand. In June 2015 reporter Jonathan Weisman reduced Paul's attempt to squash the National Security Agency's bulk information collection program to a desperate, cynical campaign ploy: “With his presidential campaign flagging, Senator Rand Paul, the Kentucky Republican known for a strong libertarian bent and a penchant for dramatics, understood on Sunday that he had to make good on his “Stand With Rand” sloganeering.”