NY Times Not Yet on Board Red State Train: '2 Americas: One That Hates, One That Heals'

Post-election, the New York Times seems dimly aware it has a “red state” credibility problem, but its pattern of coverage shows it has a long way to go. Sunday it whined about how the imminent Trumper invasion posted a threat to the cultural life of Washington, D.C., not exactly a top issue for blue-collar Macomb County voters.

They aren’t as comfortable in red Texas, as shown by Manny Fernandez's stand-offish approach to his conservative fellow Texans. Also, Reporter Adeel Hassan got an awful lot of front-page mileage out of a distressing anecdote in “Refugees Discover 2 Americas: One That Hates, One That Heals.” The NYT also asked the question on the minds of red state America -- How does Mexico feel about all this?

On Monday, the Houston-based Fernandez filed as part of a Times roundup of views trying to make sense of Trump’s victory, under the subhead “Taking, and Giving, Offense.” Fernandez’s stand-offish approach to his conservative fellow Texans is evident from his slanted, anecdotal roundup of the crazy things some Texas politicians have said.

Before America had a presidential candidate who offended Latinos, African-Americans, Muslims, women and the disabled, Texas had Sid Miller, the state agriculture commissioner, who compared Syrian refugees to snakes and called Mrs. Clinton an obscene term on Twitter.

None of this bothered Texas Republicans a great deal. There were a few apologies and statements of regret, but not much more.

Mrs. Clinton’s supporters in blue America cringed at Mr. Trump’s inflammatory remarks during the campaign, but his supporters throughout red America barely flinched. They were used to it. They lived in places where public figures had been making Trump-esque comments for years. In red Texas in particular, I have found, the notion of being offended is regarded as a “blue” concept. 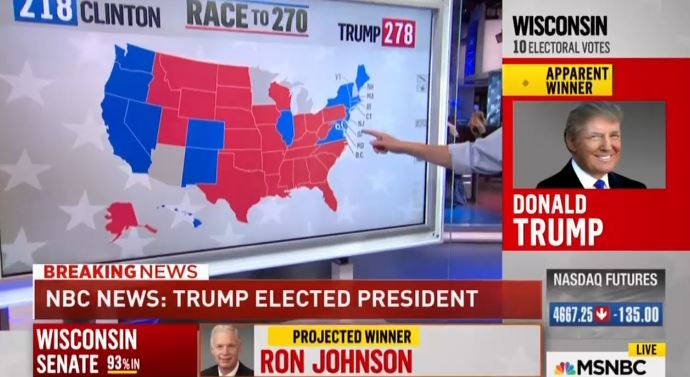 More America hate, this time in the blue state of Maryland. Reporter Adeel Hassan got an awful lot of front-page mileage out of a distressing anecdote (that added up to less than the headline implied) in Tuesday’s “Refugees Discover 2 Americas: One That Hates, One That Heals.” (Gee, wonder what the Times means by that?)

The hater turned out to be a 14-year-old kid who left a nasty note – not good, but perhaps not a harbinger of a wave of neo-Nazi hate crimes.

Ra’ad and Hutham Lalqaraghuli are no longer sure which America they’re a part of.

Is it the hateful country they confronted a few weeks before the presidential election, when someone left a note at their door that said, “Terrorist Leave no one wants you here”?

Or is it the generous country of welcoming strangers who heard about their ordeal and showered them with gifts and cards with positive messages?

The victory of President-elect Donald J. Trump has intensified their whiplash. After a year in the Maryland suburbs, having arrived with their four children as refugees from Iraq, they find themselves comparing the threats they fled with those that might still emerge.

They did not sleep on election night after watching television coverage of the results.

The controversial Islamic advocacy group (and NYT favorite) CAIR made an appearance.

Advocates -- like the Council on American-Islamic Relations, which is helping the family -- say that many refugee families are reluctant to come forward when they become victims of hate crimes because they fear a greater backlash.

But after the note appeared -- with a crude drawing of a woman in a hijab -- Mr. Lalqaraghuli notified the police, telling an officer in the neighborhood who happened to be on a foot patrol near his apartment.

The police said that the note had been written by a 14-year-old neighbor, and that officers had talked to her and her parents but determined that no crime had been committed.

The neighbor’s family did not respond to a message requesting comment.

Criminal or not, the episode was enough to stir up a response -- an effort to counter intolerance.

Mr. Lalqaraghuli, who works as a driver, said he greatly appreciated the outpouring of support.

But after Mr. Trump’s victory, he said, it is hard to trust that acceptance will emerge as the country’s dominant force.

In Mexico City, reporter Azam Ahmed asked the question on the minds of red state America -- How does Mexico feel about all this? -- in Tuesday's “Mexico Asks: What’s Next After U.S. Vote?”

Ever since the election of Donald J. Trump to the American presidency, Juan Pardinas, a Mexican academic, has been thinking back to his childhood.

Specifically, the Cold War era, when his days as a young boy were filled with a medium-grade anxiety that the Russians might incite a nuclear war that could devastate North America.

Even the weather in Mexico is now Trump’s fault.

Clouds have descended over Mexico, miring it in a state of anguish and paralysis after the election of Mr. Trump to the highest office in the world. They are clouds of uncertainty and fear, of self-doubt and insecurity. There were even actual storm clouds hanging over the capital in recent days, a literal echo of the nation’s state of mind.