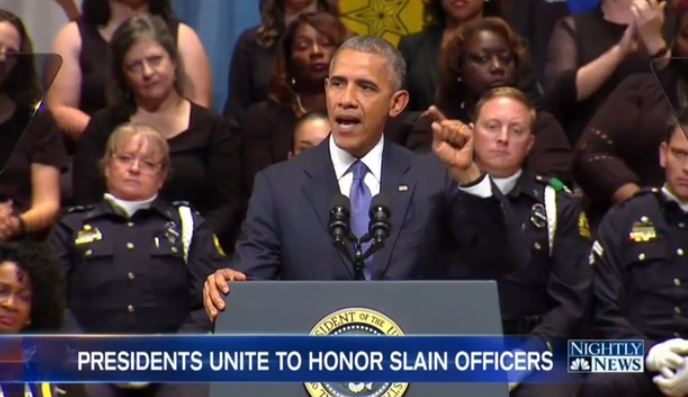 President Obama’s speech at a memorial service for the five police officers assassinated in Dallas while patrolling a Black Lives Matter protest led Wednesday’s New York Times. The paper portrayed Obama flatteringly as having “spoke hard truths to both sides” at the service, while downplaying how the President politicized the memorial by thumping for gun-control, ranting about how a Glock pistol was easier to get than a book.

The story was unnecessarily sycophantic, while tamping down criticism of Obama’s politicized tone: “Obama Consoles And Challenges A Shaken Nation – At A Dallas Memorial – Calling on the Police and Protesters to Find Common Ground.”

Earlier this year, Donald Trump gave a speech at Liberty University where he referred to the second epistle to the Corinthians as “2 Corinthians.” It’s usually, but by no means always, said as “Second” Corinthians. Scottish Christians, such as Trump’s mother, say it the way he did when he read the speech written by Tony Perkins, whom he blamed for the error.

Hemingway noted how the media pounced on Trump, then followed up:

So what happened when President Obama made an actual mistake in his speech at the memorial for the murdered Dallas police officers?

First let’s look at what he said:

But also surprising is that the media didn’t notice that President Obama had ascribed the passage to the wrong book of the Bible. That includes the New York Times’ Gardiner Harris and Mark Landler, who wrote:

Mr. Obama acknowledged the limitations of his own words, and quoted from the Gospel of John: “Let us love not with words or speech but with action and in truth.”

But that section didn’t make the final version of the Times story on Wednesday; neither was Obama’s religious flub acknowledged anywhere else. The part about the “Gospel of John” was taken out of the online version without comment between 5pm and 9pm Tuesday evening, as noted by NewsDiffs. Did the paper figure out Obama had flubbed the verse and decided to save him from embarrassment, or did it drop the religious reference for other reasons? If the latter, then why did the paper bother to mention his Scripture quotation at all?

“I’m here to insist that we are not as divided as we seem,” Mr. Obama said at a memorial service for the officers in Dallas, where he quoted Scripture, alluded to Yeats and at times expressed a sense of powerlessness to stop the racial violence that has marked his presidency. But Mr. Obama also spoke hard truths to both sides.

It was the poignant speech of a man near the end of his patience about a scourge of violence that he said his own words had not been enough to stop. Mr. Obama spoke after a week in which the police killed two black men, in Minnesota and Louisiana, and Micah Johnson, the Army veteran, killed the five officers in Dallas.

Americans, he said, “can turn on the TV or surf the internet, and we can watch positions harden and lines drawn, and people retreat to their respective corners, and politicians calculate how to grab attention or avoid the fallout. We see all this, and it’s hard not to think sometimes that the center won’t hold and that things might get worse.”

But Mr. Obama insisted on holding out hope.

“To me, this is one of his best speeches I’ve ever heard,” said Chief Warren Asmus of the Los Angeles County Sheriff’s Department, who saw the speech as a milestone in the acrimonious national debate about policing and race.

In an example of labeling slant, Harris and Landler pitted unlabeled left-wing protesters vs. conservatives.

Many conservatives were angry about a reference Mr. Obama made in his remarks to gun control, when he said that “we flood communities with so many guns that it is easier for a teenager to buy a Glock than get his hands on a computer or even a book.”

Also on Wednesday, Amanda Taub’s latest “The Interpreter” column, which purports to put news in context, assured readers that even after the assassination of five police officers at a rally, “Black Lives Matter is a nonviolent protest movement.” (The conservative Tea Party, on the other hand, was constantly blamed by the Times for merely potential, hypothetical violence.)

That pattern plays out repeatedly in clashes that deal with group identity, as in Northern Ireland and the Israeli-Palestinian conflict, in which one side perceives even a lone attacker as representing his or her group as a whole.