Thursday’s New York Times was particularly dense with bias against the "hard-right" and "far-right" Republican Party, starting on the front page, where a potentially intriguing story about Latino candidates Ted Cruz and Marco Rubio turned into a criticism of GOP immigration policy, and reaching the back page, with an editorial hitting the Republican Party for its "Appalling Silence on Gun Control" (the candidates "dwelled darkly" about the actual threat of Islamic terorrism instead).

Here's how the Times set up its Cruz-Rubio faceoff by Lizette Alvarez and Manny Fernandez: “2 Latino Candidates at Odds, Heritage and Ideology Aside.” 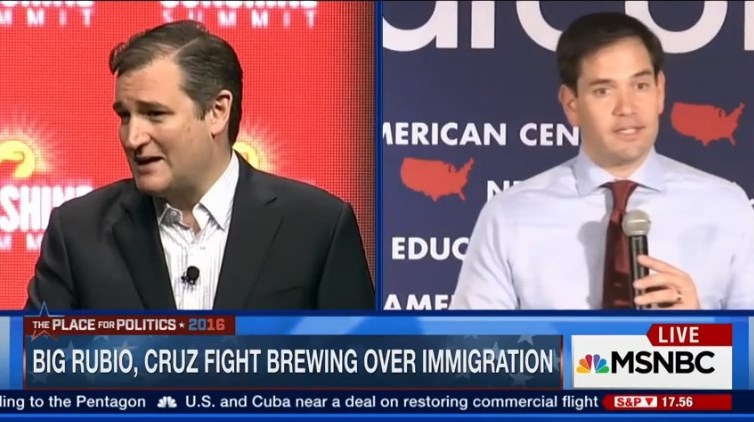 In Miami. One candidate, Marco Rubio, nurtured by the sprawling Cuban-American community here, bounces effortlessly between two cultures -- fritas and hamburgers, Spanish and English -- in a city so comfortably bilingual that news conferences pivot between the languages.

The other, Ted Cruz, is partial to cowboy boots, oversize belt buckles, hard-right politics and the fire-and-brimstone style of the Baptist church. Mr. Cruz, a rare Cuban-American outlier in a state where Hispanic usually means Mexican-American, attended overwhelmingly white Christian schools in Houston and prefers Spanglish to Spanish.

Of course, this being the Times, and “hard-right” Cruz and Rubio being Republican candidates, this won’t be a story of inspirational uplift or the sign of a diverse GOP, but instead a chiding of Republican's stubborn failure to support amnesty for illegal immigrants. Reports Lizette Alvarez and Manny Fernandez wrote:

But this year’s campaign tale has not been the kind of Hispanic coming-of-age story many Latinos had expected, particularly given their growing numbers and influence in the polls.

Three years after Republicans vowed to do a better job courting Latinos in the wake of their 2012 presidential defeat, the party has done the opposite as immigrants come under repeated assault by Mr. Trump.

The harsh tone and the increasingly restrictive policies on immigration that have been floated have complicated the prospects of Mr. Cruz and Mr. Rubio who, as Latinos, had a head start with Hispanic voters.

The similarities between the two candidates are striking. Both men are first-generation Americans of Cuban descent, born five months apart. Both come from staunchly anti-Castro families that fled Cuba before the revolution. And both embrace conservative positions on issues including abortion, guns, the minimum wage and health care.

With so many here touched by the vagaries of immigration policy, most in Miami want to improve the law. Recognizing this, Mr. Rubio joined Democrats in writing an immigration reform bill in 2013 that created a path to citizenship and fortified border security. For this, Mr. Rubio earned widespread praise.

After fierce backlash from conservatives and Tea Party supporters, though, Mr. Rubio quickly distanced himself from the bill and moved to emphasize border security and enforcement as a priority. This angered Hispanics who viewed it as an attempt to placate the conservative base. They also have criticized Mr. Rubio for failing to defend Latinos more robustly from Mr. Trump’s attacks.

The Times sidled up to the idea that Cruz was a hypocrite for praising his immigrant father because he’s hostile to most immigrants today.

Even Latino Republicans have been unsparing in their criticism of Mr. Cruz....On the stump, Mr. Cruz has embraced his Cuban father’s story, more for what it says about America than what it says about immigrants. His father fled Cuba with $100 sewn into his underwear and worked as a dishwasher to help pay tuition at the University of Texas at Austin. “America, quite simply, saved my father,” Mr. Cruz wrote.

The story is a poignant one, but many Latinos have said it falls flat for one reason: The pride Mr. Cruz feels for his father is not one he extends to the larger immigrant community.

Foreign policy reporter David Sanger bashed the party’s aggressiveness rhetoric on ISIS during the last GOP debate, while suggesting Obama was on the right track.

In a surprisingly substantive debate on foreign policy Tuesday night, Republican presidential candidates had a chance to present their alternative to what was portrayed as President Obama’s failed approach to the upheaval in the Middle East. But in their effort to demonstrate their skills at analysis and leadership, the politics and history of the region often eluded them.

At times, several of the candidates seemed uncertain about America’s past military and diplomatic interventions in the region, and none of them acknowledged Mr. Obama’s continuing attempts to negotiate a cease-fire in Syria and a political process that could lead to a change in government. For most -- with Jeb Bush apparently an exception -- the strategy to defeat the Islamic State largely seemed to boil down to this: Drop your bombs first and figure out the diplomacy later, if at all.

Also on Thursday, Matt Flegenheimer and Jonathan Martin threw out some “far-right” labeling in “Republican Candidates’ Sparring Resumes Mere Hours After Their Debate.”

Senator Ted Cruz, facing the most aggressive effort yet to sully his reputation with conservatives, absorbed a flood of attacks Wednesday from Senator Marco Rubio over immigration policy and national security, an offensive aimed at halting Mr. Cruz’s rise among Tea Party and evangelical voters.

Mr. Cruz, the Texas senator, responded by tying Mr. Rubio’s past support for a pathway to citizenship to recent concerns about terrorist threats and refugees. He also echoed some far-right commentators who have repeatedly suggested that Mr. Rubio, of Florida, is more willing to present himself as a pragmatist on immigration when speaking to Spanish-language news outlets.

Thursday’s lead editorial, “An Appalling Silence on Gun Control,” once again showed the paper desperately trying to shift the national conversation from specific fears of Islamic terrorism to vague anxiety about access to guns. The editorialists found it “remarkable” that the GOP would be “dwelling darkly on potential threats from Islamic State terrorists.” Why on earth wouldn’t they?

It was remarkable that the Republican presidential candidates’ debate this week, supposedly focused on keeping Americans safe, was devoid of questions and comments about the public health issue of gun violence.

Instead, the nine Republican rivals spent much of their time dwelling darkly on potential threats from Islamic State terrorists. And when they brought up the mass shooting in San Bernardino, Calif., this month, carried out by a couple found to be inspired by Islamic State violence, the discussion never veered to the easy gun access that enabled those killers -- and many others -- to commit swift and horrific slaughter of innocent people.

Lastly, there was an incredibly lame Times “fact check” of a Marco Rubio ad by reporter Nick Corasanti.

Senator Marco Rubio has gone on the attack recently against Donald J. Trump and Senator Ted Cruz, who are leading in the polls nationally and in Iowa. But with this commercial, which began running on Tuesday, he instead appeals directly to their core supporters: people who feel disaffected from American politics.

An oversize American flag billowing in the shadows behind him, a tiny flag pinned to his lapel, Mr. Rubio speaks softly but urgently, directly to the camera, throughout this 30-second commercial, over a swelling score of patriotic-sounding music. In a blue suit and tie, the Florida senator seems to be striving to look and sound as presidential as possible.

Mr. Rubio’s contention that Mr. Obama has been “humiliated by Putin, Iran and Islamic jihadists” would surely draw objections from many, not least the president himself, who says that his nuclear deal will prevent Iran from obtaining nuclear weapons, and that the United States-led military effort is hitting the Islamic State “harder than ever.”

The Weekly Standard was withering:

Does the New York Times understand that "fact check" is a phrase that has meaning? Because simply noting that Obama would, rather unsurprisingly, disagree with criticisms leveled against him does not constitute a factual refutation.

I know Obama is adored by the media, but shortly after the worst terror attack on American soil since 9/11, having the New York Times insulate him from criticism by insisting he's attacking ISIS "harder than ever" -- whatever that means -- is frankly embarrassing.