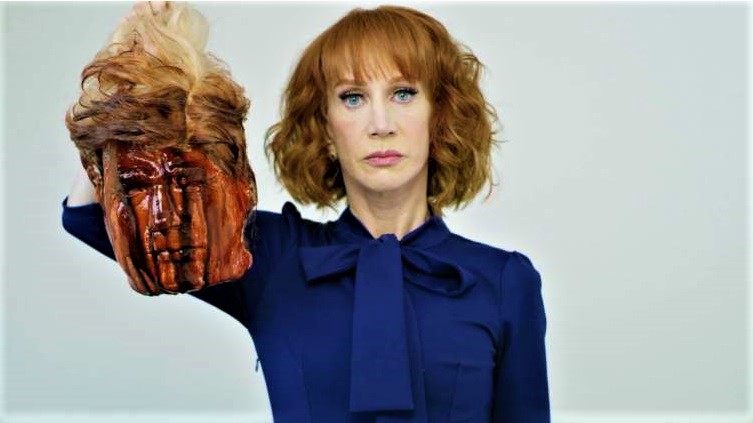 How could Kathy Griffin think she hadn’t crossed a line with her ISIS-beheads-the-president imitation? In a sense, her ignorance is understandable. Since Donald Trump was elected, there has been no lines to cross. Anything...everything....has been acceptable. The challenge has been not to temper the outrage, but to push its limits. It was “art,” she claimed at first.

Despite a videotaped apology, she was dumped by CNN, which promoted this “comedian” for ten years as New Year’s Eve entertainment in Times Square alongside Anderson Cooper. It tells you everything you need to know about CNN that up to this point, they had found her antics acceptable.

CNN started putting her on air in 2007 after an award-accepting rant at the Emmys telling Jesus Christ to “suck it.” She cracked "A lot of people come up here and thank Jesus for this award. I want you to know that no one had less to do with this award than Jesus."

Griffin has long used smears on conservatives and Republicans to boost her career. In 2010, she caused CNN stars John King and Dana Bash to laugh nervously as she described Sen. Scott Brown’s teenage daughters as “prostitutes.”

When the outrage came, she boasted. “Whenever a statement is issued against me, I`m in heaven. I feel my next special is half-written for me. And then I get to read statements allowed in my live shows which you can go to KathyGriffin.net and see the many, many cities I`ve picked up for my current tour."

Back then, the gossip site Radar was thrilled to describe Griffin’s chat with an unnamed publicist for Playgirl magazine: “I asked Kathy what star she’d like to see take a ‘celebrity spill’ and she said ‘I’d like to push Sarah Palin down the stairs.’” She also claimed Palin became John McCain’s running mate by performing oral sex on him.

The far left has coddled her and clearly, she thought she’d be the toast of the town for this mock beheading stunt. It didn’t pan out that way. On CNN, as Jake Tapper denounced the stunt on air and Cooper disavowed it as “disgusting” on Twitter. Almost everyone implicitly understood how the country would have greeted anyone “artistically” holding up a severed head of Barack Obama or Hillary Clinton.

The vast majority of Americans were nauseated...but not everyone. The delinquents at the leftist site Vox protested: “[I]t’s also important to note that she and Shields are resisting a rapidly shifting world in which women are losing access to basic reproductive health care.”

Journalist Molly Ball of The Atlantic cynically denounced the Trumps on CNN for protesting this outrage. “I have a hard time bringing myself to care about something like this. I think it just speaks to the need to see themselves as a victim that they have, that they are constantly being persecuted.”

Sen. Al Franken refused to cancel a joint appearance with Griffin in July to promote his book “Giant of the Senate.” It was a “horrible mistake,” the politician said, but “She's actually begged for forgiveness, and I believe in forgiveness.” [He has since recanted. --Ed.]

Baloney. There is no real repentance here. Everyone knows that this was an apology offered to save her line-crossing business. The Left wants her to cross the line to smash conservatives in the mouth. Incivility is the most satisfying kind of “resistance.” Once Franken & Co. get her  “back on her feet,” does anyone doubt she will return to her nasty routine?