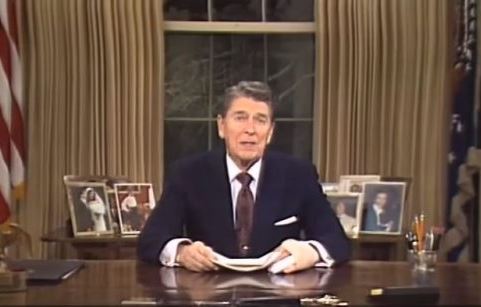 For weeks, the liberal media have celebrated all that Barack Obama means...to them. CNN produced a two-hour documentary on the Obama legacy that never mentioned things like annual trillion-dollar deficits. Fareed Zakaria wrapped up the show: “He ran an administration that was largely scandal-free and did it all the while under a microscope. Because he looked different.”

This kind of fake news will continue through Obama’s farewell address and the Trump inauguration. But let’s dig into media history to recall how differently the media treated President Ronald Reagan as he delivered his farewell address to the American people in 1989. On the night before the speech, CBS reporter Lesley Stahl spoke for the media elites on NBC’s Late Night with Bob Costas. “I predict historians are going to be totally baffled by how the American people fell in love with this man and followed him the way we did.”

That was a confession. No matter how diligently Stahl and her liberal colleagues had tried, their attacks on Reagan could not weaken his hold on the public.

Just moments after the speech, ABC brought in Sam Donaldson to kvetch: “It was a very self-congratulatory speech. The president talked about his accomplishments in very glowing terms. He talked about the deficit once. But he didn’t mention a lot of things that historians will look and say ‘No, it didn’t happen just that way and it didn’t turn out that well.’”

It was common to bring up what Reagan wouldn’t mention. The morning after the speech, ABC anchor Lark McCarthy announced: “The speech did not mention the Iran-Contra scandal, the hostages, or Panama. And there was no mention of ethics or the continuing nightmare of terrorism.” Correspondent Jeanne Meserve repeated it: “The president barely mentioned the federal deficit and didn’t talk at all about some of the other failures of his presidency: Central American policy, the Iran-contra affair, and the American hostages in Lebanon.”

On CBS This Morning the next day, co-host Harry Smith pressed his daughter Maureen Reagan about poverty: “He talked about being proud of what’s happened with the economy, about the millions of new jobs that have been created. And as I listened to that, I also thought one out of five babies born in the United States are born into poverty. There are hundreds of thousands of people in this country now that are homeless, have no place to live. I wonder, how does your father reconcile that in his mind? How does he reconcile those two things?”

That evening, CBS reporter Richard Threlkeld gave Reagan credit for one achievement, "peace abroad." As for the recovery, he argued "things are not nearly as prosperous as the president makes them sound," ludicrously claiming Carter was a better president: "on average, more new jobs were created every year under Jimmy Carter than Ronald Reagan."

Appearing on the CBS overnight news show Nightwatch with Charlie Rose the night after the speech, Laurence Barrett of Time magazine noted Reagan didn’t say much about the president-elect: “that would have prompted all of us to say ‘Hey, why didn’t he mention the horrendous problems he’s leaving George Bush.’ Reagan pumped a lot of electricity into the American system when it needed it. He’s leaving it to George to pay the electricity bill.” Barrett slammed Reagan as “the perpetrator of the great free-lunch illusion: that we could have all of these goodies and not pay the bill.”

That was then. This is now. Joe Klein of Time summarized Obama’s tenure: “There would be little melodrama and absolutely no hint of scandal during his time in office. The conservative fever swamps would be no less pustulent than they were during the Clinton presidency — indeed, the level of race-based hatemongering was frightening — but somehow the Obamas never let it get to them.”