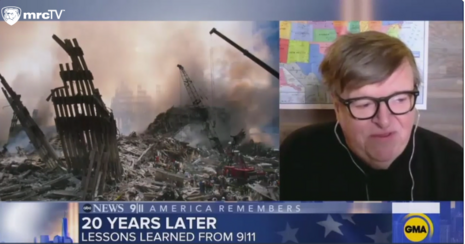 On Saturday morning's Good Morning America, ABC's Dan Harris allowed liberal propagandist Michael Moore to sully the 20th anniversary of the 9/11 attacks by falsely claiming that the George W. Bush administration gave Osama bin Laden's family a special pass to leave the country while all other planes were barred from flying.

This veteran ABC journalist, in particular, should have known enough to correct his guest's falsehoods since Harris himself actually debunked this and other such misinformation from Moore's Fahrenheit 9/11 film as it was released in 2004. In fact, Harris's report had included ABC News analyst and Bush critic Richard Clarke calling some of Moore's assertions "nuts" -- claims which the liberal film maker repeated in his Saturday interview without any challenge from Harris.

At 7:30 a.m., the ABC host bolstered the left-wing film maker in his introduction: "On the eve of the 20-year remembrance, Michael Moore hosted a free screening of his award-winning film Fahrenheit 9/11."

After playing a clip from the end of the film hinting that the motivations of politicians who wage war can never be trusted, Harris began by asking Moore if he thought the U.S. government has released enough information about the attacks.

The liberal guest aired his complaints, leading Harris to then tee him up to repeat some of his attacks on President Bush from Fahrenheit 9/11: "Do you think there was some potential desire to back off on Saudi Arabia because of oil or connections between individual members of the representative governments?"

Moore began his response with a thoroughly discredited falsehood:

But, back in October 2004, former CNN analyst Brooks Jackson -- then working for the Annenberg Public Policy Center's FactCheck.org -- published an impressive analysis pointing out that, according to the 9/11 Commission Report, Osama bin Laden's family members were not allowed to leave the country until September 20 -- a full week after the grounding of air traffic was lifted -- and were not allowed to leave until after the FBI had spoken with them and cleared them to leave.

And, on June 25, 2004, ABC's World News Tonight ran a report by Harris in which he informed viewers that Clarke took full responsibility for authorizing the bin Laden family members to leave.

Clarke -- a terrorism advisor for both Bill Clinton and George W. Bush who sharply criticized Bush after he left the White House and joined ABC News -- trashed some of Moore's other claims. Referring to Moore's attempts to impugn the family connections between the Bushes and the Saudi royal family, Clarke declared: "That's nuts. There was absolutely no connection between the Bush administration's failure to get around to terrorism prior to 9/11, and any family or financial ties to the Bush family might have had with Saudi Arabia."

But the ABC host made no such challenges to his liberal guest's credibility on Saturday morning, and merely followed up by asking for Moore's reaction to the Afghanistan pullout.

MSNBC also has notably had Moore on as a guest several times in the past two weeks as he was interviewed by Brian Williams, Alex Witt, Ari Melber and Al Sharpton. A week ago Sunday, Witt gushed over Moore and invited him to dinner.

This episode of ABC's Good Morning America was sponsored in part by Mattress Firm. Click on the link to let them know what you think.

DAN HARRIS: On the eve of the 20-year remembrance, Michael Moore hosted a free screening of his award-winning film Fahrenheit 9/11.

MICHAEL MOORE (audio from end of Fahrenheit 9/11): George Orwell once wrote that "It's not a matter of whether the war is not real or if it is -- victory is not possible. The war is not meant to be won. It is meant to be continuous."

HARRIS: And joining us now is the Oscar-winning filmmaker, and host of the podcast Rumble, Michael Moore. Michael, I apologize for mispronouncing the name of your film -- "Fahrenheit 9/11." Twenty years after your film, what do you think about how the government has gone about getting answers as to what happened and how it happened? And has the government been transparent enough in your view?

MOORE: No, I don't think so, and I think the families of the victims have been very right to demand that the documents from 9/11 be declassified. And last week, President Biden said that he would start the process of declassifying them. There's a lot we don't know -- 15 of the 19 hijackers are from Saudi Arabia. If 15 of the 19 hijackers had been from North Korea, I think it would have been okay for us to say North Korea has attacked the United States -- or if they had been from Cuba. But the fact that 15 of the 19 were from this one country and had training and else -- there's a lot we don't know, and I think when these documents are declassified, we're going to be able to get our hands on some truth.

HARRIS: Do you think there was some potential desire to back off on Saudi Arabia because of oil or connections between individual members of the representative governments?

MOORE: Well, as I pointed out in my film, yes, the Bush family and the Saudi royal family had very, very close ties. If you remember, Dan, in the day or two after 9/11 when all the planes were grounded, the only planes that were allowed to fly were the ones that picked up members of the bin Laden family who were living in the United States and members of the Saudi royal family. They were allowed to fly, and they were allowed to fly and leave the country. And, as the FBI person said in Fahrenheit 9/11, you know, any time that there's a murder -- and in this case a mass murder -- we always want to talk to the family, we always want to see what they know. That they wouldn't even let them stay so that the FBI could do their job to ask the questions -- and if you remember, it was another month before the Saudis allowed our FBI and our investigators into Saudi Arabia to interview the families of the hijackers -- to interview -- to try to get to the bottom of this.

There was not the cooperation from Saudi Arabia that we should have had. Two nights after 9/11, the Saudi ambassador to the United States, is having a private dinner with President Bush in the White House. These are all things that are in the 9/11 commission report, but there were so many documents that weren't allowed to be seen, and I think really should be seen what's there. And the families want closure to this -- that's why they're suing the Saudi government. There's a long-time suit going on here, and their own government should be helping them find the truth of what happened.

HARRIS: We have just about a minute left. I want to ask you about Afghanistan. You were really one of the loudest voices arguing against the launching of that war. Now that the war is over, what lessons, if any, do you think the country has learned?

UNIDENTIFIED MALE (from Fahrenheit 9/11): The FAA has taken the action to close all of the airports in the United States.

DAN HARRIS: It is one of the harshest criticisms in the movie.

MICHAEL MOORE (voiceover from Fahrenheit 9/11): All commercial and airline traffic was grounded.

We had some airplanes authorized at the highest levels of our government to fly to pick up Osama bin Laden's family members and others from Saudi Arabia and transport them out of the country.

HARRIS: But what filmmaker Michael Moore neglects to say is that those flights were green-lighted by the very same man that Moore uses to bash Bush in the movie, Richard Clarke, the former White House terrorism advisor.

RICHARD CLARKE, FORMER TERRORISM ADVISOR: I thought the flights were correct. The Saudis had reasonable fear that they might be the subject of vigilante attacks in the United States after 9/11. And there is no evidence even to this date that any of the people who left on those flights were people of interest to the FBI.

HARRIS: Also in the film, Moore hints that the Bush family's financial ties to the Saudis may have made him less vigilant before 9/11.

MOORE (voiceover from Fahrenheit 9/11): He's gone easy on the Saudi royals and bin Ladens, absolutely. They turned their head the other way, first of all, all the way leading up to 9/11.

CLARKE: That's nuts. There was absolutely no connection between the Bush administration's failure to get around to terrorism prior to 9/11, and any family or financial ties to the Bush family might have had with Saudi Arabia.

HARRIS: As one analyst said today, Moore has every right to express his view as long as viewers know that expecting fairness from Fahrenheit 9/11 is like expecting healthy food at the drive-thru window. Dan Harris, ABC News, Washington.

SCOTT SIMON, HOST: Those flights of Saudi nationals out of the United States, including members of the bin Laden family, that took place after air traffic was resumed, they were authorized by you. Is that correct?

RICHARD CLARKE, FORMER WHITE HOUSE TERRORISM ADVISOR: They were authorized by me after the FBI said it was all right with them.

SIMON: So you were -- you know, this is a major point in Michael Moore's film, Fahrenheit 9/11. You were interviewed at length for that film. Did you tell that to Mr. Moore in that film?

CLARKE: I wasn't interviewed for that film. What the Moore people did was take interviews that I gave on ABC News and just put them into the film. I've never met Moore or his people. And I think he's made a mountain out of a molehill with regard to the Saudis getting out of the country. As the commission report says, the FBI to this day has no desire to talk to those people who left the country on those flights. They knew a lot about them in advance, and they knew they had nothing to do with terrorism.