The Secular Media's Double Standard on 'Zero Tolerance' of Abuse

In the United States it would be unheard of for someone to be summoned to court to face a judge without knowing what the charges are and who the accusers are. But not in Australia. 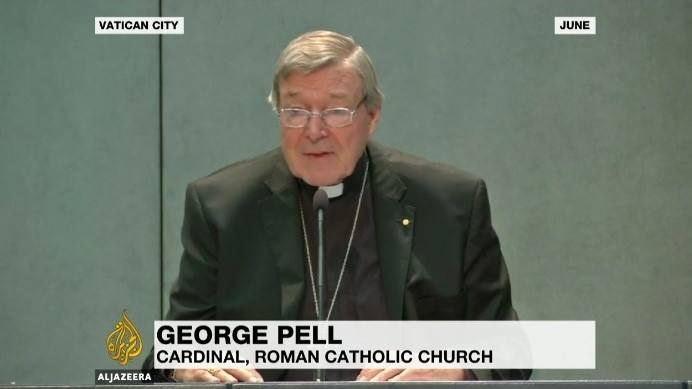 Cardinal George Pell was summoned to travel from Rome to Melbourne to appear in court today. He did. The proceedings, which were nothing more than a filing, lasted six minutes. Pell said nothing. Moreover, his lawyer did not enter a plea. That's because the mystery continues—Pell has not been told what he is being charged with or who his accusers are. All we learned is that he must appear again on October 6.

If this isn't bizarre enough, the prosecutor threatened the press with contempt of court if they dared to speculate on the case.

Here is what Andrew Tinney said to the media: "Any publication of material speculating about the strength or otherwise of the case, the prospect of a fair trial or trials being had, whether the accused should or should not have been charged, the likelihood of conviction or acquittal, or any other such matters would be in contempt of court."

If the Australian media had any guts, they would collectively violate this gag order and bring it before the courts. This kind of censorship is what we would expect from a Third World dictatorship, not a Western-style democracy.

The media sported their real colors again today. The New York Times posted a web story saying, "The case will test the credibility of Francis' efforts to foster greater accountability after abuse scandals have shaken the church around the world." Similarly, the Associated Press said, "For Francis, they are a threat to his credibility, given he famously promised a 'zero tolerance' policy for sex abuse in the church."

Cardinal Pell has never been convicted of covering up or abusing anyone, yet unspecified accusations made by anonymous accusers are enough to test the credibility of his boss for not holding him accountable? Accountable for what?

"Zero tolerance" is known as the "one-strike-and-you're-out" rule. There are no strikes—no convictions—against Cardinal Pell. Therefore, it is a moot issue. To say that the pope's credibility is on the line is to suggest that he should act now to discipline a man who is presumed innocent. The contempt for civil liberties could not be more clear.

I might add that supporting the newspaper's condemnation of "zero tolerance" in the schools was the executive director of the New York Civil Liberties Union, Donna Lieberman.

So if "zero tolerance" policies are flawed for the public schools, why are they suitable for the Catholic Church? More relevant, why are the media trying to pressure the pope to invoke this admittedly flawed policy against a man for whom it does not apply?