Serwer accused the GOP of "experimenting with voter suppression" so that "they have no longer have any need to respect the rights of their constituents." Bennett supportively read from his article and asked him to explain his hardline stance.

BENNETT: I want to draw you out on something that you wrote in this Atlantic piece, because you say this about Democratic voters:

"The targeted constituencies must treat every election cycle as though their fundamental rights are on the line, and then listen to Democratic leaders compare the voting restrictions targeting their right to the franchise as “the new Jim Crow,” and then watch those same leaders do nothing with the power they are given except tell them to simply out-organize those attempting to deprive them of their right to vote. This pattern cannot be repeated forever."

And I want to pick up there. Why not? Why can that pattern not be repeated forever, or else what would happen?

You could argue Bennett was close to exposing Serwer's thesis as a bunch of hysteria -- because if you vote in every election, your vote isn't being suppressed -- but Bennett was merely engaged in a softball pitch. 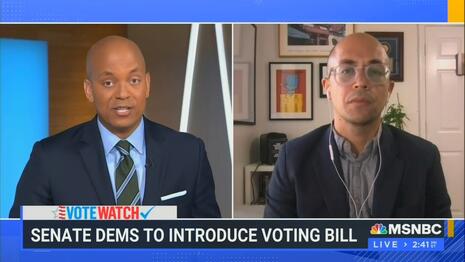 Serwer admitted that despite his harsh tone, "so far these restrictions have not been, as effective as a prior era of voting restrictions. They have not wiped out the black participation in the political process, the way that the restrictions did, the Jim Crow restrictions did after Reconstruction."

So Republicans aspire to Jim Crow tactics, but so far, blacks still vote.

Then Serwer slimed the right-leaning Supreme Court: "But as long as you allow these states to continue experimenting with voter suppression, eventually, they are going to find an effective way to suppress the votes of rival constituencies in a way that will pass the Supreme Court muster. In particular because of the conservative majority of the Supreme Court has taken a position that efforts to alleviate racism in voting are a greater evil than racism in voting."

After that utterly false description of the Court's recent rulings, Serwer continued his conspiracy theory that eventually Republicans will squash America's naturally occurring Democrat majority. "So it’s possible we’re not talking about next cycle or the cycle after that, but eventually these states will figure out a way to insulate their power from the Democratic constituencies so they don't have to answer to those constituencies or respect their rights. And that is a short circuiting of the democracy itself."

According to Serwer, this is because "If they can insulate themselves from public opinion using these devices, they have no longer have any need to respect the rights of their constituents."

Or maybe Serwer is just looking for monsters under the bed, because it's a great way to scare "marginalized communities" into voting for Democrats.

This segment was sponsored by Subway.