CNN Lectures Christian Florists in Georgia About 'Love' in the Bible 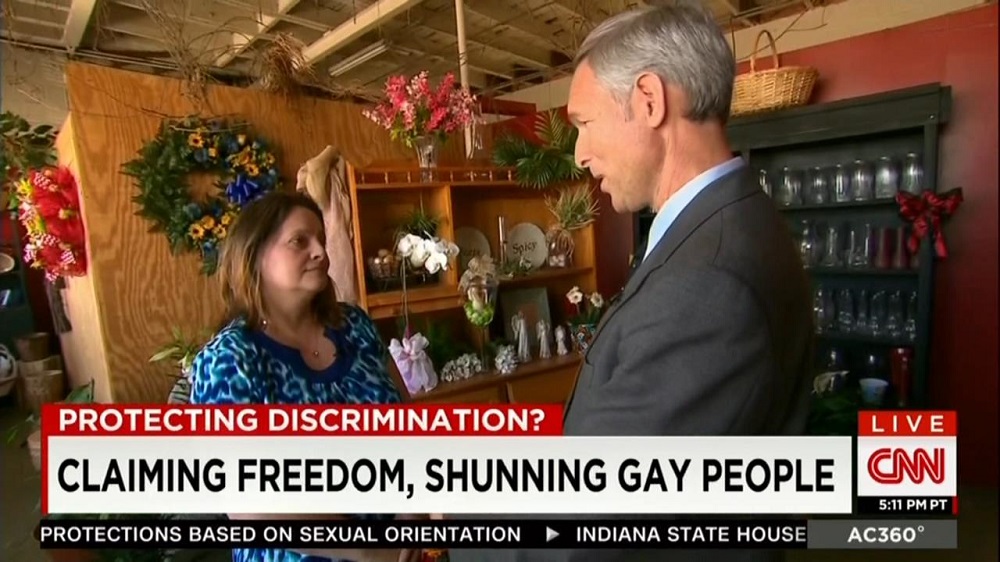 CNN's Gary Tuchman condescended towards Christian florists in rural Georgia on Wednesday's Anderson Cooper 360 over their religious-based stance against participating in homosexual "commitment ceremonies," as the state hasn't legalized same-sex "marriage" yet. Tuchman used the Bible as a club against two female employees: "The Bible talks an awful lot about love and loving your fellow man....You're not loving them if you don't want to serve them – right?"

The correspondent later cited how "in the Ten Commandments, it says you can't commit adultery – that you need to honor your father and mother." He then asked, "If someone didn't honor their parents or committed adultery, would you serve them?" When the woman answered she would, Tuchman replied, "Well, why would you serve them, but not serve someone who is gay?" Of course, he left the marriage context out of his follow-up question. [video below]

Tuchman ventured to Jeff Davis County, Georgia, a three-plus hour drive south of CNN's headquarters in Atlanta (and a possible attempt to tie the South's past support for slavery/segregation and their widespread cultural opposition to the left's social agenda). The correspondent played three extended clips from his interview of three flower shop employees – including a mother and son duo. He also played a soundbite from a left-wing activist from the Equality Georgia group.

The transcript of Gary Tuchman's report from Wednesday's Anderson Cooper 360 on CNN:

GARY TUCHMAN (voice-over): Head out to rural Jeff Davis County, Georgia, and you don't have to look hard to find supporters of the state's proposed Religious Freedom Restoration Act – and they aren't afraid to say why.

TUCHMAN (on-camera): If you had gay customers come in here to buy flowers, and they said, we want you to come to our commitment ceremony – bring the flowers – marriage is not allowed in the state yet – would you do it?

TUCHMAN (voice-over): Jennifer Williams is an associate at this flower shop – an observant Southern Baptist – who says she regards the Bible as the rule book for her life. She doesn't believe refusing service to a gay couple is discrimination.

TUCHMAN (on-camera): You talk about the Bible, and how important it is. I mean, the Bible talks an awful lot about love and loving your fellow man-

WILLIAMS: Right – and it doesn't mean that I love them any less, because I don't – I pray for them. I hope-

TUCHMAN: But if you don't serve them, it's not like you're-

TUCHMAN: But you're not loving them if you don't want to serve them – right?

WILLIAMS: Well, yeah – you can still love someone, I mean – even though you don't serve them.

TUCHMAN (voice-over): At another flower shop just down the street, the exact same opinions – from the florist and her son, who is studying to be a Southern Baptist pastor.

MELISSA JEFFCOAT, FLOWER SHOP EMPLOYEE: I would respectfully tell them that I'm sorry – that I just don't want to do it because of my beliefs.

TUCHMAN (on-camera): But right now – you know, while Georgia is considering a law to make that legal for you to do that, it is not, and you can get in trouble for doing that.

MELISSA JEFFCOAT: I understand that.

TUCHMAN: So you would be willing to take that risk?

MELISSA JEFFCOAT: Yeah. He died on the cross for me, so that's the least I can do for him.

CARLTON JEFFCOAT, SON OF FLOWER SHOP EMPLOYEE: I serve a God who's higher than any Supreme Court judge. He's called the judge of the universe. And I don't care what anybody else says.

TUCHMAN (off-camera): So, no matter what, whether it's a law or not, you would not bring your flowers to a gay commitment ceremony?

TUCHMAN (on-camera): There are five florists we found in this area. The employees of three of them did not want to appear on camera. But they all told us the same thing – that they want this law to pass in Georgia – that they want the right to turn away business from gay people.

TUCHMAN (voice-over) Their sentiments are, of course, very offensive to many – a demonstration taking place at the Georgia capital this week.

JEFF GRAHAM, EXECUTIVE DIRECTOR, GEORGIA EQUALITY: We now see that this bill is very clearly a vehicle to be used to discriminate against the gay and transgender community.

TUCHMAN: And although the flower shop employees we spoke to don't like to use the word 'discriminate,' they do indeed see the bill as a vehicle to legally deny service to gay people.

TUCHMAN (on-camera): You know, in the Ten Commandment, it says you can't commit adultery-

TUCHMAN: That you need to honor your father and mother. If someone didn't honor their parents or committed adultery, would you serve them?

TUCHMAN: Well, why would you serve them, but not serve someone who is gay?

MELISSA JEFFCOAT: It's just a different kind of sin to me, and I just don't believe in it.

TUCHMAN (voice-over): In these flower shops, they are happy to do business with you – but not so much if you tell them you're gay. Gary Tuchman, CNN, Jeff Davis County, Georgia.