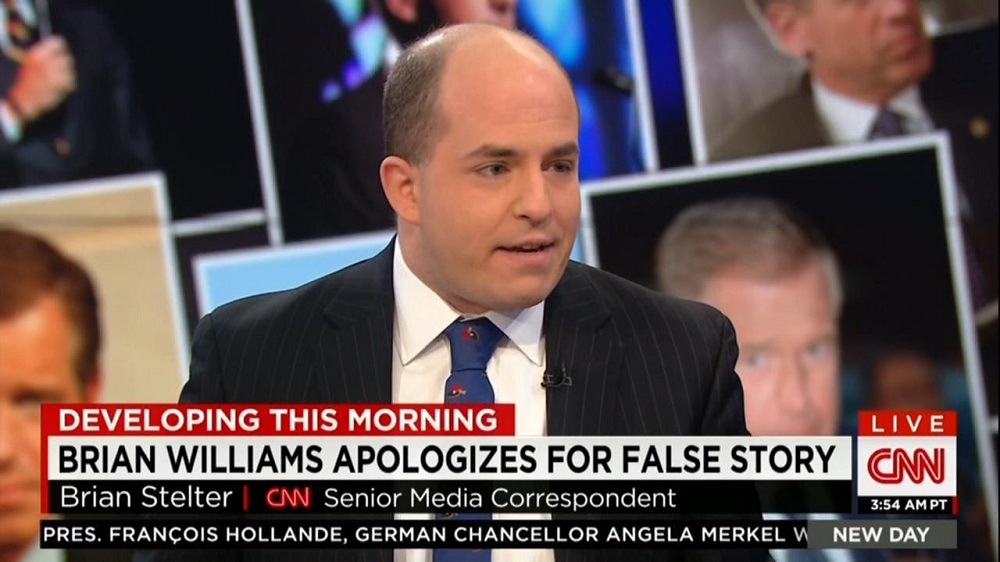 On Thursday's New Day, CNN's Brian Stelter contended that Brian Williams's false account about his helicopter coming under attack in Iraq in 2003 "just does not pass the smell test," and added that "this is a serious blow to [his] credibility." He also underlined that "all those times in the past where...the story got murkier over time – that seems like it was maybe intentional, and not just an innocent mistake." [video below]

Host Alisyn Camerota led the Stelter segment by pointing out the NBC anchor's changing story over the past 12 years: "We've looked back at the chronology of Brian Williams talking about this dramatic event. Back in 2003...he did not claim to be on the helicopter...he said he was on a chopper that was like 45 minutes behind that helicopter that was shot down. But then in 2007, the story started to morph – where he started to say, we were shot down. All of our helicopters took RPG's. Something happened."

The CNN correspondent replied by spotlighting Williams's 2013 appearance on CBS's Late Show where the false account came up:

BRIAN STELTER: Right. He became closer to the story. The story became murkier, and he became more involved in the story over time. And then, in 2013, on the David Letterman program on CBS, he talked as if it may have been his helicopter that had been hit by the RPG; and then last week, as we all just heard, very explicitly says that his helicopter was hit.

This just does not smell – pass the smell test. You know, you may want to believe this was an innocent mistake. But how could someone – how could anyone conflate being on a helicopter that did not take fire, and being on a helicopter that did take fire? It just – I understand why there's so many people scratching their heads this morning wondering, how in the heck did he get this wrong?

>>Flashback: The Worst of Brian Williams: Marking His 10 Years of Liberalism as Anchor of NBC Nightly News<<

Stelter and co-host Michaela Pereira continued by giving the NBC journalist some benefit of the doubt. However, he did repeat his main point, and gave his "maybe intentional" line about the controversy:

MICHAELA PEREIRA: He's saying, in his apology, he blames, sort of, a foggy memory – and granted, 2003 is a long time ago.

STELTER: And there is a fog of war. We all know that phrase.

STELTER: Well, I think – I think the issue now is all those times in the past where, as you're saying, the story got murkier over time. That seems like it was maybe intentional, and not just an innocent mistake.

And the big question, I think, now on the table – what Williams did not address on air last night – is, really, how far he was away? Because if it is true, as Stars and Stripes newspaper has reported; as some of the soldiers have reported, that – that his chopper was about an hour away, well then, why was he describing as if he was in the formation of four helicopters where this RPG attack happened?

Co-anchor Chris Cuomo, however, wasn't willing to give Williams any room for error:

CUOMO: ...I don't know why you guys bring up the 'fog of war.' I don't think it applies....He's never mentioned the fog of war-

PEREIRA: But the fog of memory is what I'm talking about, because things can get murky....

CUOMO: I don't know – I think memory is either right or it is wrong. We're in the business of being right. But I mean, I also think you have to look at – well, how big a deal is this? And that goes to the apology. Did he bring it out in a sufficient way? Did he apologize in the right way? How much does this matter? Because my concern is, you got a guy who's been doing this job for a long time at a high level. I don't know him. He's not a friend of mine – all right? So this isn't about protecting the collective. If anything, I feel opposite about the media in general. But you know what's going to happen: they are starting to eat him alive. And I can understand being protective of one's self in that situation.

STELTER: Well, you say 'they.' I would say people like me are now looking at that chronology and try to figure out-

Later in the segment, Stelter asserted that Williams's apology on Wednesday's NBC Nightly News wasn't enough, and concluded with his "serious blow" phrase:

STELTER: ...[F]olks are saying this is a lie, and I understand why they are saying that. In fact, some of the soldiers on Facebook were calling him a liar, and they were saying that they've been trying to raise red flags about this for years.

That's what's so notable, I think, about this story. We sat here a couple of weeks ago talking about a big media story of the time. I said what's great about the Internet is the power of accountability. Consumers can now hold powerful news anchors accountable. Well, that's exactly what's happening here. These soldiers spoke up on Facebook, and that's what triggered all this reporting this week; and now, this apology. But I don't think this apology went far enough, because he's not explaining the rest of what happened.

BRIAN WILLIAMS, ANCHOR, NBC NIGHTLY NEWS (from NBC Nightly News): I want to apologize. I said I was traveling in an aircraft that was hit by RPG fire. I was, instead, in a following aircraft. We all landed after the ground fire incident, and spent two harrowing nights in a sandstorm in the Iraq desert. This was a bungled attempt by me to thank one special veteran; and, by extension, our brave military men and women – veterans everywhere – those who have served, while I did not. I hope they know they have my greatest respect; and also now, my apology.

CAMEROTA: What's wrong with that apology?

STELTER: He addressed what he said on air last week, but didn't address these other cases – like on the Dave Letterman show in 2013. So, I think it was – it was a halfway measure, and it wasn't going all the way. And he is not addressing why people are saying he is lying about this, as opposed to making a mistake. You know, 60 seconds on the Nightly News is probably not going to be enough here to fully address this.

And we should say, as you said, Chris, one of the most important news anchors in our country –  the single most-watched news anchor in our country. Trust and credibility is key here. Brian Williams has a lot of it. He has earned it over so many years. But this is a serious blow to that credibility.

CAMEROTA: Brian Stelter, thanks so much.