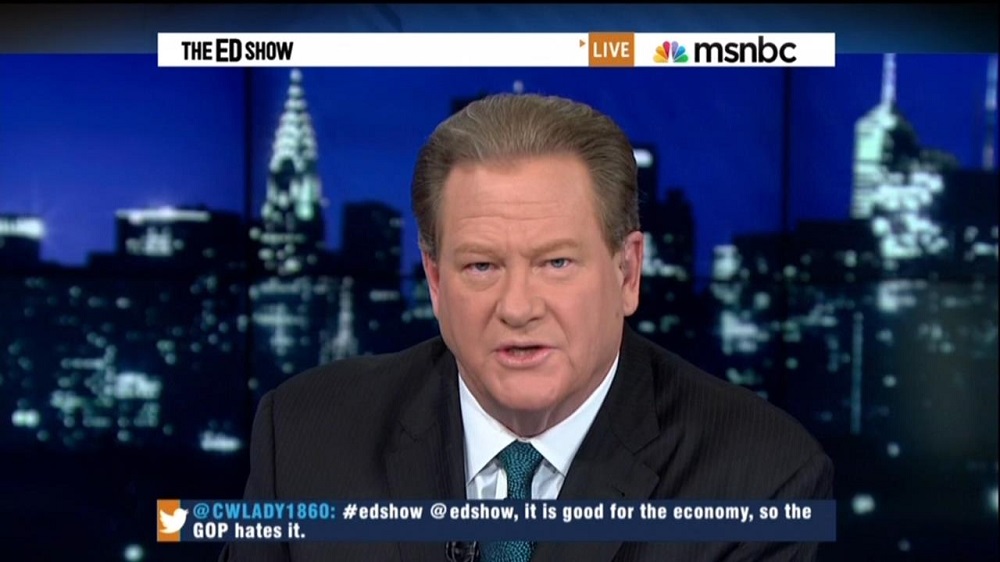 Ed Schultz one-upped colleague Chuck Todd on his MSNBC program on Wednesday. Hours after Todd likened President Obama's policy announcement on Cuba to the fall of the Berlin Wall, Schultz compared the Democrat's address to a famous 1987 speech given at the Wall by his predecessor, Ronald Reagan: "Isn't this Barack Obama's 'tear down this wall, Mr. Castro' – that kind of a moment? I mean, if change can take place with the Soviet Union, why can't it take place with the Cuban people here?" [video below]

Moments before Schultz made this beyond bizarre statement, guest Henry Fernandez of the left-wing Center for American Progress Action Fund acted as a cheerleader for the President's move:

ED SCHULTZ: Considering the atrocities that we had with other countries in times of conflict, Mr. Fernandez, why can't some Cuban-Americans put this behind them, and view this as a new opportunity of change, and – and give it a – a somewhat of a ray of hope for a better life for Cubans in Cuba?

HENRY FERNANDEZ, CAP ACTION FUND: Well, I think, actually, as E.J. [Dionne] noted, we are seeing this big generational shift. And so, what's amazing is, really, how many people are very excited about this – how many Cuban-Americans are excited. This is very much a – a pro-family effort by the President, if you think of it that way, because this is going to allow for more travel by American Cubans – Cuban-Americans down to – to Cuba. It's going to allow folks to be able to do things, like help their family members buy dishwashers, refrigerators – the basics of being able to – to live a good life. So, I actually think, when we look at polling in – in Florida; when we look at polling across the country, this is popular with all folks. It's – particularly popular with Latinos, and it's increasingly popular with Cubans, especially younger Cubans.

Fernandez continued to sing the chief executives praises after the MSNBC host made his "tear down this wall" reference:

SCHULTZ: Which is the best highway to convincing people, as I think – totally different from what we've had over the last 54 years. What do you make of it?

FERNANDEZ: That – that's exactly right....This is – this is about the things that America will bring to Cuba. We're – we're so much larger, as a country – people are going to be going there on tourism. We're going to see opening up of Internet access. We've seen over 50 people released – or going to be released, or in the process of being released from – from Cuban prisons. This is really an opening up. And I have to say, if anyone thought that President Obama, after – after the election, was going to go into a shell – wow! He has made, just, huge steps with immigration reform; and now, with this. This is – this is exciting times from this presidency.