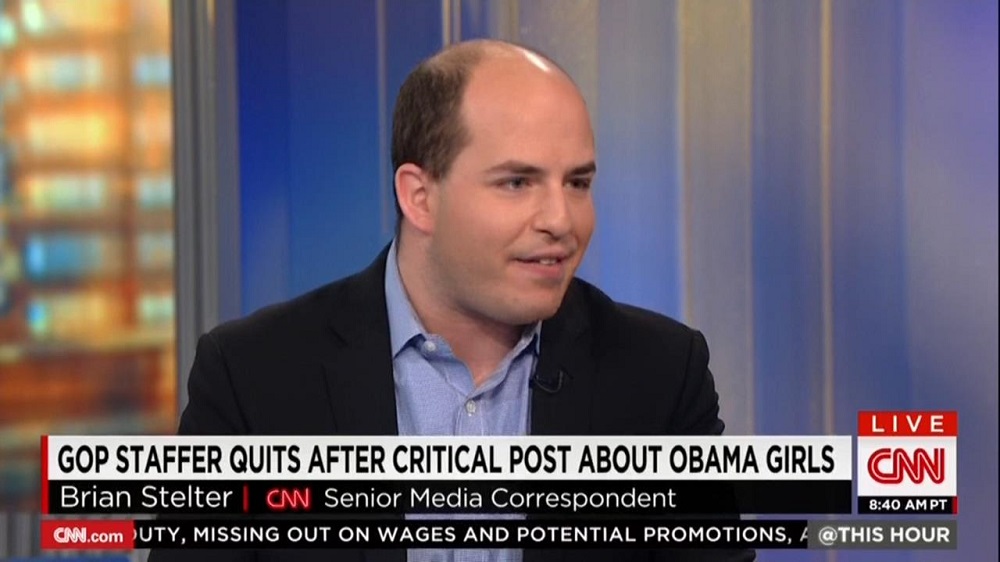 On Monday's At This Hour, CNN's Brian Stelter brushed aside a regular conservative critique about the media – that the press has a double standard about covering controversial remarks from Republican/conservative officials, while ignoring similar comments from Democrats/liberals. Stelter, replying to a Republican flack's attack on the news coverage of GOP staffer Elizabeth Lauten's critique of the Obama daughters, asserted that "this was about a slow news cycle. There was...a void of stuff to talk about over the weekend....So, I think that has a lot to do with it." [video below]

Host Michaela Pereira later used the same term that many of Lauten's critics were using to label her post about the Obama children:

MICHAELA PEREIRA: ...The fact is, we're talking about this in a time where there is an active effort to counter cyber-bullying. And that's essentially what this comes down to. These are two teenaged girls; this is a woman – I don't know how old she is – but she's a grown-up, who takes to Facebook – which is generally a medium of the younger generation – and is setting quite a terrible example by, essentially, just being mean.

On Sunday's Good Morning America, ABC correspondent Gloria Riviera touted how "Lauten is in the hot seat this morning, accused of cyber-bullying Sasha and Malia Obama."

Pereira and co-host John Berman brought on Stelter for a discussion segment on the Lauten controversy. The female anchor noted how "everybody has, sort of, come out and said this is just – it's unacceptable what she said, and wondered, "Has the GOP responded, though?" The Reliable Sources host replied by zeroing in on RNC spokesman Sean Spicer's response to the issue:

BRIAN STELTER: There has been some response, and I was really interested in what Sean Spicer, the head of the RNC – the Republican National Committee's P.R. operation said yesterday. He rebuked what Elizabeth Lauten said. But then, he also said this – and we can put it up on screen: 'While the comments were inappropriate and insensitive, the mainstream media's coverage of this story is appalling. In over 20 years in politics, I have never seen one of the countless inappropriate comments by Democrats ever covered to a fraction of this.'

Stelter also disclosed that "Sean and I have debated this before about whether Republicans who say foolish things or insensitive things get more attention than Democrats. I think, sometimes, he's right; sometimes, he's wrong." However, he didn't address the communication director's claim that the "countless inappropriate comments by Democrats [were] ever covered to a fraction of this."

The CNN personality gave his "slow news cycle" answer when Pereira followed up by asking, "So, it's our fault?" Stelter, along with Berman, did acknowledge one component of Spicer's slam of the media:

STELTER: ...I do think there's something to be said, though, for the fact that this was a relatively obscure woman. This wasn't John Boehner's chief of staff or something-

BERMAN: It's not like Mitch McConnell was saying this. It's the communications director for a congressman that most people – many people outside of Tennessee haven't heard of.

STELTER: No. I mispronounced his name the first time I said the guy's name on TV over the weekend.

You know, this Facebook post she put up on Thanksgiving was barely even noticed until an African-American website, The Root, noticed it; wrote about it; and then, it went viral. So, you know, it doesn't – it doesn't explain away the comments-

BERMAN: It doesn't make it okay what she said-

STELTER: But it puts them into context.