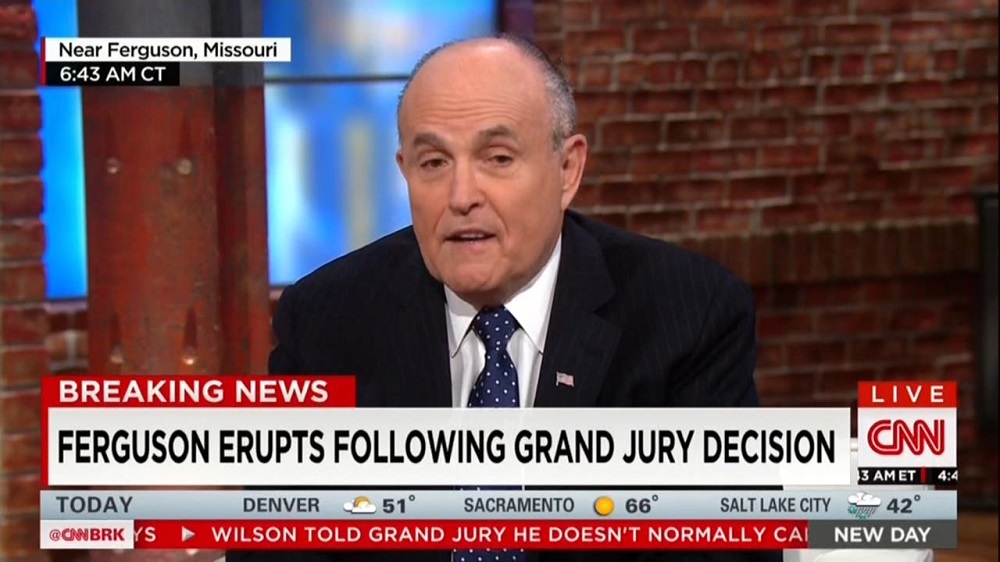 Rudy Giuliani fired back at Michael Eric Dyson on CNN's New Day on Tuesday for the MSNBC analyst's "white supremacy" attack on the former New York City mayor. When anchor Alisyn Camerota raised Giuliani's supposedly "controversial comments" from Sunday's Meet the Press on NBC, the former Republican politician underlined that he had "said the same thing the President of the United States said, and I was accused of being a racist." [MP3 audio available here; video below]

Giuliani continued by paraphrasing President Obama's Monday night speech, where the Democrat asserted that "nobody needs good policing more than poor communities with higher crime rates." The one-time mayor added, "When he [Obama] said it, he wasn't accused of being a racist. When I said it, my adversary [Dyson] said I was a racist."

Camerota brought on the former New York City executive for his reaction to the rioting and looting that took place after a grand jury decided to not indict Darren Wilson for his shooting of Michael Brown. The CNN journalist first asked Giuliani if law enforcement "officials in Ferguson were prepared for what happened last night." The guest replied, in part, "obviously not," and outlined why he thought the situation in the Missouri municipality escalated so quickly that night.

The anchor followed up by asking, "Would you have had your police to use tear gas on the protesters?" Giuiliani didn't give a direct answer, but indicated he would have. He also stated that the grand jury made the right decision. Cameorta then asked him to explain his reasoning:

RUDY GIULIANI, FORMER MAYOR OF NEW YORK: I would have had them do anything necessary to stop them. My concern now – last night, my concern was for the Brown family. I feel terrible for them. I believe it was a correct verdict. In fact, I think it was the only verdict the grand jury could reach-

GIULIANI: I'm going to tell you why: as a prosecutor, you couldn't possibly have won that case. One of the things – I was a United States attorney – you know, for 11 years. You consider two things when you decide an indictment: one, do you have probable cause? I don't think there's any question – they didn't have probable cause. But past that, number two, can you win this case at trial? They would have been destroyed at trial by a halfway-competent defense lawyer, because of all the inconsistencies. And frankly, the prosecutor was generous – because of all the perjury that was committed by witnesses, whose testimony was contradicted by physical evidence; and whose testimony is contradicted by themselves. There were several witnesses, who gave three different versions – including under – under oath. So, you could never have won this case.

This riot you see today would have taken place six months from now when the officer was acquitted by a jury. If you can't prove probable cause, how are you going to prove it beyond a reasonable doubt when the witnesses are contradicting themselves?

Camerota brought up Giuliani's exchange with Dyson later in the segment. After the former mayor shot back at the MSNBC pundit and outlined his case, the CNN personality wondered if the situation might have ended different had Wilson had closer ties to the Ferguson community:

ALISYN CAMEROTA: ...Mr. Mayor, I want to ask you about some controversial comments that you made on Meet the Press over the weekend. You seem to be suggesting that the real focus here should be black-on-black violence, and...that white cops wouldn't have to go into black communities if black communities could, sort of, better police themselves.

The point is this: in New York City, the way you determine where we put our police is non-racially. We determine it by the numbers. If there are large amounts of crime in this community, we put more police there. If we didn't do that, we would be racist. If I put all my police on Park Avenue, and none of my police – where five times more crime is taking place, then I'd be accused of being a racist. The police follow where the crime is committed. And this is possibly because of our history of racism – possibly because of social problems; other problems that we're not dealing with – but the amount of crime in the black community is excessive. Seventy to seventy-five percent of the murders in New York City are committed by blacks. Now, I don't say that out of any racial motivation. I say that as a factual statement, and as a plea – please, do something about that.

When the President was talking last night about training the police – of course, the police should be trained. He also should have spent 15 minutes on – training the community to stop killing each other in numbers that are incredible, incredible. Ninety-three percent of blacks are shot by other blacks. They are killing each other. And the racial arsonists, who enjoyed last night, this was their day of glory. The racial arsonists – they don't talk about that. When do you hear them talk about how do we really reduce crime? What are the causes? What about family problems? How do we solve them?

CAMEROTA: ...[W]ouldn't it also help to have police officers who know the community? Whereas, Darren Wilson didn't know Ferguson – he wasn't from Ferguson. Wouldn't that help?

I think – I think this is a situation in which people have to stop committing so much crime. If you commit 75 percent of the murders in a city, 75 percent of your police presence is going to be concentrated on you.

Giuliani repeated his point about black crime near the end of the interview, after co-host Chris Cuomo asked him for his advice to community leaders in Ferguson:

CHRIS CUOMO: ...[W]e have an urgency in front of us. There are a lot of big issues about why crime exists. We know that blacks kill blacks; we know that whites kill whites, and we've known this for a long time, and we know that those root causes have to be dealt with. But that's not going to happen today. What is your advice for the leaders in this community for how they avoid what happened last night?

The way it should be dealt with, is the community should get together. The clergy should be brought in; everyone should be brought in. The police should be doubled or tripled for tonight. The first person – the first person that commits a crime – hurts property, hurts a person, tries to loot a store – should be arrested immediately by a large number of police that completely overwhelm them. And all of those public officials should say – look, it's not going to happen. You're not going to riot. You're going to go to jail. You're going to be arrested – no cooling off period – no acceptance of a little bit of violence. A little bit of violence leads to more violence, and then, it gets out of control. And I'm – I'm not just telling you this. These are – this is – this is the wisdom that emerged from the report that was done in the Crown Heights riot, and I followed that as mayor of New York City. And one thing I never had was a riot.