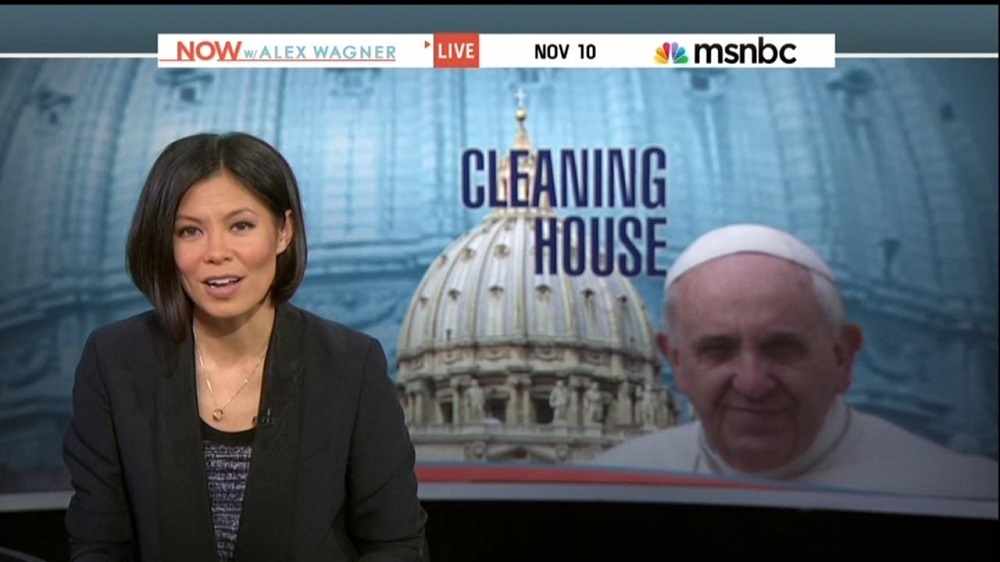 Alex Wagner was noticeably gleeful on her MSNBC program on Monday about Pope Francis reassigning Cardinal Raymond Burke from a prominent role at the Vatican to patron of the Knights of Malta. Wagner hyped this move as "a strong message to arch-conservatives in the Catholic Church – reform or be removed." The left-wing host later underlined that the pontiff "demoted hardline U.S. Cardinal Raymond Burke," and this was supposedly a "clear message to his [Francis's] conservative critics."

Wagner soon added that "the Vatican's announcement comes just days after Pope Francis excommunicated an Argentine priest who admitted to sexually abusing four teenagers" – with the implication that Cardinal Burke's demotion is somehow equivalent to the punishment of a sex abuser.

The MSNBC host previewed her commentary segment about Cardinal Burke with her "strong message to arch-conservatives" line. She led it with a quote from Pope Francis: "'God is not afraid of new things.' Thus spoke Pope Francis last month; and yesterday, he sought to prove it true." She continued with her "clear message to his conservative critics" claim, and zeroed in on apparent "arch-conservative" quotes from the American prelate:

ALEX WAGNER: ...[T]he controversial cardinal apparently criticized the Pope – telling a Spanish Catholic magazine, 'Many have expressed their concerns to me. There is a strong sense that the Church is like a ship without a rudder.' For some context here, Burke has called the Democratic Party 'the party of death,' and he advocates denying Communion to Catholic politicians who support abortion services. Just last month, he called gay relationships 'profoundly disordered and harmful.'

After spotlighting the Argentinian pontiff's move against his depraved countryman, Wagner quoted from an analysis on the current situation inside the Catholic by a priest at the Catholic University of America: "As Catholic University Reverend Paul Sullins put it, 'The conservatives had it all their way for about thirty years. And now, the shoe just might be on the other foot.'" Of course, the on-air personality glossed over Pope Francis's condemnations of abortion and defended the Church's dogma that marriage is between one man and one woman.

This isn't the first time that Wagner has expressed hope that the Catholic Church would move towards the left. In February 2013, after Pope Emeritus Benedict XVI announced that he was abdicating, the MSNBC leftist wondered if "we can look forward to a slightly more progressive Catholic doctrine going forward."