CNN's Costello Plays Up GOP's 'Campaign of Fear' in Midterms 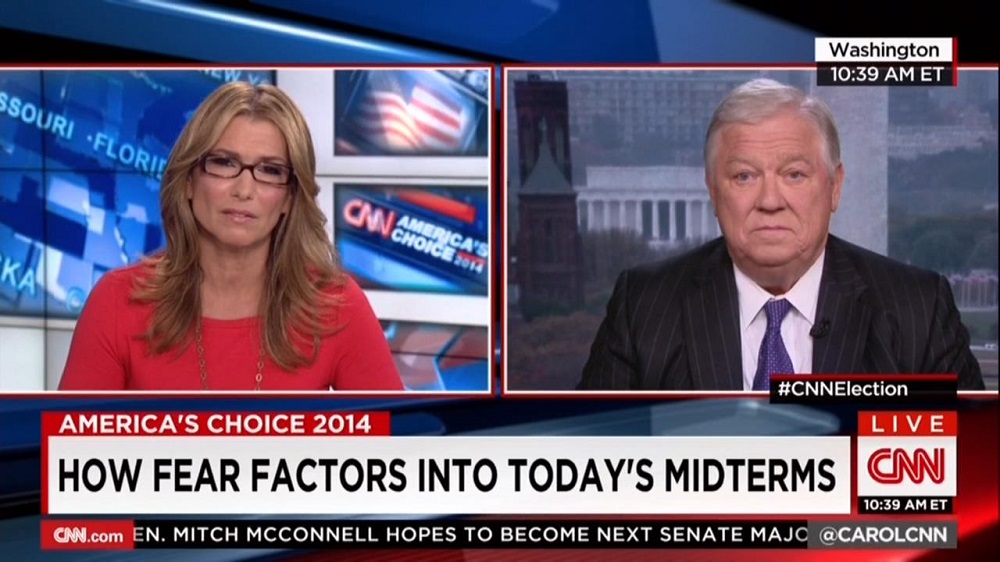 CNN's Carol Costello hyped how "Republicans have managed to use fear so successfully in these midterm elections" during interviews of two former governors on Tuesday's CNN Newsroom. During a segment with Democrat Bill Richardson, Costello lamented that Democrats are "not talking about President Obama's more positive accomplishments in office," and asserted that "those things are certainly overshadowed by the anxiety that voters feel about ISIS and Ebola."

The anchor also underlined that "fear is a powerful motivator, and it is the President's job to calm those anxieties." Minutes later, during an interview of Haley Barbour, Costello contended that "Republicans may be on the verge of winning Senate control – thanks, in large part, to a campaign of fear. If you examine the political ads that many Republican candidates have put out, they don't extol ideas – but Democrats say they do exploit fear." She hounded the Republican politician about ISIS, Ebola, and the economy: [videos from Richardson and Barbour inteviews below]

HALEY BARBOUR (R), FORMER MISSISSIPPI GOVERNOR: ...A lot more people have quit looking for a job than have actually gotten a job. We've got three million Americans who now have part-time jobs that had full-time jobs. We have a record number of Americans who – adult Americans – who are working part-time, and only less than 48 percent of Americans have a full-time job. That's why per – what's why family incomes today are four percent below where they were when the recession ended, and seven percent below where they were in 2007-

COSTELLO: Well, there is no doubt-

COSTELLO: But that's not – but that's not what these Republican candidates are mentioning in their ads. They're focusing on ISIS and Ebola. They're not talking about the economy and ways to fix it.

BARBOUR: Well, now let's be fair. This campaign has been going on all year, and huge amounts of money has been spent on economic growth; on job creation; on energy policy; on tax policy. These Ebola ads have only happened recently because this – the public only became focused on the issues. And, very frankly, every candidate should be talking about, in his campaign, what is on the minds of the families when they sit around the kitchen table or the dinner table. And that's what you have seen – the evolution toward the ads about ISIS and Ebola-

COSTELLO: But – but if you look-

BARBOUR: Because it's gotten to be a real problem for Americans-

COSTELLO: If you look at public opinion polls on Ebola, people aren't really afraid of Ebola. I mean, they're concerned about it, as they should be, but they're not afraid their neighbor is going to get Ebola, and bring it in their homes.

BARBOUR: Well, 80 percent of the people in Maine agreed with Governor [Paul] LePage, when he said a person up there that had had Ebola needed to be quarantined. Are they worried that their next-door neighbor is going to get it? You're probably right-

COSTELLO: And a – and a judge ruled against him-

BARBOUR: But they are very worried that this strain is going to run wild in the United States, as it is doing in West Africa. And they absolutely believe that the government should do more about it, and should be very, very aggressive in trying to make sure this never gets loose in the United States.

COSTELLO: Well, do you really think there's going to be a huge Ebola crisis in the United States like there is in West Africa?

BARBOUR: Well, ma'am, I believe the American people think it's the role of the government to make sure there's not. And they don't see the government playing that role aggressively enough.

COSTELLO: But if the government – and I guess by that, I would mean President Obama – because he said it, right? He says there's not going to be a big Ebola crisis here, like there is in West Africa. And if you look at things as they stand right now, he appears to be right.

We do have the resources, unquestionably, to prevent this from getting out of control in the U.S., but we have to be aggressive. Why would we quarantine U.S. soldiers, who go to Africa to try to help and are not exposed to any Ebola patients – why do we quarantine them, but we don't quarantine people who have been exposed to Ebola patients from West Africa when they come into the United States? The American people don't get that.

Earlier in the interview, the CNN anchor played a clip from Republican Senate candidate Scott Brown's ad in New Hampshire and asked Barbour, "The thing that stands out in Scott Brown's ad is that he offers no new way to deal with ISIS. He only says the Democrats have it wrong. Is that fair?" The former RNC chair answered, in part, that "the administration didn't take seriously at all – in fact, two issues: Ebola and ISIS. And now, we've got a real problem....He's not out attacking somebody's character. But he's saying something the American people know is right: these policies have failed. They were not the right policies, and we need better results."

When Costello retorted that Americans supposedly were "not quite clear on what Republicans plan to do about these problems, once they get into office," Barbour took a jab at the media's lack of coverage regarding Senate Majority Leader Harry Reid's blocking of House Republicans' proposals:

BARBOUR: Well, one of the reasons, of course, is that the news media – and I don't say this in a pejorative way – the news media doesn't cover that the House of Representatives has passed literally hundreds of bills and sent them the Senate, where Senator [Harry] Reid won't let them come up for a vote. Now, the press doesn't cover that, because they say these bill doesn't have a chance of becoming law, with the Senate not considering them.

During her earlier interview of Richardson (whom she didn't repeatedly interrupt, as she did with Barbour), the CNN journalist actually wondered why President Obama wasn't taking a larger role in the midterm election. She also listed the Democrat's apparent accomplishments (which included an accompanying graphic):

COSTELLO: What happened to the great communicator of 2008?

BILL RICHARDSON, (D), FORMER NEW MEXICO GOVERNOR: You know, Carol, historically, in midterm elections – off-year elections –  presidents are not as strong as they have been. And this president, I believe, has done a good job, but he's been a victim of the Ebola crisis; explosions in the Middle East; the dysfunction in Washington. So, voters, kind of, blame the person at the top.

Now, I think Democrats have made a mistake in not embracing the President, when it comes to the motivation of their own base....when you distance yourself from the President, who is the strongest with the base that needs to turn out...I think you're making a mistake, and I dread what a lot of Democrats are doing – distancing themselves...from the President; from his policies; from an economy that, for instance, has been improving. Unemployment is down; six months of economic growth – you see some very positive signs –  deficit down. But Democrats aren't talking about it. I think it's been a classic mistake.

COSTELLO: No, they're not talking about President Obama's more positive accomplishments in office. You know, a political risk management firm had a theory. It told the Washington Post this – quote, 'Bush is a leader who didn't like to think;' while 'Obama is a thinker who doesn't like to lead.' Is there something to that?

RICHARDSON: Well, I think the President has his own style. But, at the same time, the party – the Democratic Party – needs to be pushing a positive agenda. I've never seen voters so sour – so negative in this election. They're not voting for Republicans; they're not voting for Democrats. They're voting against the status quo that they're very unhappy about, and neither party has put forth a positive vision. The Republicans – down with President Obama and his policies; Democrats distancing themselves from the President, but not proposing what we would do in a positive way – an improving economy; more emphasis on education.

Look internationally – I think this has been a big factor. The explosions in the Middle East – you can't blame the President for it. But you can say that with the ISIS issue, he's assembled a coalition of over 60 countries – it's an international effort; we're getting out of Iraq and Afghanistan, we're putting our resources back home. So, it's a very complicated election. I've never seen anything like it. And I think voters are not voting for any party in particular.

COSTELLO: Well – no, they're not, because – but because, as you said, there are things for Mr. Obama to brag about – and the examples are, gas prices down below $3 a gallon for the first time in years. We have the lowest national unemployment rate in six years. The stock market is at record highs. Ten million are now enrolled in ObamaCare. But those things are certainly overshadowed by the anxiety that voters feel about ISIS and Ebola. Fear is a powerful motivator, and it is the President's job to calm those anxieties. And isn't that a reason that Republicans have managed to use fear so successfully in these midterm elections?

RICHARDSON: Well, Carol, I think what you're going to see, if there is a Republican victory – I think it's going to be a deadlock in the Senate; and the governors, I think it also [will] be a wash. But what Republicans are going to recognize is maybe, they have short-term gains this year in this election 2014. But in the presidential election in two years, they're going to be doomed by their negative efforts on immigration; against minorities; Hispanics – against women. Maybe, it's a short-term gain today, but long term, they're going to be in trouble in a national election, because their base – their Tea Party base is so narrow.