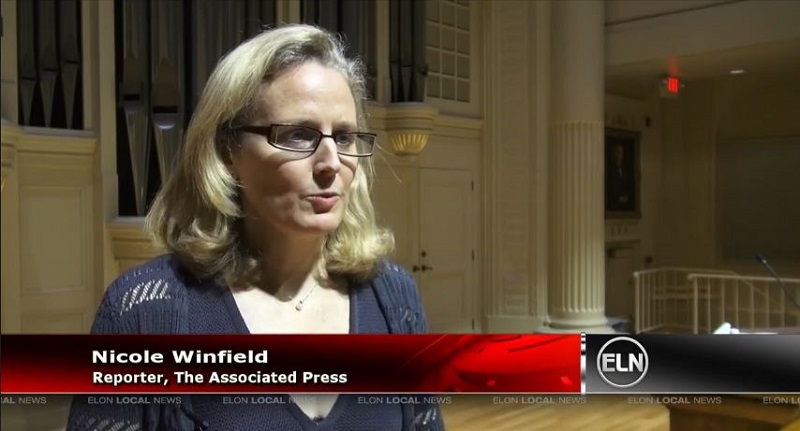 [Update, Tuesday, 5:35 pm: Winfield directly lifted the "seismic shift" term from a press release of the Human Rights Campaign  –  something the Big Three networks also did during their Tuesday morning newscasts.]

Nicole Winfield unsurprisingly slanted toward left-wing LGBT groups in her Monday article about the mid-term report of the Catholic bishops' synod on the family currently underway at the Vatican. Winfield played up how "gay rights groups hailed a 'seismic shift' by the Catholic Church toward gays on Monday after bishops said homosexuals had gifts to offer the church," and front-loaded three straight quotes from members of two such groups, along with a sympathizer.

It took the AP correspondent five paragraphs to acknowledge how "conservative groups denounced the report as heresy and a 'betrayal,'" and didn't quote from a conservative until fifteen paragraphs into her article. She also failed to give an ideological label to the LGBT activists/groups that she cited.

Winfield led with her "seismic shift" term in her article, "Catholic bishops in 'seismic' opening toward gays." She continued by underling that the document stated that "their partnerships, while morally problematic, provided homosexuals with 'precious' support," and that the "church must recognize the 'positive' aspects of civil unions and even Catholics who cohabitate, with the aim of bringing them to a lifelong commitment in a church wedding." The journalist soon added that "the tone of the report was one of almost-revolutionary acceptance rather than condemnation."

"For the LGBT Catholics in the United States and around the world, this new document is a light in the darkness — a dramatic new tone from a church hierarchy that has long denied the very existence of committed and loving gay and lesbian partnerships," said Chad Griffin, president of Human Rights Campaign, the biggest LGBT rights organization in the U.S.

In the following paragraph, Winfield did reference how "Francis decided late Friday to add six progressives from four continents to the synod leadership to help prepare the final document after several conservatives were elected to leadership positions. None of Francis' appointees were Africans, who are traditionally among the most conservative on family issues." But she didn't identify Griffin as a "progressive," and continued this omission in the rest of her piece when she quoted from Rev. James Martin (whom she identified as "Jesuit author") and Francis DeBernardo ("executive director of New Ways Ministry, a Catholic gay rights group"):

The bishops said gays had "gifts and qualities" to offer and asked rhetorically if the church was ready to provide them a welcoming place, "accepting and valuing their sexual orientation without compromising Catholic doctrine on the family and matrimony."

For a 2,000-year-old institution that teaches that gay sex is "intrinsically disordered," even posing the question was significant.

"This is a stunning change in the way the Catholic church speaks of gay people," said the Rev. James Martin, a Jesuit author. "The Synod is clearly listening to the complex, real-life experiences of Catholics around the world, and seeking to address them with mercy, as Jesus did."

...Francis DeBernardo, executive director of New Ways Ministry, a Catholic gay rights group said that though the report repeats doctrine about gay marriage, "the move toward accepting and valuing the gifts of gay and lesbian people is a major step forward."

While the AP correspondent cherry-picked the parts of the report favorable to the LGBT activists, and mentioned in passing that "the bishops repeated that gay marriage was off the table," she didn't explicitly excerpt that specific part of the document:

...The Church furthermore affirms that unions between people of the same sex cannot be considered on the same footing as matrimony between man and woman. Nor is it acceptable that pressure be brought to bear on pastors or that international bodies make financial aid dependent on the introduction of regulations inspired by gender ideology.

By contrast, CNN correspondent Delia Gallagher did quote that section of the mid-term report in her Monday article on her network's website (Gallagher also included quotes from Fr. Martin).

Winfield finally cited some "conservatives" after the quote from DeBernardo: