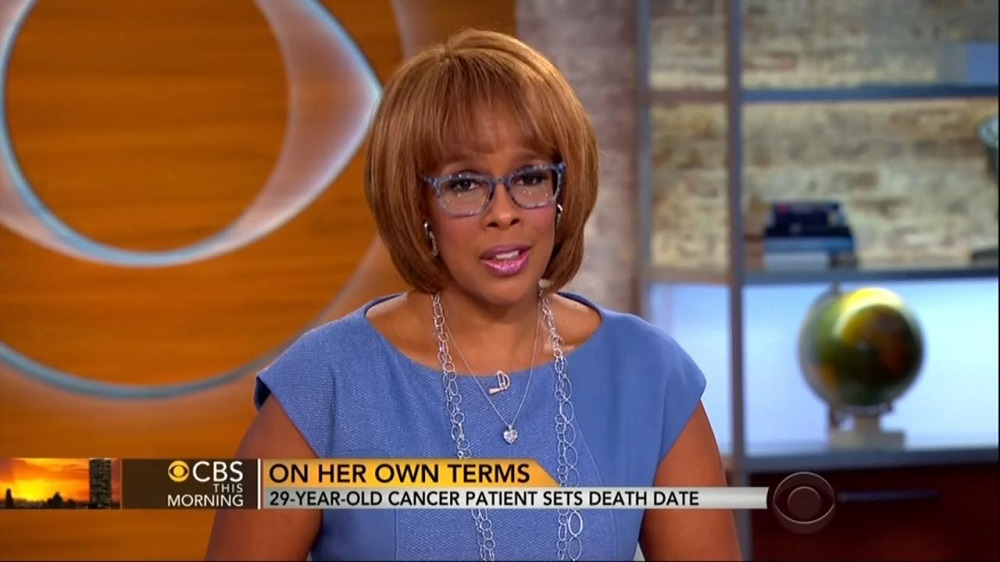 Wednesday's CBS This Morning promoted an Oregon woman's planned suicide, to the point that all three anchors of the morning show acted like cheerleaders for the cancer patient. Charlie Rose lauded the "powerful" testimonial-style video from Brittany Maynard, the "29-year-old newlywed with stage IV brain cancer," as co-anchor Gayle King described her. The newscast aired 47 seconds of Maynard's ad without any soundbites from opponents of euthanasia.

GAYLE KING: A 29-year-old newlywed with stage IV brain cancer is telling the world how she will take her own life on November 1. Brittany Maynard made a Web video to launch a nationwide campaign promoting assisted suicide....Maynard moved from California to Oregon because the state allows assisted suicide. She wants California and other states to pass similar laws.

We all know it's a very sad story, but I was so impressed with her resolve about how comfortable she is with this decision...[S]he's 29! That's what's so hard to accept. But she says she's very comfortable with the decision she's made.

NORAH O'DONNELL: I feel so conflicted about it. And yet, I know she wants to die with dignity, and on her own terms. And I applaud her for that.

CBS has a history of promoting euthanasia. Back in 1998, 60 Minutes devoted 14 minutes to boosting Dr. Jack Kevorkian's "crusade to make mercy killing legal," as the MRC's Brent Bozell labeled it at the time. In January 2006, correspondent Wyatt Andrews was quick to label opponents of Oregon's assisted suicide law "conservatives," but didn't identify the liberal political ideology of proponents.