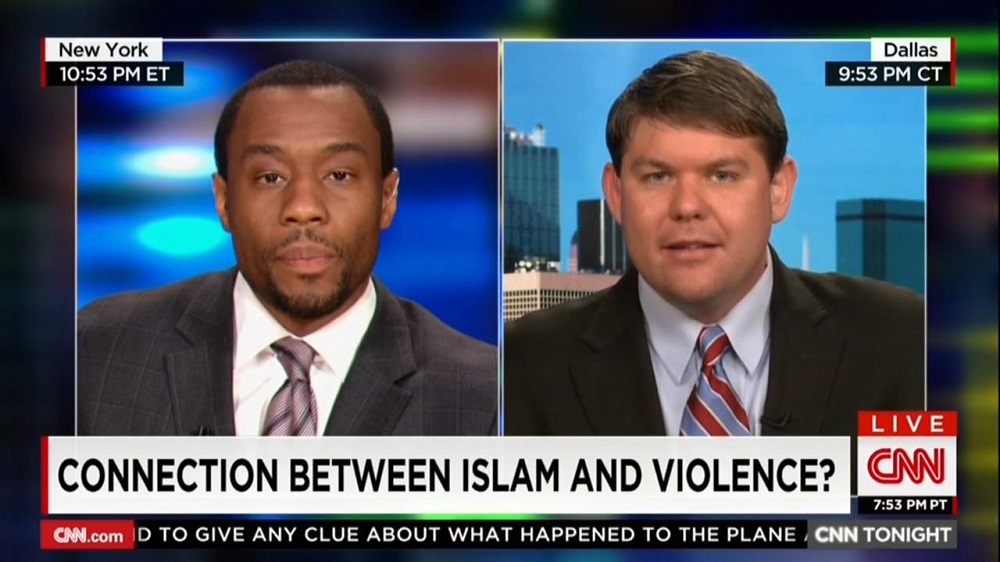 Left-wing academic Marc Lamont Hill blasted atheists Bill Maher and Sam Harris on Monday's CNN Tonight for their blunt views about the Islamic faith: "When he [actor Sam Harris] says that Islam is the mother lode of bad ideas, that is horrific; it is offensive; and, as Ben [Affleck] said...quite frankly, it's racist." Hill contended that "Islam is not uniquely violent or primarily violent or any more prone to violence than any other religion."

Anchor Don Lemon, who recently stongly hinted that Islam was more violent than other religions, pointed out that Maher and Harris were also "arguing about whether liberals have failed when discussing...the treatment of women; the treatment of gays...in the Muslim...world," and asked, "Have liberals failed?" Lemon later confronted his guest with the results of a 2011-12 Pew poll of Muslims from around the globe: [MP3 audio available here; video below]

DON LEMON: ...There is a Pew poll...among Muslims about sharia law and what sharia law means....It says that the percentage who favor the death penalty for converts – the majority of Malaysia, Afghanistan, Pakistan, Egypt...Jordan, Palestinian territory. Many other countries don't have a majority, but they still have a large number. And so, if you look at that, it may not be the majority of Muslims, but...that's millions and millions of people. Is that a problem with religion in general, or just with Islam, Marc?

The CNN host brought on Hill and conservative talk show host Ben Ferguson to discuss Maher and Harris's face-off with actor Ben Affleck over Islam. He first asked Hill, "Do you think that most people paint Islam...with too broad a brush when we ask about violence and oppression committed in the name of religion?" Just before dropping his "racist" accusation against Harris, the liberal commentator claimed that "of the 1.6 billion people who practice Islam...an infinitesimal amount are engaged in any type of fanaticism, as such that we see with ISIS and other groups."

Lemon then followed up with "have liberals failed" question. Hill kept up his politically-correct defense of Islam in his answer:

MARC LAMONT HILL, CNN POLITICAL COMMENTATOR: I think there's a space for to us push Islam, like all other religions, on issues of gender justice; on issues of equality. But the circles that I travel in, we do just that. Inside the Muslim community and outside the Muslim community, there are very progressive conversations going on. Is that everybody? Of course not. But I think there is a conversation to be had, but it can't come at the expense of a fair and even-handed analysis – not just of Islam, but other religions. Islam is not uniquely violent or primarily violent or any more prone to violence than any other religion.

When Ferguson laughed at the last part of his fellow panelist's reply, the anchor asked him to explain his reaction. The conservative commentator referenced a notorious incident where Palestinians celebrated the 9/11 terrorist attacks, which led to Hill confronting him about whether that actually happened:

BEN FERGUSON, HOST, THE BEN FERGUSON SHOW: Name another religion that does what ISIS and what Al Qaeda and what many Islamists agree with and support. Do you remember how many people celebrated in multiple countries around the world on 9/11, when the planes hit the towers? All over the Muslim world, they were celebrating in front of mosques. And to say that this is some small group of people....to act as if other religions do this – they just don't – not in modern-day right now. You can go back hundreds and hundreds of years. But to say that there's other religions doing what they're doing now is – it's absolutely absurd to even imply it.

LEMON: But Marc, that doesn't make it right because Christian countries do it-

FERGUSON: I will say this. Name another religion that – the predominant people celebrating the death of innocent people on the anniversary of 9/11 was – all over the world in Muslim communities. They celebrated it.

FERGUSON: Go look at all of the Middle East! This is where I'm saying you're putting on blinders....

HILL: ...First, the implication in your question – which was that Muslims celebrated 9/11 – is not only offensive, but it's incorrect and there's no evidence-

HILL: Ben there's no – Ben, what is the source of your information?...He's just making it up.

Lemon then raised the Pew poll results, which Hill tried to explain away:

HILL: I think that's often a problem when you have state-mandated religion....there's not necessarily a one-to-one correlation between people who – who vote yes on that poll, and who believe in state-sanctioned violence; who believe in terrorism; who believe in beheadings; who support ISIS...if you go to those very same countries that believe that people – that death is an appropriate penalty for leaving the religion, they also hate ISIS.

Near the end of the discussion, the CNN anchor bluntly asked the leftist academic, "Is it fair to call Sam Harris and to call Bill Maher – who are noted liberals – to call them bigots because...they are asking certain questions about Islam? And they're atheists as well." Hill answered by repeating his "racist" accusation against the two. Lemon also let Ferguson have the final say in the segment:

HILL: Well, I don't think being liberal shields you from being bigoted. There are plenty of bigoted liberals – number one. And number two, I think that – it's one thing to have a critique of religion. It's another thing to have a critique of Islam even. But to – but to bring up fallacious information or unfactual information as a basis for promoting the idea that somehow, Islam is inherently violent or predominantly violent, I think, is problematic. And it does – it is racist. It doesn't mean they're racist. That idea is.

LEMON: Ben, go ahead. I'll give you the last word-

FERGUSON: This is – this is the part that, really, almost makes my head explode – and it's this: you show a poll that is actually talking to millions of Muslims about sharia law-

LEMON: You have ten seconds-

FERGUSON: And a lot of them say that they agree with it. And somehow, many people in this country don't want to believe – when they're telling the truth – about this part of the religion that is incredibly violent to the point of death. Think about that.