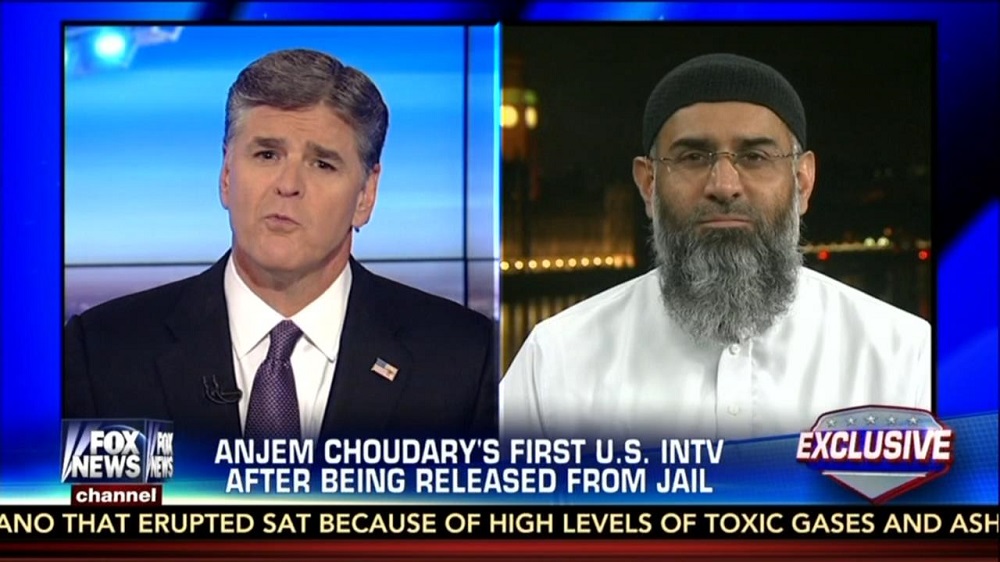 On Fox News's Hannity on Monday, Islamist cleric Anjem Choudary accused the Western media and Blackwater of framing ISIS for the atrocities that the terrorist group has freely admitted to. When host Sean Hannity raised the beheading of British aid worker David Haines, Choudary contended that "the information that we received...is very biased....I don't take my news from Fox News or the BBC. If you look at the people on the ground, I think you'll find that they have a completely different story. The Christians and Jews are living quite peacefully, in fact, in the Islamic State."

When Hannity later noted that "suicide bombers...go into open marketplaces and blow themselves up, and there are people there that are non-political that get killed," the British imam proposed a conspiracy theory: [MP3 audio available here; video below]

ANJEM CHOUDARY, LONDON IMAM: This is just not the reality. You know, if you look, for example, at the marketplaces – which are bombed in Afghanistan and Pakistan – usually, you find it's Blackwater – you know, some American company – the – the ISI of Pakistan – who are killing innocent people, and then, blaming the Taliban. There's nothing called suicide in Islam. There's something called using your body, sometimes, on the battlefield – you know, against the enemy.

The Fox News host led the segment by asking Choudary, "Why would you hold innocent people responsible – regardless of what you think the reasoning is behind it – why would you hold them responsible for something they themselves did not do?" The radical Muslim guest responded with his "very biased" line, and continued that "if you look at what the people are saying, who are holding these hostages, they are willing to exchange them. They are talking about the fact there's no stability and security in Muslim countries because of the U.S. and British foreign policy. So, I think if you look at the whole picture, you'll find, in fact, there's another story." Hannity followed up with his example of David Haines, which the Islamic cleric replied to with his slam of Fox News and the BBC.

Near the end of his interview of Choudary, the conservative TV personality confronted his guest with his own words. The imam, however, just wouldn't give a straight answer:

HANNITY: ...You say people should be proud of the word 'terrorism' – quote, 'proud to be called terrorists;' and that – quote, you 'urge followers to rise up.' You talk about suicide bombers, and you suggest that, well – you know, it's all part of this war. What is the war?..you seem to support ISIS. You seem to support terrorism. You...ask other people to raise up arms – that you yourself have been, obviously, unwilling to do. What is it that you're looking for?

CHOUDARY: You know, Sean, you mentioned many things. I don't think we have enough time to discuss all of them. But, you know, I believe that there are two camps in the world-

HANNITY You said – you urged your cronies to be – quote, 'proud' – I'll tell you when you said it – 'proud to be called terrorists,' and you sneered on a trip abroad funded by benefits when you – when you took a recent trip.

In the following segment, Hannity brought on Father Jonathan Morris, Fox News contributor Pastor Robert Jeffress, and Imam Muhammad Siddeeq for a panel segment about his interview of the radical Islamist activist. Midway through discussion, Siddeq bizarrely cited Pope John Pope II, and raised the recent beheading of a woman in Oklahoma. The Muslim cleric from Indiana denied that the suspect is a convert to Islam:

HANNITY: ...I pushed this issue of 72 virgins. What do you – all these people that are being taught that, Imam – what's your reaction to those that teach them – that if they kill innocent men, women and children, they get 72 virgins in heaven?

MUHAMMAD SIDDEEQ, NUR-ALLAH ISLAMIC CENTER: First of all, Sean – first of all – you – you – what is a virgin? What does the word for 'virgin' in-

HANNITY: I think we all know what the word means, Imam-

HANNITY: That's what these people that put on suicide vests, and kill innocent men, women and children are being told-

SIDDEEQ: I think – I think I should have an opportunity-

SIDDEEQ: Okay. Number one, all I'm saying is why don't you – look, look, this is Pope John Paul, okay? This is (unintelligible) We're dealing with intelligent, good people around the world. We're trying to solve some of the problems-

HANNITY: We're fighting people that are beheading people, declaring war in the name of religion, and they literally are killing innocent men, women, and children every day. We're bombing them. We're at war with them.

SIDDEEQ: Let me ask the question. I just – I just have to say this. I'm not going to indict the good Christians and the good Catholics and the good Jews to try and defend some of these things. But this man had Jesus Christ written on his stomach. His mother said – the one who did it in Oklahoma – his mother said he was a good Christian. Now am I – hold on – am I supposed to indict – am I supposed to-