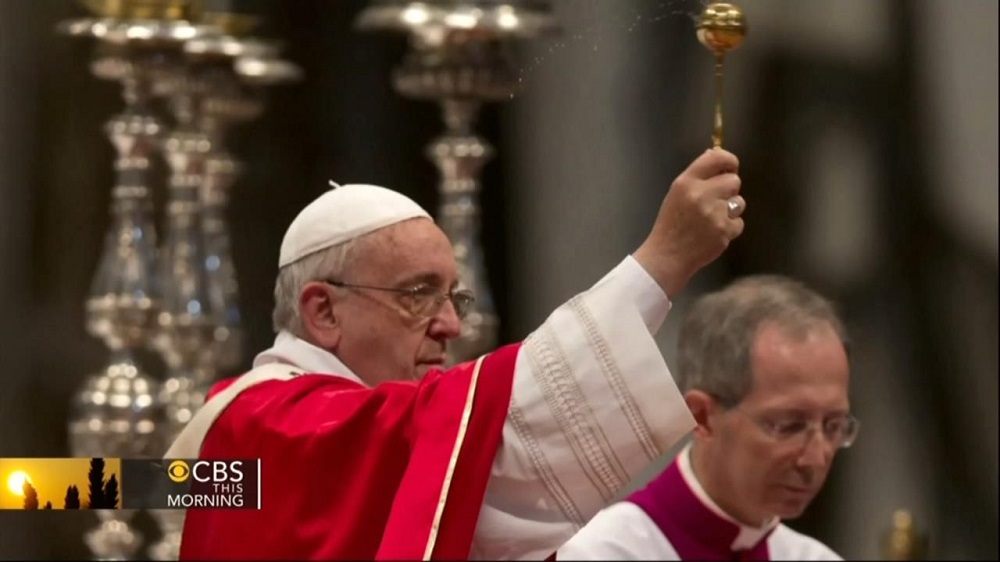 On Monday's CBS This Morning, Don Dahler played up how Pope Francis presiding at the wedding of 20 couples in St. Peter's Basilica is "yet another example of just how progressive [he] has been." Dahler zeroed in on how "according to the Church, some of these couples are technically living in sin. Many have been living together prior to getting married, which is forbidden in Catholicism. Some even have children."

The correspondent failed to mention, however, that the Pope used part of his sermon during the wedding to defend the Church's longstanding teaching that marriage is between one man and one woman: [MP3 audio available here; video below]

...This is what marriage is all about: man and woman walking together, wherein the husband helps his wife to become ever more a woman, and wherein the woman has the task of helping her husband to become ever more a man. Here we see the reciprocity of differences. The path is not always a smooth one, free of disagreements, otherwise it would not be human. It is a demanding journey, at times difficult, and at times turbulent, but such is life! Marriage is a symbol of life, real life: it is not "fiction"!

Charlie Rose led into Dahler's report by noting out that "Pope Francis led a group wedding at the Vatican on Sunday. The ceremony is getting a lot of attention because several of the couples...had not followed church rules." The CBS journalist, who reported from in front of St. Patrick's Cathedral in New York City, pointed out that "St. Patrick's is undergoing a face lift, of sorts, which is a perfect metaphor for what's happening with the whole Catholic Church."

Dahler continued with his "how progressive Pope Francis has been" line, and added his "living in sin" account about some of the now-married couples. He also quickly repeated his chosen label for the Bishop of Rome:

DON DAHLER: Twenty couples gathered Sunday in St. Peter's Basilica to say 'I do' with Pope Francis – the leader of the Catholic Church presiding over the nuptials. But according to the Church, some of these couples are technically living in sin. Many have been living together prior to getting married, which is forbidden in Catholicism. Some even have children. But none of that mattered to Pope Francis, who has been more progressive with his views of the Church and its relationship with the modern world.

The correspondent then played three straight soundbites from Candida Moss, a professor at Notre Dame, whose claim to fame is a book that did its best to cast doubt on the accounts of her earlier martyrs. Moss spun Francis's decision to marry these couples in the favor of the dissenters inside the Catholic Church who want to change dogma to fit their left-wing agenda:

DAHLER: Candida Moss is a theologian professor at the University of Notre Dame.

DAHLER: The symbolic ceremony comes just weeks before the Synod of Bishops, a major meeting on issues of the family. There, Catholic leaders are expected to discuss everything from marriage to divorce, and even contraception. They're also expected to discuss the issue of allowing divorced parishioners to receive Communion – something deeply important to Catholics. The Vatican does not allow divorced Catholics to receive the sacrament.

Dahler played one more clip from a Catholic pastor in New York City, who related his experience with divorced parishoners. But he failed to include any soundbites from talking heads who support the Church's traditional stances on marriage and divorce. The CBS journalist also didn't explain that the Church teaches that for those who have divorced civilly, but didn't remarry, it isn't sinful to receive Communion. It is also unclear whether these couples repented of their past sins before entering into marriage preparation.

This isn't the first time that CBS has hyped Francis as a "progressive" pope. After labeling him a "staunch conservative" early in his papacy, correspondent Charlie D'Agata trumpeted that "Pope Francis is already being described as one of the most progressive popes in modern times."

It should be pointed out that Elisabetta Povoledo of the New York Times followed a similar path as Dahler in her Sunday article on the large wedding at the Vatican. Povoledo even quote from the Pope's sermon, but didn't include his defense of traditional marriage:

In defending the sacrament of marriage, the pope acknowledged that it could become a challenge, that spouses could stray, or become discouraged and "daily life becomes burdensome, even nauseating."

"The path is not always a smooth one, free of disagreements, otherwise it would not be human. It is a demanding journey, at times difficult, and at times turbulent, but such is life," Francis said.