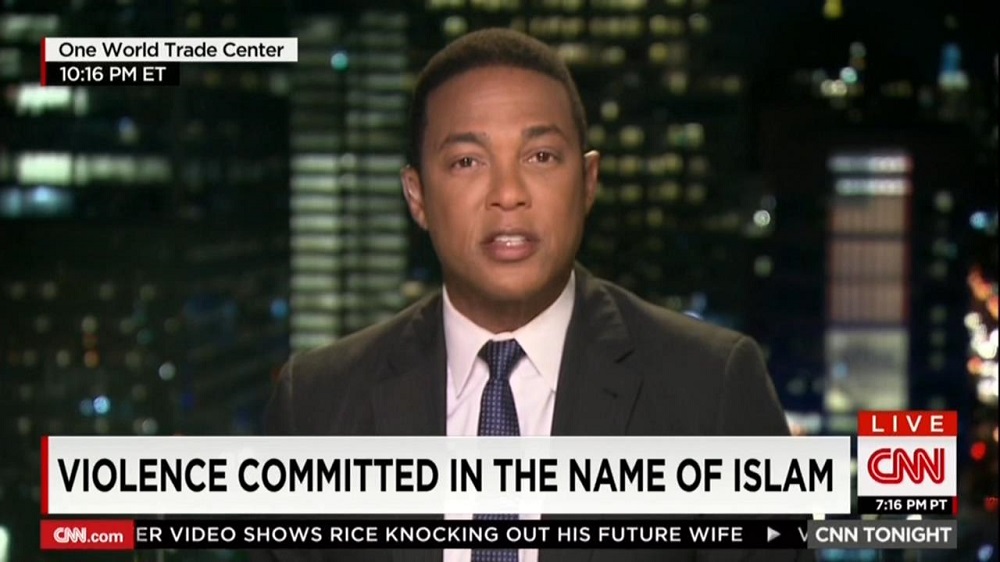 Don Lemon returned to the question of whether Islam is an inherently violent religion on Monday's CNN Tonight, as he interviewed Democratic Rep. Keith Ellison and author Reza Aslan. Lemon turned to his two Muslim guests for their take on a recent Tweet by atheist HBO host Bill Maher: "ISIS, one of thousands of Islamic militant groups beheads another. But by all means let's keep pretending all religions are alike."

Aslan contended that "Islam isn't a violent religion or a peaceful religion. It's just a religion, and like all religions, it is absolutely dependent on the interpretation of whomever follows it." This answer actually surprised the anchor, who cited an oft-used talking point by apologists for Islam. The University of California-Riverside professor continued with a relativistic argument about religion in general: [MP3 audio available here; video below]

The problem, however, is when we take the actions of an infinitesimal group and make it, somehow, predictive of the actions of everyone else – 1.6 billion Muslims, in this case. That's when the argument becomes completely strained and unbelievable.

Representative Ellison then replied to Maher's Tweet by bringing in the history of non-religious ideologies – specifically, atheism/communism:

REP. KEITH ELLISON, (D), MINNESOTA: Well, you know, I think that it's not just religion. It goes beyond that. I mean, look, Stalin was atheist, and he found a way to kill people to advance his ideology – Pol Pot, the same way. The fact is, whenever you have an ideology – whether it's secular or religious – and you're willing to kill and murder other people to impose it on them, you're dangerous, and you're a problem.

And so, I think that – you know – you know, I think Bill Maher, certainly, is an entertaining guy, and I think he brings a lot to the public debate. But there's no doubt that he – you know, that he has a certain perspective on religion. I just think that it's broader than religion. I think it has to do with ideology, and those who are willing to kill to impose it on other people.

Lemon, along with his guests, spent the remainder of the segment on the responsibility of "moderate Muslims" to help combat ISIS and radical Islam in general:

LEMON: Is the burden on other Muslim nations, you think, and moderate Muslims to reject ISIS, and to join the fight against ISIS? Is that what's happening?

ASLAN: Well, first of all, the voice of rejection from organizations and individuals across the Muslim world is absolutely deafening. If anybody thinks that Muslims are not denouncing ISIS, do a Google search and that shall answer your question.

The larger point, however, is nation-states. Muslim-majority nation-states – like Turkey, like Qatar, like Kuwait, who – and Saudi Arabia – who, for reasons of their own national security interests, have not done enough to combat extremist groups, like ISIS, because they feel, in one way or another, that these groups promote their interests in some way. That's got to change. That's not a religious thing. It's just what nation-states do.

ASLAN: Well, to remind them that these groups are as dangerous to them as to anyone else-

ELLISON: I was going to say, let's not forget that this ISIS, sort of, emerges out of Syria – which is a failed state – and there is this – this proxy war going on between different sects of Islam there, and that – we've got to address the problem in Syria sooner or later. We've got to come, as an international community, to try to bring a cessation of violence there, because that's one of the problems with these failed states. Whether it's Syria, Somalia, or anywhere, it allows real bad things to germinate. And that political crisis has got to be solved in order to squeeze on ISIS as well.

I think some of those states thought their interests might be vindicated by supporting certain elements. Now, it's clear that that is a Frankenstein monster.