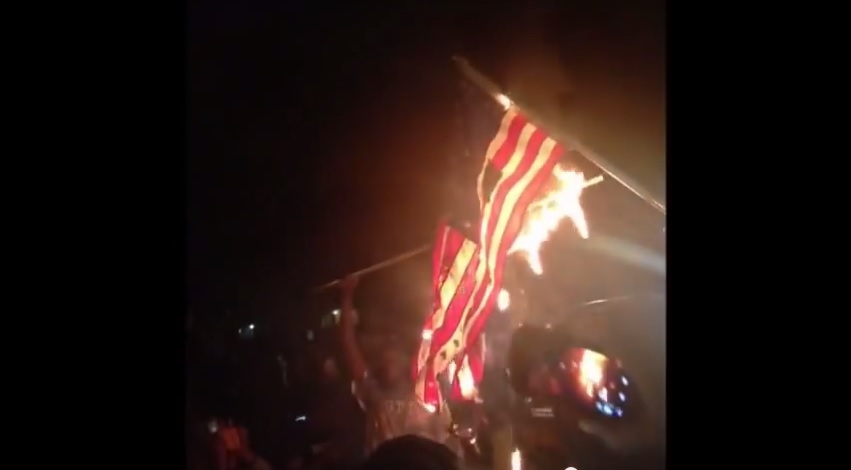 Time was, burning an American flag was a reliable way of getting on network TV, there to shock the taxpayers over their TV dinners.

But these days, the network news programs don’t seem interested in American flag desecration, unless it happens in the Middle East. In the last five years, there have been only two mentions of domestic flag desecration on ABC, CBS and NBC. Both of those were on ABC.

It’s not like mistreating the flag went out with bellbottoms. In fact, it’s enjoying a resurgence. From Occupy Wall Street to Ferguson and on lots of college campuses, lefties like to show their scorn for the nation by burning, dragging, stomping or dancing on Old Glory. They make Internet memes of flag abuse. Public school teachers stamp their feet on the flag in class and tell students “it doesn’t mean anything,” or have students stomp on it as part of an “art project.”

And certainly, there’s no shortage of outrage from the rest of us when some Post-Colonial Queer Studies major defiles the flag over the progressive outrage du jour.  For active duty military and veterans, the flag is special. Their brothers and sisters gave their lives to defend it.

As we mark another Memorial Day and thousands of little American flags adorn the thousands of patriot graves across America, the networks won’t show viewers what punks and professional protesters think of those flags and those sacrifices.

Remember the starry eyed idealists of the Occupy movement? The ones that were going to tear down our unfair system and instead built an unholy mess in cities across the country? Well, along with all their drum circles and up-twinkles and police car defecations, they also enjoyed igniting our national symbol.

One charming event was staged by Occupy Oakland on July 4, 2012. Their “F**K the 4th” parade included vandalism, “Kill Cops” rhetoric and a flag burning. It was at least the third flag burning at Occupy Oakland.

Elsewhere, Occupy Charlotte and Occupy Maine held their own flag burnings. Meanwhile, college campuses were of course reliable flag-burning hotspots. Including at LSU, where in 2011 a communication studies graduate student (really) planned to burn a flag. Sadly for him, hundreds of patriotic counter protesters showed up. He never got to light the flag and had to be taken away in police custody for his own safety. Oh, and his reason for the protest? The arrest of another LSU student for stealing and then burning an American flag.

Reports on the rioting stemming from controversial deaths of black men at the hands of police over the last several months have shown looting, rock-throwing, chanting and sign waving. Only ABC News noted flag burnings. On the October 10 World News Tonight with David Muir showed video as correspondent Steve Osunami introduced a report from St. Louis, saying ,“The streets on fire in Missouri again. They were burning flags and throwing bricks at police.”

The next day on Good Morning America, correspondent Jeff Zeleny said the demonstrations were “marked by burning flags and throwing bricks through windows.”

Meanwhile, defiling the flag seems to be a common activity among the race protesters. Back in December, video surfaced of National Guardsmen in Ferguson rescuing pieces of a flag the protesters had burned on the street. “Just so you know, the Guardsmen have come over to look for pieces of the American flag that got burned,” a police officer says in the video.

“Why is that?” asked the man holding the camera.

“Because it’s an American flag,” the officer said.

“But it means something to us,” said one of the Guardsmen as they attempted to find the pieces of the torched flag.

“I appreciate you guys’ service but it’s a piece of cloth,” said the man with the camera. After the Guardsmen pass he says, “It’s not their flag.”

Flags had already been torched in Ferguson-related protests in Washington, D.C., New York and elsewhere. Then the trend migrated online with the “Eric Sheppard Challenge.”

Sheppard was a student who organized a protest at Georgia’s Valdosta State University that centered around flag defiling. Sheppard has been on the run since authorities alleged he brought a gun to the event. He’s apparently inspired an internet movement in which people film or photograph themselves standing, sitting, walking – or, in the case of this winner, dancing while screaming “F**k yo flag!” – on the Stars & Stripes. 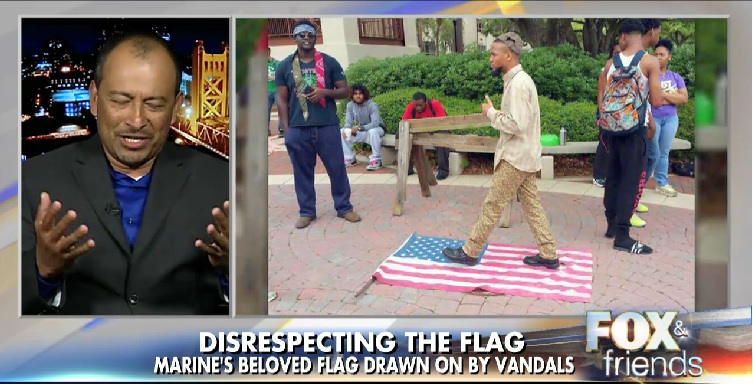 And free-thinking college students around the country copied the Valdosta protest – with mixed results. At Wright State University in Dayton, Ohio, junior Tommy DiMassio’s flag defiling fun was ruined by a veteran who called him a “maggot,” and others who were unamused. He told a local reporter he didn’t expect so “tense” a backlash. “If anything,” DiMassio sniffed, “all that has shown is that people in this area and people on the Internet care more about a symbolic piece of cloth than they do a black person’s life … or, even beyond that, our constitutional rights.”

But some of the others inspired by Sheppard’s flag movement weren’t quite so high-minded. In Stockton California, vandals took the American flag from outside Marine veteran Marvin Herndandez Garcia’s home, scrawled anti-white graffiti on it and smashed the flag pole through the window of his car. The flag was one that Garcia had carried with him through all his Marine Corps deployments.

It would be nice to think that the reason the networks have been so reluctant to show flag burnings is that they’re embarrassed by the actions of their fellow liberals. But that would be giving them too much credit.

It’s probably more because average Americans do get angry at flag desecrations and the people who perpetrate them. Flag burning is “protected speech,” but to most Americans, it’s also hateful speech, and we’re not inclined to sympathize with the miscreant holding the lighter – or his causes. And the advocates at the networks can’t let that happen.

MRC Culture searched Network transcripts for mentions of American flag burning, stomping or other desecration over the last five years.