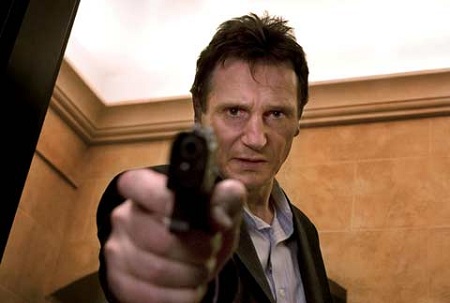 If, like his character in the “Taken” franchise, Liam Neeson has a “very particular set of skills,” it doesn’t include recognizing his own hypocrisy. While the hyper-violent “Taken 3” was pulling down $39.2 million at the box office its opening weekend, Neeson was in Dubai railing against guns.

At a press conference publicizing the film, Neeson segued from a statement of sympathy and concern for Parisians in the wake of the Charlie Hebdo terror attack to complaining about private gun ownership – in the United States. Gulfnews.com reported:

“There’s too many [expletive] guns out there,” he continued. “Especially in America. I think the population is like, 320 million? There’s over 300 million guns. Privately owned, in America. I think it’s a [expletive] disgrace. Every week now we’re picking up a newspaper and seeing, ‘Yet another few kids have been killed in schools.’”

Neeson immediately exonerated himself and his industry from any responsibility for violence. “A character like [Taken’s] Bryan Mills going out with guns and taking revenge: it’s fantasy. It’s in the movies, you know? I think it can give people a great release from stresses in life and all the rest of it, you know what I mean? It doesn’t mean they’re all going to go out and go, ‘Yeah, let’s get a gun!’”

To sum up, disturbed, marginalized people are never tempted to emulate violence they see glamorized in movies and TV. They are driven to their crimes by the sheer abundance of inanimate objects known as guns.